Will the mass resignations of leaders from Mamata’s party help the saffron party? While some believe it could reflect positively, there are some who believe that it could turn out to be a liability for the BJP. 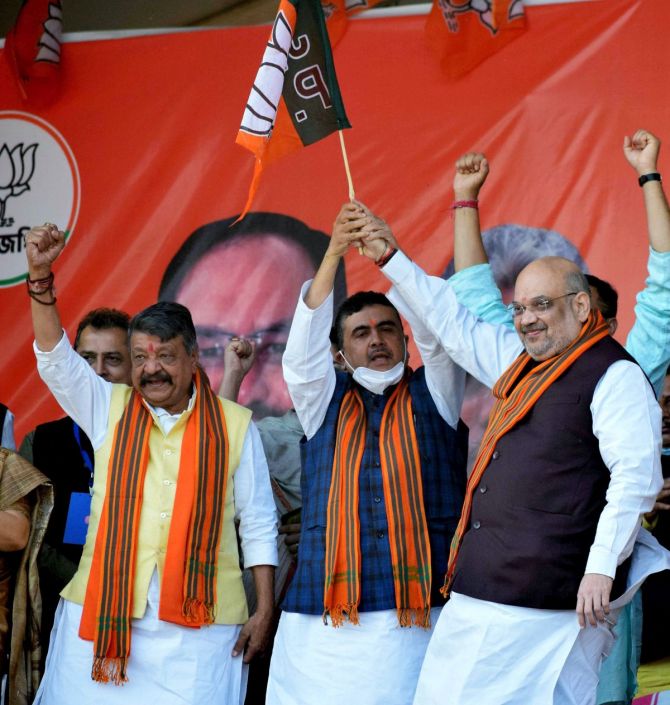 In the many exits that have happened from the Trinamool Congress ahead of the upcoming assembly election, perhaps, Dinesh Trivedi’s would go down as the most dramatic; the MP resigned from his Rajya Sabha seat on the floor of the House on Friday on a call of conscience.

“I am feeling suffocated that we are not able to do anything over the violence in the state. My soul tells me that if you cannot do anything sitting here, then you must resign,” he said, while announcing his resignation during a discussion on the Budget.

The resignation came as a bolt from the blue for the Trinamool Congress, even though there have been many floor crossings between the party and the Bharatiya Janata Party in recent months.

Some crossovers happened in sheer style. Last month, Rajib Banerjee, former minister in Mamata Banerjee’s Cabinet, MLAs Baishali Dalmiya, Prabir Ghoshal, and Rathin Chakraborty, former mayor of Howrah, were flown to Delhi in a chartered plane to join the saffron party in the presence of the central leadership.

Rajib was the third minister to resign from Mamata’s Cabinet, after Suvendu Adhikari and Lakshmi Ratan Shukla. While Adhikari joined the BJP, Shukla, former Indian cricketer, decided to take a break from politics.

All put, it’s been quite a handful for the TMC. But an exodus ahead of the assembly election was along expected lines, especially after the meteoric rise of the BJP in the last Lok Sabha election.

Against the backdrop of Lok Sabha results, a much larger scale of desertion was anticipated, a former bureaucrat pointed out. “It seems, people don’t believe that the ship is sinking,” he said.

Of course, there were early birds like Sovan Chatterjee, former minister and mayor of Kolkata, who joined the BJP in 2019, and Mukul Roy, a founding member of TMC, joined in 2017.

But the question that’s doing the rounds is, will it reflect on the electronic voting machine?

According to political commentator, Sabyasachi Basu Ray Chaudhury, except Suvendu Adhikari, most of the others don’t have a mass base.

Adhikari — who led the Nandigram land agitation on the ground — wields considerable influence not only in his bastion, East Medinipur, but West Medinipur, Purulia and Bankura, as well.

Adhikari apart, the impact of other inductees is debatable. “There is only one leader in the TMC, no one else matters,” Basu Ray Chaudhury said, implying a limited impact, therefore.

On the flip side, some could turn out to be a liability for the BJP, which has been levelling allegations of corruption against the TMC.

“Some leaders who joined the BJP have been linked with Saradha (chit fund scam) and Narada (cash-for-favours sting operation allegedly involving TMC MPs and MLAs). This could become a handicap,” pointed out a political observer.

Communist Party of India-Marxist leader Mohammed Salim said: “This is just a Team 2 of the TMC. They had taken shelter of the state government and are now under the aegis of the Centre.”

The BJP, however, has already decided to be more selective. Earlier this month, BJP national secretary and central observer West Bengal, Kailash Vijayvargiya, said the party would not induct TMC leaders on a mass scale.

But the induction has its importance. Senior BJP leader Chandra Kumar Bose explained elections are all about the numbers game. “People are required to campaign, man booths, etc. When leaders join, they come with their followers. It is essential to reach out to the people,” he said.

There’s also the perception issue; if nothing, it’s an embarrassment for the TMC. It gives the semblance of a feeling that Bengal is headed for a change, said the bureaucrat.

In a way, it’s a déjà vu. In 2008-09, it was the Left Front that was mostly at the receiving end of crossovers. As Salim said, it was led by Mamata and Mukul Roy then. But at that time, other change agents, too, played a key role in ushering in “Paribartan” from a 34-year Left Front rule.

But Bengal has changed since 2011 — the idea of religion is now capturing the imagination of the people. “Real issues like unemployment, industrialisation and agrarian crisis have taken a backseat, as caste, creed and religion take centre stage,” said Salim.