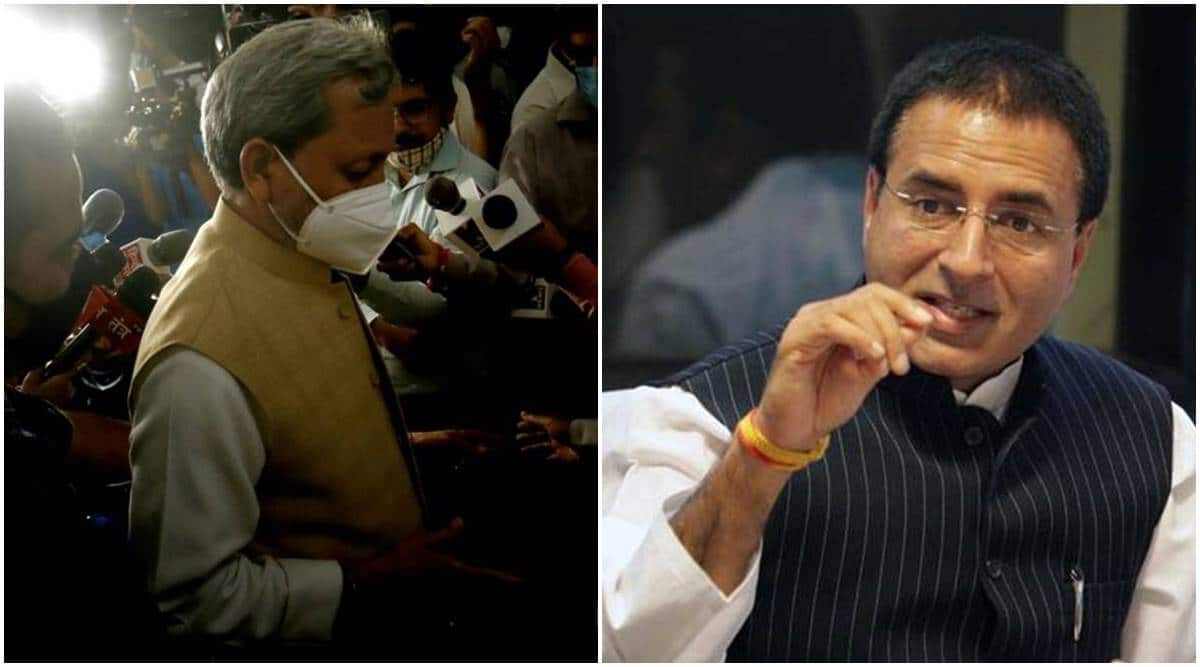 A day after Uttarakhand Chief Minister Tirath Singh Rawat resigned less than four months after taking over, the Congress Saturday held a press conference to dwell on the political instability in the state and accused the Bharatiya Janata Party (BJP) of displaying hunger for power.

Congress leader Randeep Surjewala said, “In 2017, BJP formed a government in Uttarakhand. But instead of working for the development of the state, they went power-hungry and in the last four and half years, two chief ministers have been changed.”

Surjewala also took to Twitter to attack Prime Minister Narendra Modi and BJP chief JP Nadda for betraying the people of Uttarakhand by bringing political instability in the state. “Modi ji-Nadda ji has betrayed the people of Devbhoomi by pushing Uttarakhand into political instability, loot of power and the ‘chief minister swap scheme’,” he tweeted.

In another tweet, he named all the BJP CMs in the state over the years and called it BJP’s “chair changing game” in Uttarakhand. “Three Chief Ministers in Uttarakhand in four and a half years – Trivendra Singh Rawat, Teerth Singh Rawat and the upcoming CM. The previous record of BJP is also the same – Nityananda Swami, Bhagat Singh Koshyari, Bhuvanchandra Khanduri, Ramesh Pokhriyal and Bhuvanchandra Khanduri.”

Talking about the Change of chief ministers in other BJP-ruled states too, Surjewala said they changed CMs in Delhi, Madhya Pradesh and Karnataka earlier. Surjewala further said that the BJP has lost moral ground to rule the state.

Senior Congress leader and former CM Harish Rawat attacked the BJP on Friday, saying it was false propaganda that a by-election could not be held due to Covid or that Rawat was resigning because of constitutional compulsions.

The BJP has called a meeting of its legislative group on Saturday afternoon at the party headquarters in Dehradun.

Late on Friday night, Rawat reached Raj Bhavan at around 11 pm with Cabinet colleagues and handed over his resignation to Governor Baby Rani Maurya, citing the constitutional provision requiring him to get elected to the Assembly within six months, and the unlikelihood of that.

Speaking to mediapersons after submitting his resignation, Rawat thanked Prime Minister Narendra Modi, Union Home Minister Amit Shah and BJP president J P Nadda for trusting him with the post. “Considering the constitutional crisis… I found it appropriate to resign,” he said.

State leaders are questioning the role played by the central leadership in the entire episode, which has left the party in the unenviable position of going before the electorate with two changes of CMs within months.

BJP insiders also point out that the party lost at least one opportunity to get Rawat elected, well in time, when bypoll was held for the Salt Assembly seat in April. The bypoll had been necessitated by the death of BJP MLA Surendra Singh Jeena. On March 29, 19 days after Rawat became CM, the BJP had announced Jeena’s elder brother Mahesh as its candidate.

Asked about this Friday after he resigned, Rawat said he couldn’t contest from Salt as he was down with Covid at the time. He had tested positive on March 22.