On paper, 2 billion shots would mean almost the entire adult population of the country can be expected to be covered by the vaccination drive by December. Realistically though, this would depend entirely on two key factors. On Thursday, the head of the country’s Covid-19 Task Force estimated the “emerging vaccine availability” for the period August to December at a staggering 216 crore — more than 2 billion — doses.

The government’s estimate, Dr V K Paul said, was based on data submitted by manufacturers of eight Covid-19 vaccines.

“We have contacted the manufacturers and sought information on availability of vaccine for August-December… In this period, 216 crore doses would become available in India. Vaccine will be made available for all as we move forward…,” Dr Paul said.

On paper, 2 billion shots would mean almost the entire adult population of the country can be expected to be covered by the vaccination drive by December.

Realistically though, this would depend entirely on two key factors: massive ramping up of vaccine manufacturing, and the availability of critical efficacy and safety data of vaccine candidates. 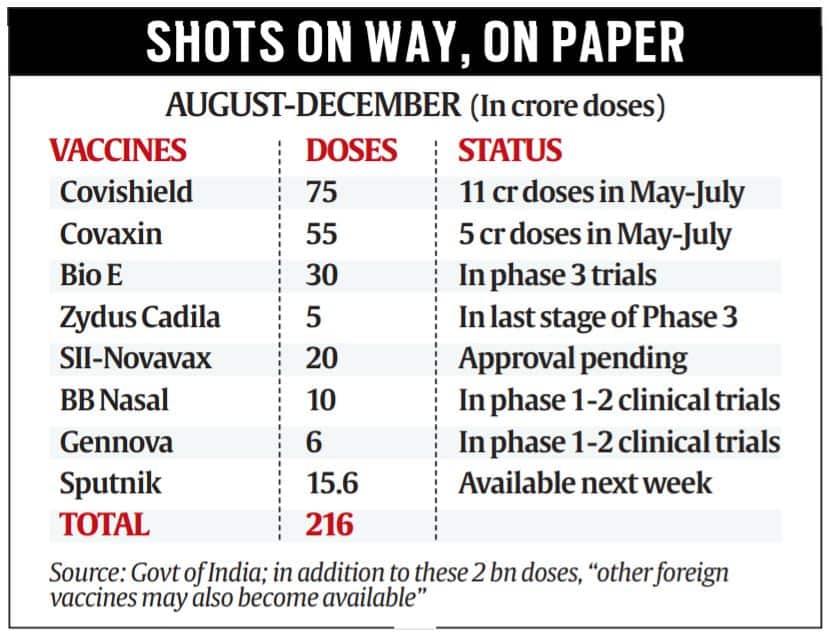 According to the government, the Centre has so far procured 27.6 crore doses of Covishield from SII, of which 16 crore doses will be supplied between May and the end in July. SII will also provide the bulk of the additional 16 crore doses to states and private hospitals. A massive capacity ramp-up will be needed before it is able to supply 95 crore doses between August and December.

Bharat Biotech will be providing 55 crore doses of Covaxin and 10 crore doses of its nasal vaccine, the government said. The company has received orders for 8 crore doses from the Centre, out of which it has to still provide 5 crore between May and end-July. In addition, it has to cater to orders placed by states and private hospitals.

But quite apart from the massive ramping up of capacity that would be required to produce 65 crore doses between August and December, Bharat Biotech’s intranasal vaccine BBV154 — a novel experiment — is, as Dr Paul pointed out, is still in phase 1-2 clinical trials.

The ramping up of Covaxin production will also depend on the efficiency of the three PSUs that will be involved in its manufacture.

“You may say, it is optimistic? Yes it is. Is there a risk? There could be a possibility. However, preparations have started,” Paul said.

Zydus Cadila will “soon apply for licensure” for its DNA vaccine candidate that is currently in the last phase 3 trial, Paul said. It will produce 5 crore doses in August-December, he said. Like Biological E, Zydus’s clinical trials have not gathered pace.

Gennova’s mRNA vaccine candidate will also be seeking licensure, and is expected to produce 6 crore doses, Dr Paul said. However, according to clinical trials registry data, the company began enrolment for phase 1/2 on April 19. The phase 1 study will enrol 120 healthy participants in the age group of 18-70 years.

The Russian-made Sputnik vaccine will be available in limited doses from next week, Paul said.

“Sputnik vaccine has arrived in India. We have received a limited supply. It will be available from early next week in the market. From July onwards, the production will begin and the company expects 15.6 crore (August-December),” he said.

“At this stage, everywhere in the world, there is asymmetry on supply-demand,” Paul said. “However, I can assure you, if I extend this estimate to the early first quarter (of next year), this number is 3 billion doses. Yes, vaccination is a major pillar against the pandemic. This is not the only one, but perhaps the most important going forward. But we have to remember it will take time to cover the entire population. We should accept the reality with humility.”

India, Paul said, was “in a period where there are finite supplies” of vaccines, and “it will take time to come out of this phase”. The United States, he said, has been able to give at least one dose to 46 per cent of its population; in Germany, which has a population of 8.3 crore, 34 per cent have received a single dose or more. “Therefore, it takes time,” he said.