For the moment, Parliament is not heeded to, though it has not been replaced by experts at the expense of democracy. The decline of Parliament is for everyone to see. But does anyone care? 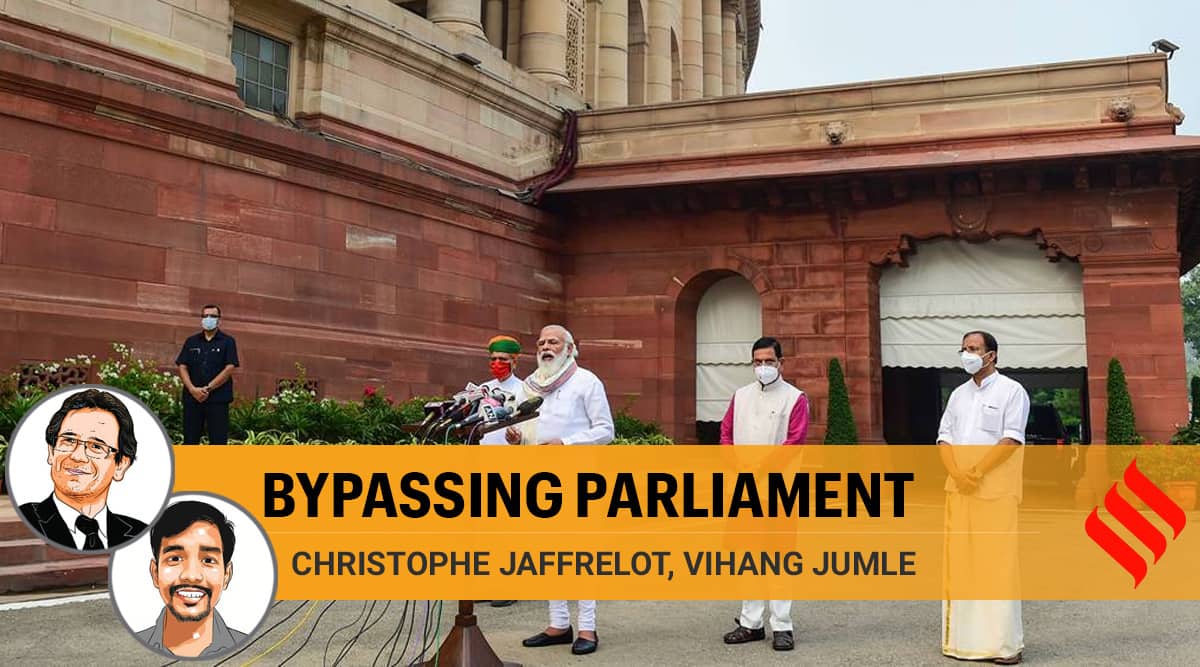 When he entered Parliament for the first time in 2014 as Prime Minister designate, Narendra Modi bowed his forehead to touch the steps, an act that sought to express deep respect for what he called the “temple of democracy”. In retrospect, this episode looks like a piece of theatre: For no Indian Prime Minister has neglected Parliament so constantly as he has. On an average, he has spoken 3.6 times a year in Parliament: 22 times in six years (not more than H D Deve Gowda who was PM for two years). In contrast, Atal Bihari Vajpayee spoke 77 times in six years when he was Prime Minister and Manmohan Singh (who was called Maun Mohan Singh by Modi in 2012) spoke 48 times in Parliament during his 10 years in office.

These statistical data illustrate the populist style of communication of Modi, who prefers to communicate directly with the people, either on the radio (like Indira Gandhi in the 1970s) or via social media (like the US President Donald Trump). These two methods have one thing in common: They reflect a preference for one-way messaging, which obviates the risk of contradiction, and questioning by the receiver.

By definition, Parliament is the crucible of criticism, deliberation and even consensus-making. Parliamentarism stands poles apart from populism, not only because it epitomises representative democracy (in contrast to the direct contact of the leader with “his” people), but also because it treats opponents as adversaries, not as enemies. In order to circumvent Parliament, the Modi government has often followed the ordinance route. While ordinances are usually resorted to by minority governments or coalition governments, the Modi government has used it more than any of his predecessors despite the BJP enjoying a majority in the Lok Sabha. The average number of ordinances jumped from six a year under Manmohan Singh to 11 a year under Modi.

Opinion | PB Mehta writes: Betrayal of procedure in Parliament is not just about technicalities. Deference to process builds trust

Clearly, the Lok Sabha and the Rajya Sabha are ceasing to be places for debates. First, the number of Bills that have been referred to parliamentary committees — the deliberative core of parliamentary work — has shrunk dramatically, from 68 (71 per cent of the total) in the 15th Lok Sabha to 24 (25 per cent of the total) in the 16th Lok Sabha — and zero in 2020! Earlier, parliamentary committees, with a mandate for scrutiny and oversight, used to amend Bills in an effective manner, and train parliamentarians in the art of law making. None of the recent, major pieces of legislation (including the Bill revoking Article 370 and carving two Union Territories out of the state of Jammu and Kashmir) were processed by a House committee. The last Bill referred to a Joint Parliamentary Committee was The Right to Fair Compensation and Transparency in Land Acquisition, Rehabilitation and Resettlement (Second Amendment) Bill in 2015.

Second, several key pieces of legislation have been passed as Money Bills, despite the fact that they did not fit this category. Money Bills have to do with taxation or government spending. But several Bills that had little to do with this definition have been passed as Money Bills under the Modi government. This is because the Upper House — where the BJP is in a minority — cannot amend Money Bills. The Aadhaar Bill is a case in point. The Speaker of the Lok Sabha certified that it was a Money Bill and all the amendments proposed by the Rajya Sabha were rejected.

Third, ordinary Bills are not so much discussed, either because their texts are handed over to the MPs at the last minute or because there is little time for debates. When they are discussed, amendments of the Opposition are usually rejected to retain the originally introduced Bill. If debates exist, they are for formality and procedure. In 2018, even the Budget was not properly discussed in Parliament. The last parliamentary session marked the culminating point of this trend. While in the summer of 2019 (considering both houses), out of 40 Bills, four were passed on the same day they were introduced, in the corresponding session in 2020, three of the 22 Bills were passed the same day. Among them were The Farmers’ Produce Trade and Commerce (Promotion and Facilitation) Bill, 2020 that was opposed by Opposition MPs. When eight of them were suspended, several opposition parties chose to boycott the rest of the session. Thereafter, the BJP MPs passed 15 Bills, including the labour reform laws.

Editorial | Farm bills usher in needed reform but by bulldozing Opposition, government does disservice to reform and Parliament

The decline of Parliament is for everyone to see. But does anyone care? The Supreme Court validated the Money Bill status of the Aadhaar Act after a long wait. A 2017 CSDS report on “The State of Democracy in South Asia” showed that the percentage of the interviewees who supported democracy has dropped from 70 per cent to 63 per cent between 2005 and 2017, and that the percentage of those who were satisfied with democracy had declined even more, from 79 per cent to 55 per cent — 47 per cent of the graduates surveyed shared this view. While they remained attached to a representative form of government, the kind of governance they preferred relied on “strong men” and “experts”: 52 per cent of the interviewees agreed when asked if Parliament and elections should be gotten rid of in favour of a strong leader (42 per cent of graduates and 46 per cent of those in the “25 years and below” age bracket approved). Similarly, 54 per cent agreed when asked if, “We should get rid of elections and parliaments and have experts make decisions on behalf of the people?”

For the moment, Parliament is not heeded to, though it has not been replaced by experts at the expense of democracy. The key question, however, is: How do you make democracy work without a representative body?

This article first appeared in the print edition on October 15, 2020 under the title ‘Bypassing Parliament’. Jaffrelot is senior research fellow at CERI-Sciences Po/CNRS, Paris and professor of Indian Politics and Sociology at King’s India Institute. Jumle is an associate at Ikigai Law, New Delhi