Uttar Pradesh, which is home to the maximum number — 80 out of 543 — of Lok Sabha constituencies, has a greater role to play than any other state in deciding the final outcome of the 2019 general elections. 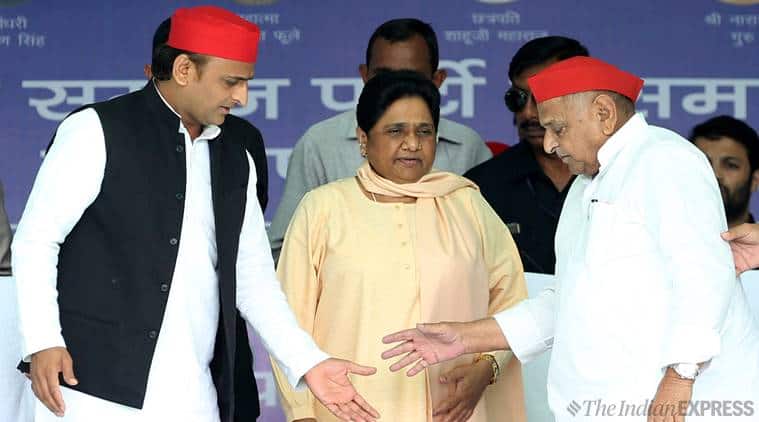 Uttar Pradesh, which is home to the maximum number — 80 out of 543 — of Lok Sabha constituencies, has a greater role to play than any other state in deciding the final outcome of the 2019 general elections. In 2014, riding on the Modi wave, the BJP won 71 seats that had a major bearing on their final tally of 282. The stunning victory also broke the mould of traditional caste politics in the state by propounding the development — or vikas — agenda and unifying the Hindu vote. The Samajwadi Party (SP) was reduced to seven seats and the other regional giant Bahujan Samaj Party (BSP) could not even open its account.

It is widely said that the dynamics of the UP Battleground has changed in the past five years. In the most significant development ahead of the 2019 elections, the Bahujan Samaj Party (BSP) and the Samajwadi Party (SP) joined hands to counter the BJP while putting behind them a quarter century of rivalry.

The deciding factors in the state are largely the Hindutva vote, caste mobilisation, economic reasons and the anti-incumbency against the saffron party though not necessarily in that order.  If ground reports are anything to go by, it seems difficult for the BJP to replicate its 2014 victory. All exit polls except one have predicted at least 58 seats for the BJP-led NDA in UP.

Fearing a repeat of 2014 general elections and 2017 Assembly elections, state heavyweights Samajwadi Party (SP) and Bahujan Samaj Party (BSP) decided to fight the elections together to keep the saffron brigade at bay in UP. The move was significant as it not only united the Dalit-Yadav vote bank in the state but also sent a message across the party lines that how two traditional rivals can keep their differences aside to defeat a common enemy.

The first signs of the possible coalition came last year when Mayawati-led BSP lent outside support to the SP candidates during the bye-elections to two Lok Sabha seats – Phulpur and Gorakhpur. The SP candidates won the two seats, thus paving the way for a formal tie-up between the two parties. Ajit Singh-led Rashtriya Lok Dal also joined the SP-BSP alliance in the state. Talks were on between the alliance and the Congress before the commencement of elections but they did not reach a conclusion. However, they kept the hopes of a post-poll alliance alive by not fielding their respective candidates from the seats where top leaders from both factions were contesting polls. While the Congress left 7 seats for the SP-BSP-RLD alliance, the coalition leaders decided to not field their candidates from Amethi and Rae Bareli, the home turfs of Congress president Rahul Gandhi and his mother Sonia Gandhi respectively.

As per the seat-sharing agreement, SP is contesting 37 seats and BSP 38. Three seats have been given to the RLD–Mathura, Muzaffarpur, and Baghpat.

The Congress has allied with Jan Adhikar Party, Mahan Dal and Apna Dal (Krishna Patel) in a bid to reach out to OBC voters in the state.

The BJP, on the other hand, has allied with Apna Dal (Sonelal) and Suheldev Bhartiya Samaj Party (SBSP) in the state. However, cracks appeared between the BJP and SBSP as the saffron party did not give any seat to the SBSP in the Lok Sabha elections. SBSP chief Om Prakash Rajbhar was sacked from the Yogi Adityanath led state cabinet, along with seven other leaders from the party, as the rift between the two factions came out in the open. The SBSP has a stronghold over Rajbhars, a non-Yadav OBC community, constituting nearly 4.5 per cent of the state’s population. The BJP also came in a coalition with Nishad Party, whose candidate Praveen Nishad had surprised the BJP by winning from the Gorakhpur bye-polls last year on an SP ticket. After switching over to the BJP, Nishad is contesting the elections from Sant Kabir Nagar constituency. In his place, actor-turned-politician Ravi Kishan has been given a ticket from Gorakhpur.

With Mayawati and Akhilesh joining hands, the Dalit-Yadav vote, which earlier used to be divided, is now expected to be polarised against the BJP. However, Akhilesh’s uncle Shivpal Yadav, who left the Samajwadi Party following a rift and formed a party of his own, Pragatisheel Samajwadi Party, might prove to be a bootlegger of Yadav votes.

The Samajwadi Party also enjoys a healthy stake over the Muslim voters, who form about 20 per cent population in the state. But again, not aligning with the Congress may result in the division of Muslim votes. 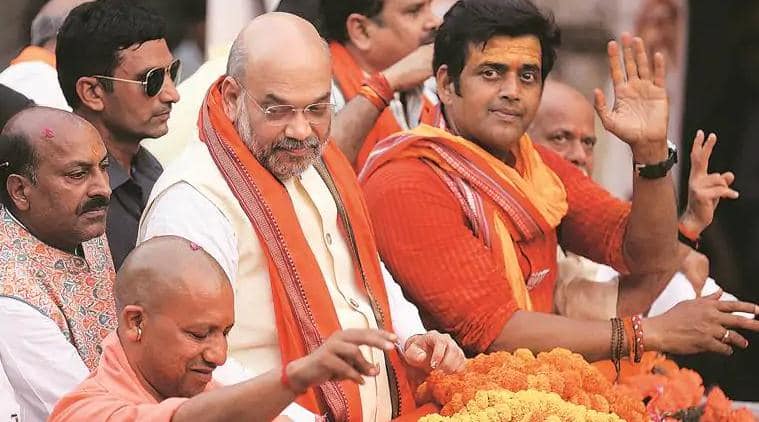 The BJP, on the other hand, is hoping to tap the non-Yadav OBC votes besides cornering the Hindu vote in the state. While the party hopes to target the Nishad votes by fielding Praveen Nishad from Sant Kabir Nagar constituency, their alliance with Apna Dal (Sonelal) could fetch them Kurmi votes. Apna Dal leader Anupriya Patel was also a Union minister in the Narendra Modi cabinet.

Even though the BJP’s alliance with SBSP is in shackles, it is to be seen how much it will affect their overall tally as SBSP chief Om Prakash Rajbhar’s exclusion from the UP cabinet happened only after the polling process was done within the state.

Uttar Pradesh was one of the most campaigned states during this election. One-fourth of Prime Minister Modi’s election rallies were conducted in UP. However, the state was also the ground to most controversial speeches this season.

Topping the list is none other than Chief Minister Yogi Adityanath. The UP CM was barred from campaigning for 72 hours by the Election Commission for his ‘Ali, Bajrangbali’ remark. Targeting the mahagathbandhan and the Congress at a public rally in Meerut, Yogi Adityanath had said, “Tumhe agar Ali par vishwas hai to hamey Bajrang Bali par vishwas hai (If you have faith in Ali, we have faith in Bajrang Bali).” He was also pulled by the EC for calling Indian Army as ‘Modiji ki Sena’.

BSP supremo Mayawati was also barred from campaigning for 48 hours over her appealing directly to Muslim voters in Saharanpur and Bareilly districts during a joint rally of the BSP-SP alliance on April 7. Meanwhile, Priyanka Gandhi Vadra also made her political debut as she took over the mantle of Congress’ East UP General Secretary. Her poll speeches were focused more on the ground problems of the people of the state, like the dues of sugarcane farmers.

Constituencies to watch in Uttar Pradesh In Varanasi, PM Narendra Modi is up against Congress’ Ajai Rai and Samajwadi Party’s Shalini Yadav. Modi had won the seat comfortably in 2014 by over 56 per cent vote share, defeating Rai and Aam Aadmi Party chief Arvind Kejriwal. There were speculations that Congress general secretary from East UP, Priyanka Gandhi, will be fielded against Modi but the grand old party chose Rai instead.

Tej Bahadur Yadav, the ex-BSF jawan who was dismissed for uploading a video on social media about the alleged poor quality food served in forces camps, was fielded by the SP to contest against Modi from Varanasi. But his candidature was rejected by the Election Commission over discrepancies in his nomination papers. 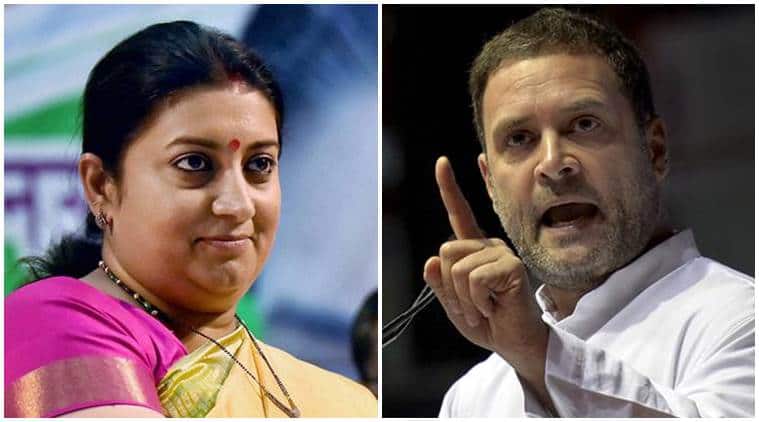 In Amethi, Rahul Gandhi is up against BJP’s Smriti Irani, who had given him a tough fight in the last general elections. His mother and former Congress president Sonia Gandhi is contesting from Rae Bareli Lok Sabha seat against Dinesh Pratap Singh of BJP. 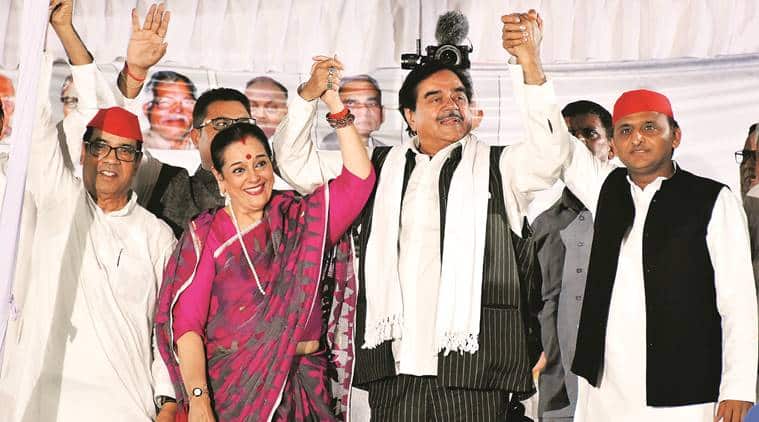 In Lucknow, Union Home Minister Rajnath Singh is up against SP’s Poonam Sinha, whose husband and former BJP leader Shatrughan Sinha is contesting from Patna Sahib constituency. Interestingly, Congress has still fielded its candidate from the seat, Acharya Pramod Krishnam.

In Kannauj, sitting SP MP Dimple Yadav is up against BJP’s Subrat Pathak. Kannauj has been a stronghold of the Yadav family since 1999 when party patron Mulayam Singh Yadav had won the seat. The onus will be on Dimple, wife of SP chief Akhilesh Yadav, to maintain her family stronghold over the constituency. 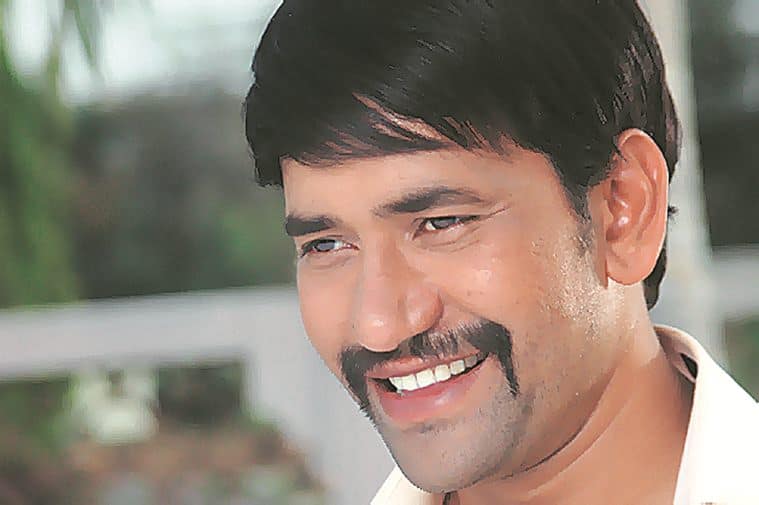 In Mainpuri, SP patron Mulayam Singh Yadav is up against Prem Singh Shakya of BJP. Mulayam had contested 2014 general elections from two constituencies – Mainpuri and Azamgarh – but chose to retain the latter after results were announced. In Rampur, SP’s Azam Khan is up against BJP’s Jaya Prada. During the campaigning phase, Khan had stoked a controversy through his ‘Khaki underwear’ remark against Jaya Prada at a rally. 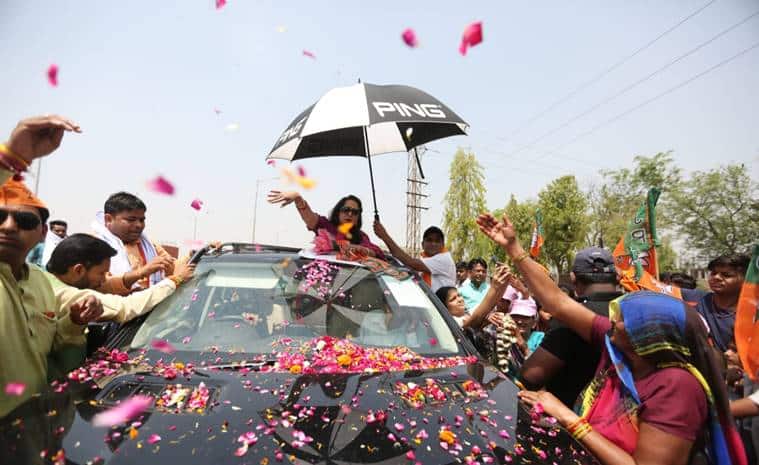 In Mathura, BJP has again shown faith in actor-turned-politician Hema Malini to fight from the seat. She is up against Kunwar Narendra Singh of RLD and Mahesh Pathak of Congress.