"Didi was very confidant of the win. She is expecting good performance in north Bengal and Jangalmahal," said the TMC candidate who attended the meeting. 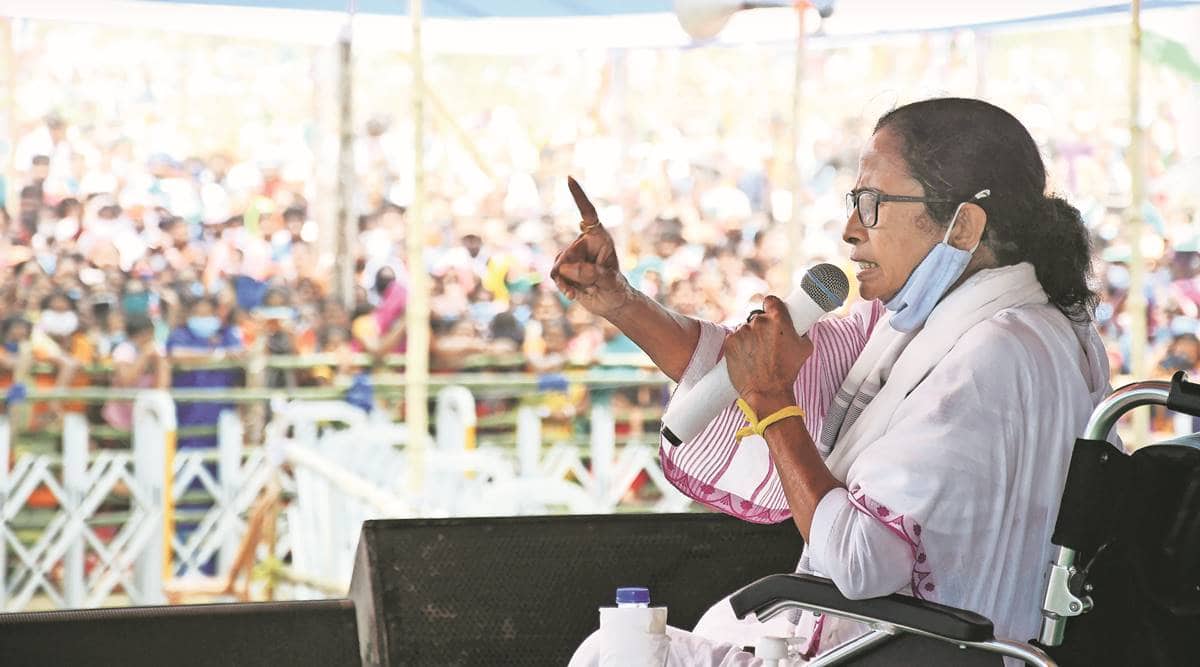 A day after the exit polls predicted a close fight between the TMC and BJP in the Assembly polls, both parties expressed confidence to comfortably cross the majority mark. Votes will be counted on Sunday.

Addressing a virtual meeting of 290 TMC candidates and counting, Chief Minister Mamata Banerjee said her party would bag two-third seats, according to a senior TMC leader. She told counting agents to not lower their guard even if the rival candidate was ahead by “60,000 or 1 lakh votes” and stay put at counting centres until the last vote was accounted for.

“Didi was very confidant of the win. She is expecting good performance in north Bengal and Jangalmahal,” said the TMC candidate who attended the meeting.

The chief minister asked counting agents to avoid cigarettes, tea or any other food from unknown persons and urged them to scrupulously have fill up Form 17. “Counting agents will be given two helpline numbers. They can dial the numbers if they face any problem,” the leader said.

In the meeting, she warned party leaders about BJP’s tactics “to create confusion” at the counting centres.

“Didi said that the BJP controls the media which will prominently show BJP’s leads. But TMC candidates should not lose hope or worry. She instructed us to stay at the counting centre till the last vote is counted and tallied with voter-verified paper audit trail,” said another TMC candidate, who was party of the meeting.

West Bengal BJP president Dilip Ghosh on Friday said he did not believe in exit polls and maintained that his party would win about 200 seats in the Assembly election concluded on Thursday. Votes will be counted on Sunday.

No exit poll result had on Thursday predicted a 200-plus majority in favour of the BJP while most of them indicated either a TMC majority or a close fight.

Ghosh said, “I don’t believe in exit polls. I believe in the exact poll. Some exit polls have shown that the TMC is ahead. Everything will be clear on May 2. What we have said will finally happen. We will win about 200 seats.”

TMC MP Sougata Roy expressed confidence that the TMC would comfortably cross the majority mark. “The exit polls have shown the trend. The TMC will get over 200 seats. Mamata Banerjee will become the chief minister for the third time,” said Roy.

“We will get a full majority and form the next government comfortably,” BJP general secretary Bhupender Yadav said.

Asked about a few poll forecasts that have given an edge to the ruling TMC, he exuded confidence that the saffron party would get people’s blessings.

BJP’s IT wing head Amit Malviya, who was actively involved in the campaign as the party’s co-incharge for West Bengal, also expressed confidence about the saffron party forming its maiden government in the eastern state.

“We will win comprehensively,” he said and dismissed those exit polls that have put the TMC ahead, saying that is not going to happen.