In a joint operation Saturday, an Indian Air Force Advanced Light Helicopter winched divers from the Indian Navy into the lake to measure its depth. As the helicopter hovered 14,000 ft above sea level, the divers plunged into the ice-cold water with handheld echo sounders to calculate the depth. 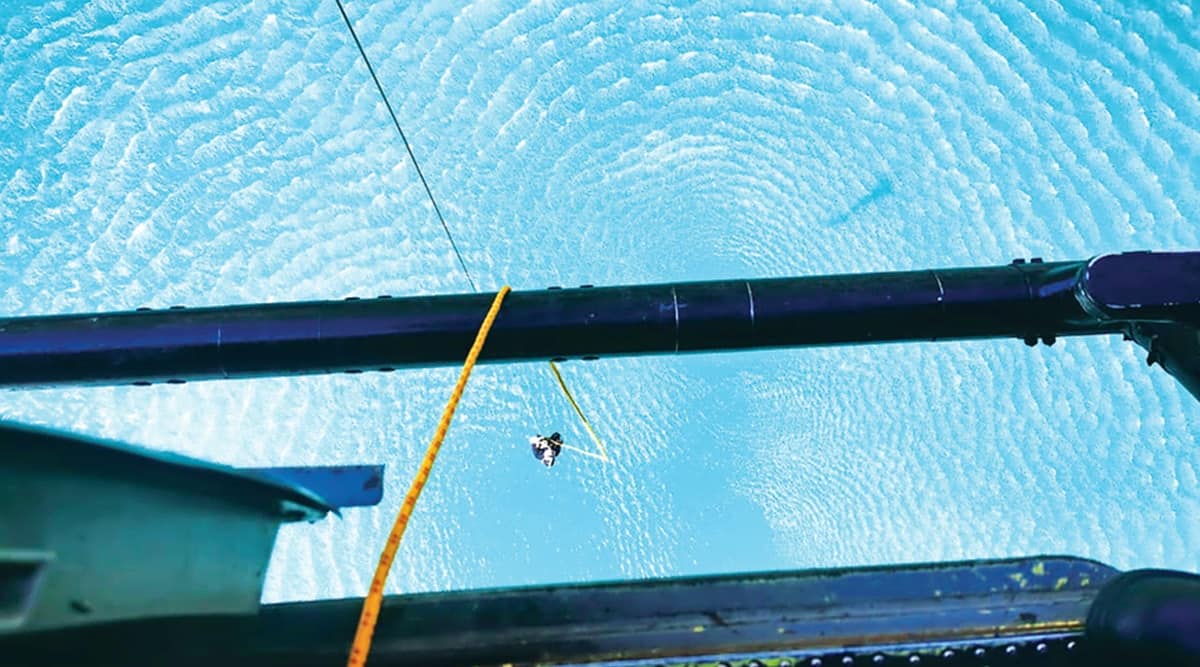 THEY NOW have a number. The lake that was formed upstream of the Rishi Ganga river after the February 7 flash floods in Uttarakhand’s Chamoli district, holding the potential of a fresh deluge, is between 8 metres and 9 metres in depth at different points, and contains about 50,000 cubic metres of water.

In a joint operation Saturday, an Indian Air Force Advanced Light Helicopter winched divers from the Indian Navy into the lake to measure its depth. As the helicopter hovered 14,000 ft above sea level, the divers plunged into the ice-cold water with handheld echo sounders to calculate the depth. In a release, the Navy noted the complexity of the operation, including holding the choppers steady in the difficult terrain.

According to a Navy official, the operation lasted around half-an-hour, starting with the take-off from Joshimath to reach the lake, positioning of the helicopter over it, the dive into the waters to record the depth at several spots, and the return to Joshimath.

Following the operation, Uttarakhand officials said, they assessed the amount of water held in the lake at 50,000 cubic metres. An official said the Navy had measured depth at five spots in the lake, and calculated the average depth at around 8 metres.

“The data is important as earlier we were not able to assess the volume of water in the lake,” said Ridhim Aggarwal, DIG, State Disaster Response Force (SDRF), and Additional CEO, Uttarakhand State Disaster Management Authority. The data will also help scientists determine the pressure exerted by the water on the wall holding it, officials said.

Chamoli District Magistrate Swati S Bhadauria said that with the Navy submitting its report to scientists camping near the lake, further action will be taken as per their decision. The Navy team had been called in to assess the situation as time was of the essence and there was no road access to the lake, officials said.

The SDRF Sunday also installed a Quick Deployable Antenna System near the lake, with video-call facility, to help speedy communications between the scientists and other officials given the lack of mobile network in the area. The QDA System will live-stream the situation on the other ground.

Currently, there are 10 scientists at the lakeside camp, including from the Defence Research and Development Organisation, Geological Survey of India, Wadia Institute of Himalayan Geology and Uttarakhand Space application Centre. Apart from that, seven SDRF personnel are camping at the site to keep a watch on any threat due to the lake.

Aggarwal said the QDA would help them keep a watch on the waters from the base station and better guide the team on the spot. She said while the water is slowly getting discharged from the lake via a channel at the moment, they are looking at “widening that channel for better outflow in a controlled manner. We will also explore possibilities of creating more channels.”

Noting that the volume of water was huge, Prof Y P Sundriyal of Hemvati Nandan Bahuguna Garhwal University’s Geology Department said the wall holding it was made of silt, sand and clay. “If it has not broken so far, it can be assumed there would be no sudden blast-like break off,” Sundriyal said, while advising the administration to ensure that water is drained from it in larger quantities soon.

The toll in the tragedy is now up to 68, with six more bodies recovered. The district administration said 136 people are still missing.

With inputs from ENS, Chandigarh