‘There was plenty of pushing, pulling and jostling going on as everyone wanted to see what was going on at the table.’ Air Commodore Ram Mohan Sridharan — ‘Doc’ Sridharan, as he is popularly known in the Indian Air Force — was commissioned as a helicopter pilot in the IAF in June 1969.

A young helicopter during the 1971 War, Air Commodore Sridharan tells Air Commodore Nitin Sathe about the events of December 16, 1971 — a day that will forever be remembered in Indian military history — in the concluding segment of a fascinating five-part feature. “The entire victory formation of 8 helicopters was ready for take-off with our Commanding Officer Squadron Leader Charu Sandhu fittingly in the lead.

It was late afternoon on December 16 that we set course for Dacca, a mere 40 minutes away from Agartala.

It was a bright and clear day as the helicopters headed to Dacca for the Grand Finale. The outbound flight was uneventful as we flew low across all the territory that our forces had captured and we recognised the places that we had flown on the many operational missions in the last few days. As we approached Dacca, Nanda asked me if I could spot the Dacca golf course close to the Kurmitola airfield. He was an avid golfer while I just hated that game!

Ahead I spotted the Tezgaon Dacca airfield and as we approached it, we saw the big craters made by our fighter bombers. Because of our complete air superiority over East Pakistan, we had been able to operate with impunity and achieve our goals with ease.

This had also allowed our army operations to continue unhindered. The air superiority that we held from the second day of Operation Cactus Lily helped our armed forces to speed up Operation Jackpot to seize East Pakistan and force General A A K Niazi and the Pakistani army to lay down their arms on December 16. We saw the reception party on the ground and adjusted to land one by one with our CO leading the way.

There was loud cheering from the locals as we were herded into different cars and vehicles to be taken to the Dacca racecourse. Nanda, Cariappa and I were in an open jeep as we rushed towards the ground.

The roads were lined with cheering crowds and we could see the ravages of war caused by our air force and army en route.

By the time we reached the racecourse, it was early evening and the surrender ceremony was getting set with all the dignitaries gathering around the tables that had been laid out by our forces. General Niazi took his seat along with the civilian governor and across the table sat General Aurora.

All the other commanders crowded around the table with the surrender document in front of them.

There was plenty of pushing, pulling and jostling going on as everyone wanted to see what was going on at the table.

I wasn’t lucky to get near the table. Only Flying Officer ‘Kruts’ Krishnamurthy managed to bulldoze his way amongst the VIPs around the table. 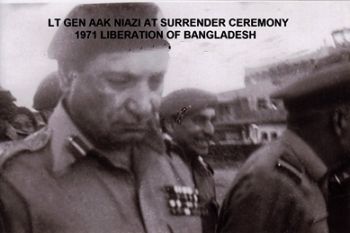 ‘Kruts’ pushed General J F R Jacob, the Eastern Command Chief of Staff, to one side to get a ringside view.

It would have been quite a story if the man who negotiated the surrender with General Niazi had been pushed out of the picture!

Wild cheering erupted as the signing ceremony started. I spent the time talking to some Bengali officers of the Pakistan air force who gave graphic accounts of the cruelties of the Pakistani army and the bravery of the Indian Army’s soldiers as they moved into the streets of Dacca. They wanted us to stay back and celebrate the victory alongside them.

But we had to get back to the Dacca airfield to return to Agartala after these historic moments that we would cherish all our lives.

A new nation was born and we had helped in our own little way in creating this new country. As promised, we did attend the new year celebrations at the Dacca Intercontinental hotel and can never forget the day when we bid adieu to the most happening year of our lives! That is, of course, another story for another time!.”