After dropping to a low of Rs 1,298 apiece, the stock finished at Rs 1,380, its lowest level since November 22, the second day of listing.

Shares of One97 Communications, the parent of Paytm, declined nearly 8 per cent on Wednesday as the 30-day lock-in period for anchor investors ended.

The stock tumbled as much as 13 per cent before recouping some losses.

After dropping to a low of Rs 1,298 apiece, the stock finished at Rs 1,380, its lowest level since November 22, the second day of listing.

Despite being backed by top global investors, including Masayoshi Son’s SoftBank, Warren Buffett’s Berkshire Hathaway, and Jack Ma’s Ant Group, shares of Paytm have been on a wild ride post listing.

Market players said some anchor investors received more allotment than they had desired in the anchor book, prompting them to pare holdings. Nearly, Rs 1,800 crore (Rs 18 billion) worth of Paytm shares changed hands on Wednesday. 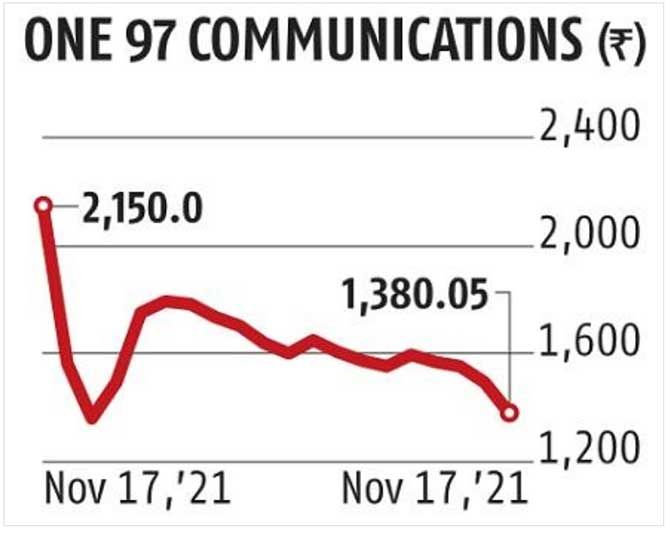 Among the investors who got the highest allotment in the anchor book were Blackrock, Canada Pension Plan Investment Board, and Singapore’s GIC.

According to an analysis by Edelweiss Alternative Research, ahead of the expiry of the lock-in, anchor investors held nearly 5.9 per cent stake in Paytm — slightly more than other new age companies such as Nykaa (4.5 per cent) and Policybazaar (5.8 per cent).

Shares of Nykaa and Policybazaar had fallen 2 per cent and 3.5 per cent, respectively, after their lock-in periods ended.

The fall in Paytm shares after the lock-in’s expiry is more than that seen by most other companies this year.

According to Edelweiss, 25 of the 41 IPOs this year have ended in losses on the day of lock-in expiry. However, the average decline is just 2.2 per cent.

Market experts say investors are still grappling with how they should value Paytm, which has no clear profit visibility.

In the September quarter, the first quarterly results declared by the company after going public, Paytm reported widening of losses to Rs 474 crore amid rising expenses.

Revenues, however, soared 60 per cent thanks to strong growth in its financial, commerce and cloud services businesses.

Macquarie Capital, JM Financial, and Dolat Capital are among the few brokerages that have coverage on the stock at present.

Macquarie has an ‘underperform’ rating and JM Financial has a ‘sell’ rating.

Meanwhile, Dolat has a ‘buy’ call on the stock with a price target of Rs 2,500, 16 per cent higher than the IPO price.

Analysts at Dolat believe Paytm has as one of the strongest digital brands to garner a significant share of opportunities that will evolve in the Indian Internet ecosystem.

*Kindly note the image has been posted only for representational purposes. 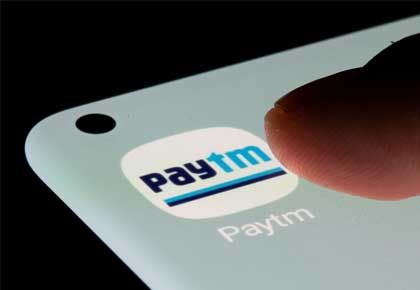