As every principal political player in Uttar Pradesh makes a beeline for the Brahmin votes before the assembly elections, the Bharatiya Janata Party that has retained the bulk of the community’s votes since 1989, barring interregnums in 2007 and 2012, is worried.

The BJP’s quandary over keeping Ajay Mishra Teni, minister of state for home in the Union government, stems from the fear of upsetting Brahmins in UP.

Since 2017, the Yogi Adityanath dispensation has been criticised on various counts for ‘shortchanging’ Brahmins after getting their votes, an important reason being the community’s alleged under-representation in the Centre and the state.

Teni, a Brahmin from Lakhimpur Kheri in the Avadh region, was inducted to stave off this criticism.

Early on, the Samajwadi Party and the Bahujan Samaj Party spotted the cracks in the BJP’s Brahmin edifice and tried to slip through the fissures to broad base their own support. The SP’s and the BSP’s assiduous wooing of the Brahmins created a perception that the community had now become a tilting factor in the elections, instead of the usual suspects: Dalits, Muslims and backward castes.

Lucknow’s veteran political commentator Brijesh Shukla’s assessment was, “If we examine ground realities, it looks like the Opposition is strapped for issues while courting Brahmins. I am not sure if the issues they have flagged and focussed on will yield positive results.”

Shukla cited the SP’s and the BSP’s brouhaha over the cancellation of a holiday as an example. One of Adityanath’s first moves as chief minister was scrapping the gazetted holiday to commemorate Parshuram Jayanti.

A lesser-known figure in the Hindu pantheon, Parshuram was embraced by the heartland’s Brahmins because he denoted a muscular quality that was manifest when he, as widely believed, annihilated the Kshatriyas 21 times to avenge the killing of his father by a Kshatriya king. Adityanath is a Kshatriya. Therefore, the decision to call off the Jayanti was construed as an ‘affront’ to the Brahmins.

“Two decades earlier, Parshuram was not deified by Brahmins but now he has become a god for every party,” said Shukla.

The SP and BSP, followed by the Congress, pegged their campaign to draw the Brahmin votes on Parshuram and another incident, the killing of Kanpur gangster Vikas Dubey in a police encounter in July 2020.

“Does it behove these parties to seek the Brahmin votes in the name of a notorious criminal” asked Shukla.

The SP, however, underplayed its initial emphasis on Parshuram and Dubey. SP Spokesperson Udai Veer Singh maintained, “Our legal cell took up the cases of atrocities committed against Brahmins.”

Abhishek Mishra, the SP’s national secretary tasked with conducting the Brahmin outreach, said, “It was the push factor that worked in the case of Brahmins. There was demand from the community to redress their issues. Whatever we did was within the legal and constitutional framework.”

“We have not promised the moon,” added Mishra. “We have assured the Brahmins of their share of representation in the power structures.”

Two contrarian views emerged on the degree of impact that the SP and the BSP’s pro-Brahmin drive had.

“There was nothing new in their campaign. Brahmins had tried and tested Mayawati (BSP president) in 2007. They were disillusioned because only her close political aide Satish Mishra (a Rajya Sabha MP) and his family benefitted,” said Hemant Tiwari, a senior Lucknow journalist.

“Akhilesh Yadav (SP president) had a chance to nurture and project the Brahmin faces but he didn’t. The SP’s so-called Brahmin leaders lack a mass base,” added Hemant Tiwari. 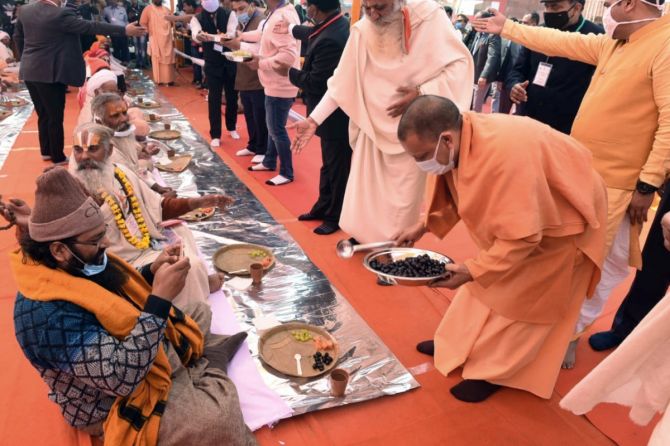 A political observer from eastern UP disagreed. “Brahmins are equally divided between the BJP and the SP this time. The SP is pretty much in the same position as the BSP was in 2007. It is getting Dalit and non-Yadav backward caste votes. Important Dalit and OBC leaders who were with Mayawati have joined the SP. So, it’s building a critical mass of votes which has convinced Brahmins that a vote for the SP to teach the BJP a lesson will not be wasted.”

Amarnath Mishra, who heads Lucknow’s ‘Brahman Sansad’ (parliament of Brahmins), counted among the more influential caste lobbies, hit out at the BJP.

“In the panchayat elections, most Brahmins voted against the BJP. Its leaders made Jitin Prasada a minister even though he had opposed the BJP and exhorted upon the Brahmins to vote them out. The few Brahmin ministers in the Adityanath government cannot even appoint their own staff,” said Amarnath Mishra.

“In Lakhimpur Kheri, Brahmin workers of the BJP were assaulted and killed. Did the party bother to offer compensation and express remorse? No.”

BJP sources admitted that the Brahmins have taken note of the inherent pro-Kshatriya character of Gorakhpur’s Gorakhpeeth monastery which Adityanath heads. “This has made the CM ‘anti-Brahmin’,” said a source.

Yet, at the end of it, these sources sounded sanguine that the Brahmin votes would remain with the BJP.

“The only fallout of the SP and the BSP’s outreach is that they will field a large number of Brahmins as their candidates. If these people don’t win, they can start a political business in their constituencies and prosper.”