Since its first flight in 2001, India’s homegrown Tejas light combat aircraft has faced two decades of unrelenting opposition from the Indian Air Force.

For long, the fighter pilots who make all the key decisions in the IAF opposed the indigenous fighter’s entry into service, arguing that it lacked the performance needed for surviving in the highly-contested airspace that would prevail in an India-Pakistan or India-China war.

Only last year was the ministry of defence able to push through an order for 83 Tejas Mark 1A fighters — an improved version of the aircraft that will start being delivered in a couple of years.

With this endorsement from the IAF, there is interest in the fighter from other regional air forces, including those of Malaysia and Sri Lanka.

In sharp contrast to the IAF, the Pakistan air force wholeheartedly supported its own fighter — the JF-17 Thunder, which Pakistan and China co-designed as a no-nonsense, light fighter that met unambitious performance benchmarks without endless scrutiny and comparisons with the cutting edge in military aviation.

With the National Democratic Alliance government setting great store by ‘Make in India’ and aatmanirbharta (self-reliance), it is worth comparing the Indian and Pakistani approaches to their light fighters and drawing lessons for indigenisation.

In defining the Tejas programme as it did, the Defence Research and Development Organisation (set itself the aim of leapfrogging technologies and catching up with the world. This high-risk gambit involved going straight for a fourth generation (Gen-4), state-of-the-art aircraft.

Old-timers admit it was pure technological arrogance to reason: ‘I’ve never made an aircraft earlier, but I’ll start by developing a Gen-4 fighter.’ Astonishingly, this risky strategy worked!

In contrast, China-Pakistan chose a very different, low-risk path: To utilise the technologies China already had and realise an aircraft into service quickly and cheaply.

The JF-17 is a heavily re-engineered MiG-21, which allowed a more modest development trajectory.

The core of a fighter development problem is technology and risk management. Since China already had the technologies, the risk was minimal. The Pakistan air force knowingly chose a less capable fighter, whose performance shortfalls could be compensated for with numbers.

In taking forward the Tejas project, the Aeronautical Development Agency — the DRDO agency that was made responsible for developing the Tejas — ambitiously incorporated four Gen-4 technologies into the new fighter.

These were a, Unstable design and digital flight control;
b. Building major aircraft structures (wings, fuselage, etc) with lightweight composite materials;
c. Microprocessor-based controls for on-board utilities (such as fuel):
d. An all-glass cockpit, which meant the pilots flew and fought with smart, digital control panels, enabling them to do more.

With an unstable design, safety demands that flight control systems must be quadruplex — which means catering for three levels of failure. Ninety per cent of the design effort goes into managing failure. 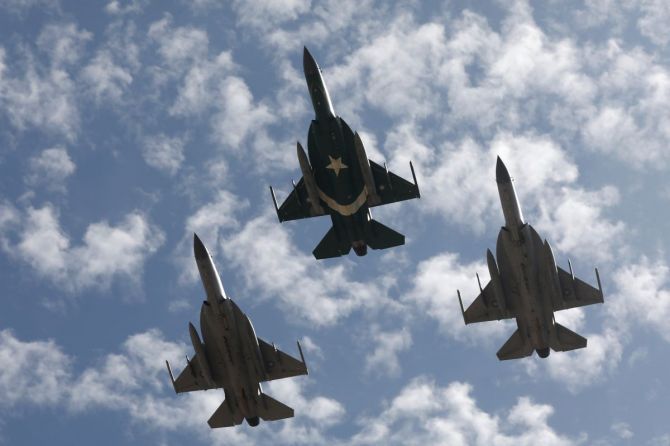 The Tejas was, therefore, the most advanced aircraft in the IAF’s fleet. Even the Mirage 2000, with a similar delta-wing design, is a Gen-3 aircraft with ‘relaxed stability’, but not a fully unstable design. That is half a generation behind the Tejas.

Having thus saved a significant amount of weight, the Tejas can carry more payload, increasing its operational range and strike power.

In contrast, the JF-17, a Gen-3 aircraft that China developed for export, is constructed of aluminium alloy. As a result, it is almost a tonne heavier than the Tejas and, therefore, carries less fuel and armaments.

However, the Tejas has a problem with its air intakes design. This stems from initial confusion about its role, which was to replace the MiG-21 as the IAF’s light fighter.

Since the MiG-21 was designed for high-speed interceptions at speeds of Mach 2 (twice the speed of sound, or 2,500 km per hour), the Tejas designers worked for a top speed of Mach 1.8. However, they chose fixed air intakes, which are suitable only for speeds up to Mach 1.4.

Higher speeds require more sophisticated air intakes, incorporating moving intakes, cones, etc. The Tejas’s fixed air intakes reduce its thrust by 30-40 per cent. Even so, the fighter is good for Mach 1.2-1.4, the regime where most air battle engagements actually occur.

Lower speeds save fuel and increase mission flexibility. Experience showed that when the MiG-21 climbed at Mach 2 to high altitude and the engagement was aborted, it was left without the fuel needed for another mission and had to return to base for refuelling.

For that reason, the Tejas Mark 2 will be optimised for air combat engagements at Mach 1.2. With the design skills in the Aeronautical Development Agency, that can easily be done.

Both the Tejas and JF-17 have had problems in choosing engines.

The Tejas was to be powered by the DRDO’s Kaveri turbofan engine, but, due to development delays, the Aeronautical Development Agency chose the General Electric F-404 instead.

In China, the JF-17 developers chose the Russian RD-93 after-burning turbofan due to its low fuel consumption and price.

However, the RD-93 delivers inadequate power — a dry thrust of 50 kiloNewtons (kN) and 81.3 kN thrust with afterburner.

This is significantly lower than that of the Tejas Mark 2. Its GE F-414 engine, with 35 per cent more thrust than the F-404, will deliver a robust 60 kN of dry thrust and 98 kN with afterburner.

The JF-17 is likely to be upgraded to the Chinese WS-13 engine, but its development is clouded in uncertainty.

Upgrading to a higher performance engine requires the freedom to redesign the basic aircraft.

A higher thrust engine such as the F-414 or the WS-13 is heavier than the engine it replaces and, therefore, upsets the aircraft’s balance, forces design changes and, being heavier, consumes more fuel. So an upgraded engine often delivers disappointing performance.

In sum, the Tejas has emerged as a light multi-role fighter with Gen-4 technology and innovation, such as its unique aerodynamic configuration, the use of composite materials and its advanced avionics.

With its design in Indian hands, it can be easily modified into variants, such as a naval fighter or a lead-in fighter trainer. It can also be tailored to suit export customers’ requirements.

The JF-17, in contrast, is a Gen-3 fighter that cannot be tailored for export customers beyond a point.

On the plus side, its off-the-shelf materials, sub-systems and systems cut costs and reduce design risks, making it a cheap and reliable fighter for air-to-air combat.