"While physical theatre allows us to raise the level of performance through the use of high-quality production aspects like stage, lightning, instruments, etc., the digital mode suffers in this aspect. With laptops, handheld cameras, and makeshift props at home, one can raise the bar only so much." 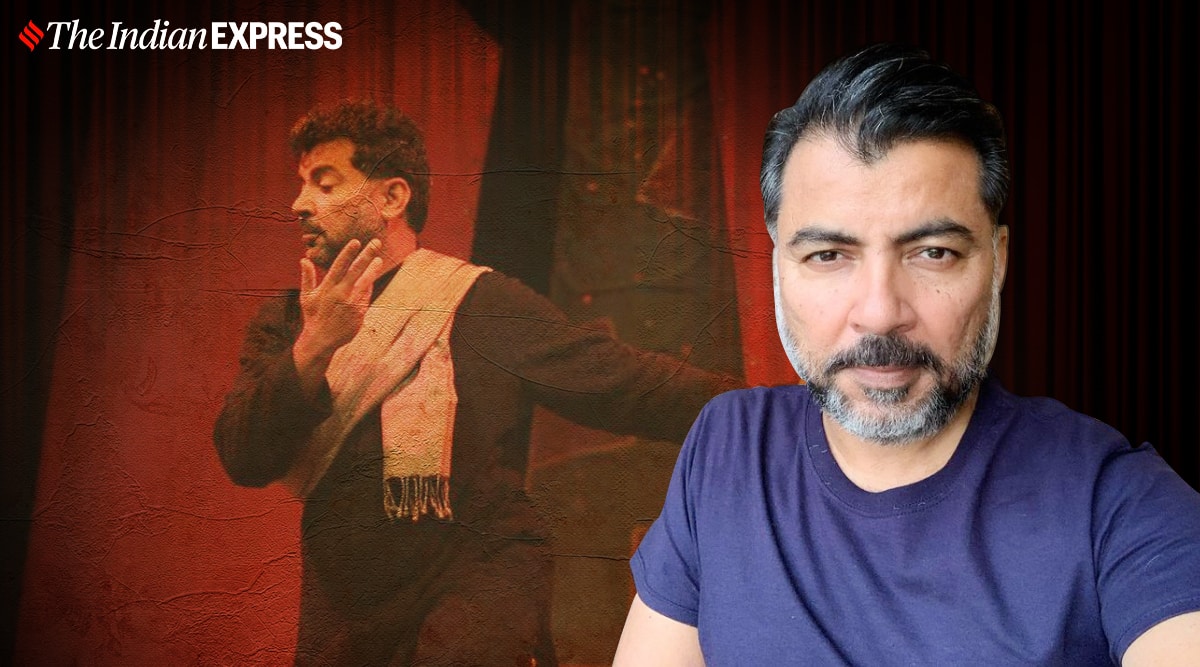 Poet, actor, dastango–Danish Husain dons many hats. And if you ask him to pick one, you are not likely to get one answer as he does not “pigeonhole” these pursuits and “finds himself immersed in all the different forms”.

Husain, who was recently a part of the One Page Spotlight literary festival, talks to Indian Express about his journey, pandemic experience, being an artiste in the present times and his views on language battles in the country.

You have been instrumental in reviving the lost art form of Dastangoi; how has your journey been over the years?

When I embarked on this artistic journey, I had certain preconceived ideas about various things. The journey unravelled something remarkably different from what I had expected. It has been a real privilege to be associated so closely with this great adventure. I remember when I first joined it, I assumed it to be like any other theatrical production — 5, 10, 15 shows at the most before I move on to the next play. But in this case, the production evolved into a whole new art form and since then has gained tremendous popularity.

It soon paved the way for Qissebaazi; can you highlight the difference between the two projects?

So basically, there is one organic distinction between the two. Dastangoi is a specific art form of storytelling in Urdu, especially the stories of Amir Hamza, whereas Qissebaazi involves performative storytelling through a multitude of Indian languages. The underlying intent was not just to perform stories in Urdu but also to assimilate stories from other languages such as Odiya, Marathi, Malayalam or Tamil. We also came up with a bilingual storytelling format, where parts of the story are performed in the original language whereas the other parts are performed either in English or Hindi, which we can call the ‘bridge language’.

The other thing that differentiates Qissebaazi from Dastangoi is that in the latter, essentially two actors perform the storytelling while seated, but in Qissebaazi you can move around the stage. Actors are free to sing and incorporate musical instruments in their performances. Anything which facilitates storytelling is permitted in Qissebaazi.

The pandemic also opened various virtual avenues for artistes. How was your experience with the virtual medium, including social media?

Well, when the pandemic struck, I was in the US for a performance and to deliver a lecture at Princeton University, and had to be confined there for four-and-a-half months. During the initial lockdown period, I had no clue it would be extended to such a long time. In a matter of time, the entire world was at an utter standstill. There was an air of doom and uncertainty as to what will happen next. So, the art community started interacting through new digital platforms such as Zoom meetings, Zoom calls, integrated performances, etc., which weren’t a part of the pop culture environment before. As things like Instagram live, Facebook live, etc., became the new normal, I was surprised by the potential of digital mediums to serve as a tool for performance. In place of original theatre venues, Zoom app becomes the theatre as everybody flocks to it.

When we perform in a film, we ignore the camera but in a digital performance, one has to look directly into the camera. During the initial days, it was quite a disorienting experience to perform to a phone or a laptop camera. It was also very discomforting to look at your face on the screen while performing.

Further, as stage performers, we were used to live feedback from the audiences. It took me a while to understand the scrolling comments were the feedback. That one needs to occasionally respond to make the performance more participative.

While physical theatre allows us to raise the level of theatrical performance through the use of high-quality production aspects like stage, lightning, instruments, etc., the digital mode suffers in this aspect. With laptops, handheld cameras, and makeshift props at home, one can raise the bar only so much. In terms of convenience, the digital performances are quite effective because the audiences can enjoy them from the comfort of their beds.

Not only your stellar storytelling, you are equally admired for your powerful acting skills. What is it that you enjoy the most?

I enjoy dabbling in both. Otherwise, why would I do it? I pursue everything and anything that interests me. If a certain aspect belonging to any practice resonates with me, I am up for it. And frankly speaking, I love all of it, whether it is storytelling, acting, poetry, or music. It’s all one fluid state of existence.

You were part of One Page Virtual Spotlight Literature Festival with the theme ‘Breaking the regional barrier’. There has been a lot of debate about the imposition of Hindi in the country. What is your take on the same?

I am of the opinion that nothing should be imposed on anyone, whether language, religion, ideas, dietary habits or anything for that matter. I love and adore all languages equally, including Hindi in which I perform regularly. People should be introduced to things in an inclusive and friendly way. More than treating ideas or languages as adversaries if we delve into their histories and how they entered into popular consciousness, we may have a better understanding of our world and the things we have inherited. And I also think once people become aware of the similarities in languages, all imposition turns ineffective.

When we make people truly comfortable, spread love all around and create a vibrant and art-loving community, things work better. My recent association with One Page Spotlight’s Virtual literature festival allowed me to express solidarity and universal brotherhood between all languages, and of course their speakers. I was really happy to be a part of the literature festival; not a lot of organisers think to go offbeat and organise something focusing completely on regional languages. I believe this step will further pave the path for a novel discursive dialogue in literature and arts.

What role can artistes play in breaking the regional barrier?

Most performative arts do not have the necessary wherewithal for an expansive outreach. They, therefore, often rely on external support like government grants, infrastructure and logistical support, private sponsorship, etc., to break regional barriers. For example, in theatre, Mahindra has instituted Mahindra Excellence In Theatre Awards (META) or Aditya Birla Group has come up with Aadyam — an initiative to build a theatrical performance from scratch but such initiatives are far and few. There is Sangeet Natak Akademi or National School of Drama, but we need more support especially in smaller centers for performances from these places to reach out to larger spaces, and to be noticed at a pan-India level.

The immediacy of human performance is unparalleled. We all have experienced the magic of artistes like Teejan Bai, Ratan Thiyam, or Kanhailal when they broke through the regional barriers. An artiste humanises a culture and makes us feel more human.

You mentioned being stuck in the US during the pandemic. How was your lockdown experience?

My lockdown experience was not all that bad. I was in the US but fortunately, my sister Zahera and brother-in-law Humayun live there in Michigan and were my refuge. I had a comfortable stay with them. It was, however, heartbreaking to see the horrific effects of the pandemic unfold in India.

In that sense, I think I was very lucky. I had access to every amenity in the US, which helped me take care of my requirements. I spent time reading books, writing, giving online lectures and interviews, and memorising my favorite poems. Most of those poems I later performed and posted as short videos under the title ‘A Dastango Stranded In America’. I also started open mics on Instagram with titles Lockdown Poetry Open Mic and Lockdown Qissebaazi Open Mic for storytelling. I began a series of satirical videos with a fictional character Kshama Maharaj who was perpetually apologising under the title ‘Pleaj Take Bak Your Offens‘. It was in response to the harassment faced by a stand-up comic Agrima Joshua for a set in one of her gigs. All of this kept me reasonably occupied.

What is the one thing you missed the most in 2020?

The one thing I missed most was performing on stage. That is a loss I have shared with artistes and performers all across the world – the joy of performing before a live audience at a real venue.

How does 2021 look for you, personally and professionally? What’s keeping you busy at the moment?

I think 2021 would certainly fare better than the preceding year. Also, I pray every Indian receives the COVID vaccine. I hope this pandemic will eventually subside and we could return to normalcy. I believe, as time passes, humanity will turn wiser. We need to learn to live in harmony with nature and not exploit it for our greed and comfort.

I wish, at a professional level, to create more theatre, devote more time towards writing and continuing doing meaningful work whether in cinema or on stage. Personally, I am shooting a handful of web series and a couple of films right now which should hit screens towards the end of the year or later in 2022.