On its website, Christie’s highlights some works made of “manatee bone, shell and terra-cotta, layered with symbolically-charged iconography,” and states that “the works speak to the creativity of the Taíno.” 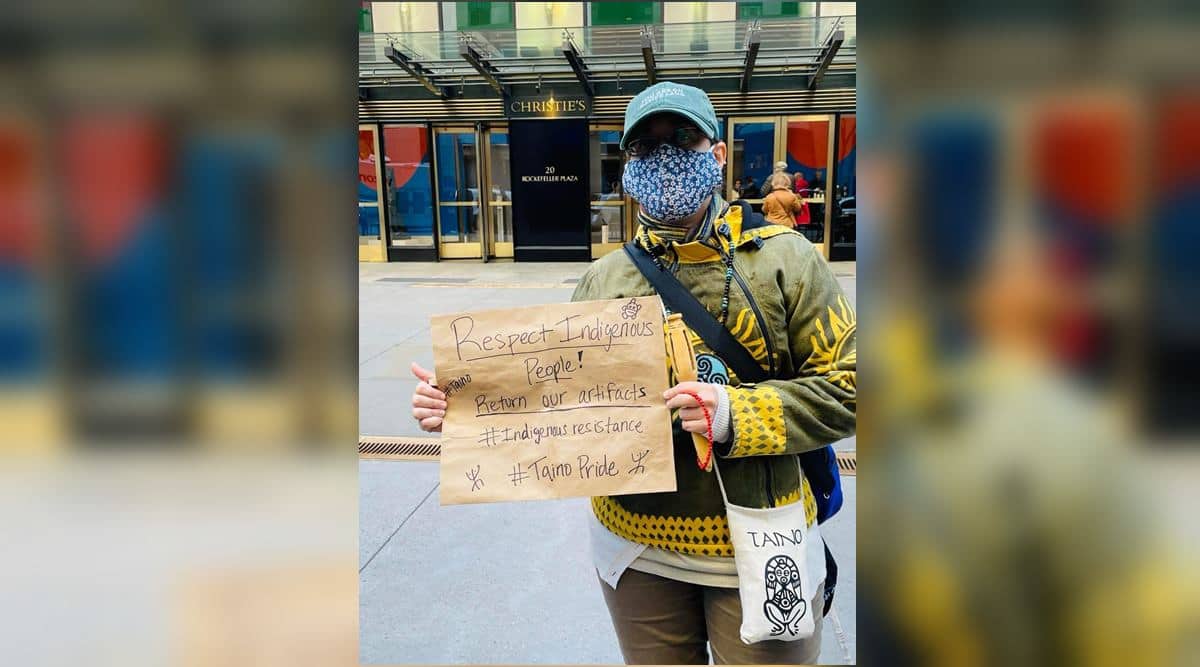 On the sidewalk outside of Christie’s auction house in Manhattan, Ra Ruiz León, who is Taíno, played the mayohuacán wooden slit drum. She had arrived at Christie’s with a sign reading “Respect Indigenous people! Return our artifacts.”

León was one of a small group of people who showed up at a “Bring Back Our Artifacts” ceremony outside of Christie’s at noon Monday, followed by a meetup outside of the French Consulate General.

The two events followed an online petition asking Christie’s to stop the sale of sacred artifacts of the Taíno, an Indigenous people of the Caribbean whose descendants can now be found throughout the Antillean islands. Stephanie Sherman, a member of the Arayeke Yukayek Taíno tribe, created the petition a week ago in response to Christie’s “Pre-Columbian Art & Taíno Masterworks” auction scheduled for Wednesday in Paris, and it had surpassed 30,000 signatures by Tuesday afternoon.

“No matter how much these things go for, there’s no price that has the value for what these items are worth,” Sherman said in a phone interview. “We have so little to ourselves, to our Taíno communities that we long to honor and have these objects back.”

The “Pre-Columbian Art & Taíno Masterworks” auction includes 38 works from the private Fiore Arts Collection of Taíno art, as well as Mayan and Mezcala pieces. On its website, Christie’s highlights some works made of “manatee bone, shell and terra-cotta, layered with symbolically-charged iconography,” and states that “the works speak to the creativity of the Taíno.”

“As custodians of the art that passes through our doors, we recognize we have a duty to carefully research the art and objects we handle and sell,” Christie’s Paris said in a statement. “We devote considerable resources to investigating the provenance of works we offer for sale, and have specific procedures, including the requirement that our sellers provide evidence of ownership.

“In the case of the upcoming sale, these checks have been carried out and we have no reason to believe that the property is from an illicit source or that its sale would be contrary to French law.”

Sherman said she first learned of the auction through a TikTok post that includes a video from a Christie’s website feature on the items, which appears to have since been removed.

In the video, André Delpuech, the director of the Musee de l’Homme, introduces the upcoming auction items. “Unfortunately, for the Taíno, they were completely destroyed by the Spanish conquest,” Delpuech says in the video. “And we can imagine that around 1530 or 1540, no Taíno were living in the Caribbean.”

Stephanie Bailey, the chief, or cacike, of the Arayeke Yukayek tribe, was particularly struck by the implication that the Taíno people were essentially extinct.

“They’re still perpetuating this idea of extinction or annihilation to drive sales, essentially,” Bailey said in a phone interview. “That’s really what we feel that it’s doing, driving sales, because we become more of a valuable asset if we no longer exist.”

In fact, last year, a scientific study in the journal Nature found that, on average, about 14% of people’s ancestry in Puerto Rico could be traced back to the Taíno. That figure was about 4% in Cuba and 6% in the Dominican Republic.

“If they sell the items, of course it’s devastating,” Bailey said. “It’s a thousand percent devastating. However, dialogue can create a space where, in the future, maybe it doesn’t happen that way.”

Even if they can’t ultimately stop the auction, the Arayeke Yukayek people hope for dialogue with Christie’s to provide perspective. In the future, Bailey said, perhaps Christie’s will reach out to the Taíno people first.

After the group started researching Christie’s, Bailey said, they realized that Mexico, too, had expressed concerns regarding two auctions in Paris, including this one, that included Mexican pre-Hispanic items.

On Oct. 22, the Mexican Embassy in France sent a letter of protest to Christie’s Paris and informed France’s Ministry for Europe and Foreign Affairs that it believed such sales encourage transnational crime and create favorable conditions for looting, according to an embassy news release.

At the ceremony Monday, Sanakori Luis Ramos, the behike, or medicine man, for the Arayeke Yukayek people, invoked the ancestors using a zemi, a sculptural object housing the spirit.

“That’s two things that need to be addressed: one is stopping the sale, and two,” Ramos said, “we exist.”