Launched today, Vande Tripura has started with recorded lessons. It would shift to live classes, discussions on different academic topics, educational news and different information relating to the education department and directorate from June 1. 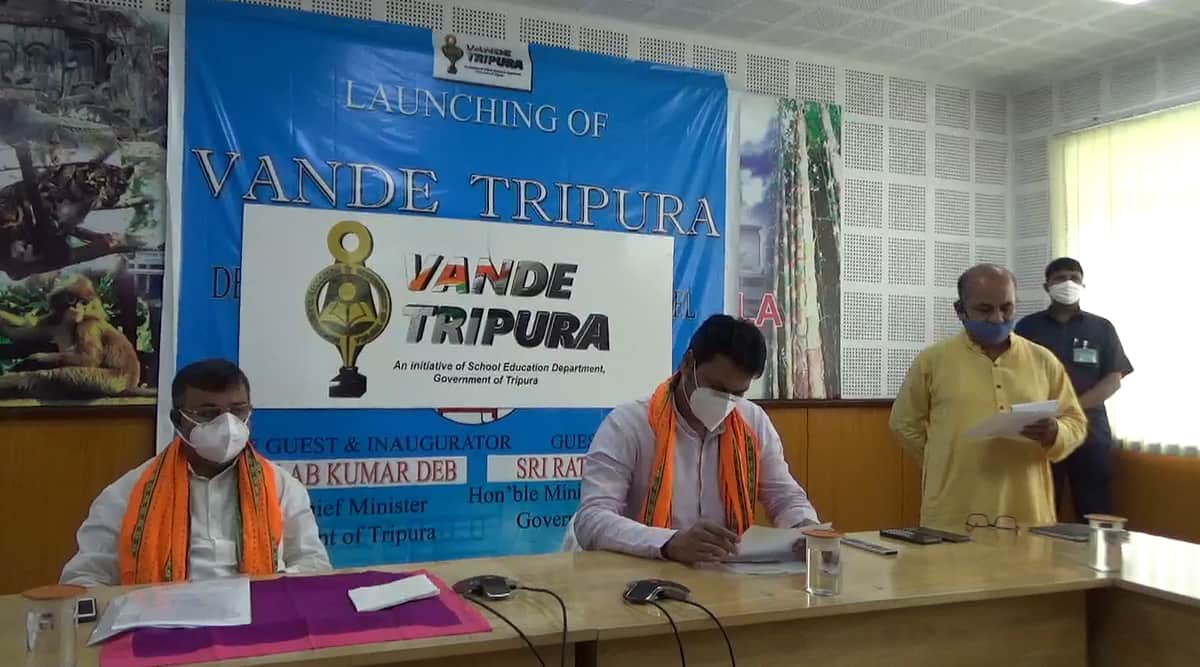 Fourteen months into the pandemic, Tripura Monday launched Vande Tripura, a 24×7 dedicated educational channel to offer lessons on the school syllabus and cover the educational loss incurred in the last 14 months of the pandemic, as schools, colleges and other educational institutions are shut down to break the chain of transmission.

Speaking to reporters in an inaugural event at the state secretariat today, Chief Minister Biplab Kumar Deb said the channel was conceived as the first-ever initiative of its type to enable students in getting their lessons despite the shutdown in educational institutions.

“Education has been a sensitive sector for our government. We have taken no less than 24 steps to developing educational level in 3.5 years to provide quality education to students. Schools are now closed. Students would give exams after one year but many students leave their studies altogether in such delays. The uninterrupted flow of lessons through Vande Tripura would help students combat educational loss and beat inferiority complex from failure due to loss of class in pandemic and becoming dropouts,” Deb said adding the channel would provide benefits to students across the state by offering lessons 24×7.

Education Minister Ratan Lal Nath said his department had achieved high success in developing educational level through a host of innovative schemes like Notun Disha, where reading, writing abilities of students are boosted through compartmentalised levels of teaching. However, the minister claimed the progress was lost due to no school work over the last 14 months.

“We have faced 36 per cent educational loss from the progress we reached from our unique initiatives. In order to cover the educational loss, we have decided to start a dedicated educational channel,” Nath said.

Launched today, Vande Tripura has started with recorded lessons. It would shift to live classes, discussions on different academic topics, educational news and different information relating to the education department and directorate from June 1.

Televised classes were earlier offered through 13 local channels since the onset of the pandemic last year, live classes were streamed through YouTube channel ‘Siksha Bandhu’, SMS and WhatsApp lesson sharing schemes like Ektu Khelo, Ektu Paro were introduced but a survey found 40 per cent students in Tripura didn’t have access to smartphones.

After schools were reopened for a brief period in February this year, the education department conducted a Learning Loss Assessment and found 36 per cent of students slipped from their previous learning level. All academic activities were once again suspended indefinitely from April 9.

Vande Tripura was launched as a 24×7 educational channel, available on GTPL cable network, Srishti-Hathway cable networks of Tripura, JioTV and YouTube, covering an estimated 90 per cent of the target viewers. The government has said it is working to cover the rest 10 per cent.

Tripura has around 4,400 government and government-aided schools across eight districts, including 132 English medium schools, a figure the government claims has risen from merely 8 from 3.5 years back.