Harish Kotian/Rediff.com give us 40 must-know nuggets about the legendary cricketer:

3. Dhoni last played for India in the 2019 World Cup semi-final against New Zealand in July 2019.

4. Dhoni fell for a duck in his debut match for India — an ODI against Bangladesh at Chattogram on December 23, 2004. 6. Chennai Super Kings Captain Dhoni is the most successful wicket-keeper in the IPL with 152 dismissals in 208 games — 113 catches and 39 stumpings.

7. Dhoni wore jersey No 7 during his career. He has a special preference for the number 7 since his birthday falls on July 7. July too is the 7th month. So, the number seven keeps repeating in various forms for Dhoni.

The only other IPL team Dhoni has turned out has been the Rising Pune Supergiants, whom he played for two years from 2015 to 2017 when CSK was banned for two years.

9. Dhoni made the ‘helicopter shot’ a trademark of his batting in limited overs cricket. He was taught the shot by a close friend, Jharkhand cricketer Santosh Lal.

10. Dhoni captained India when the team rose to the No 1 spot in the Test rankings for the first time in 2009.

Dhoni was also the most successful Indian captain with 27 Test wins, eclipsing the legendary Sourav Ganguly’s 21 victories before he was overtaken by Virat Kohli, with 36 wins and 14 losses. 11. In December 2014, he announced his retirement from Test cricket, abruptly in the middle of India’s tour of Australia with Kohli taking over as the skipper.

13. Dhoni led a young Indian team to the inaugural World T20 title in 2007, beating Pakistan in the final in Johannesburg by five runs.

15. Dhoni was recommended as Team India’s skipper by Sachin Tendulkar. Rahul Dravid had stepped down as captain after the 2007 World Cup debacle where India was knocked out in the first round before Dhoni took over as the limited overs captain.

16. Dhoni played 350 ODIs with his highest score being 183 against Sri Lanka, amassing 10,773 runs with 321 catches and 123 stumpings. The swashbuckler scored nine ODI centuries and two of those tons came from batting at No 7.

17. Dhoni is the most successful captain in T20 Internationals. He captained India in 70 T20I matches, winning 41 of them. 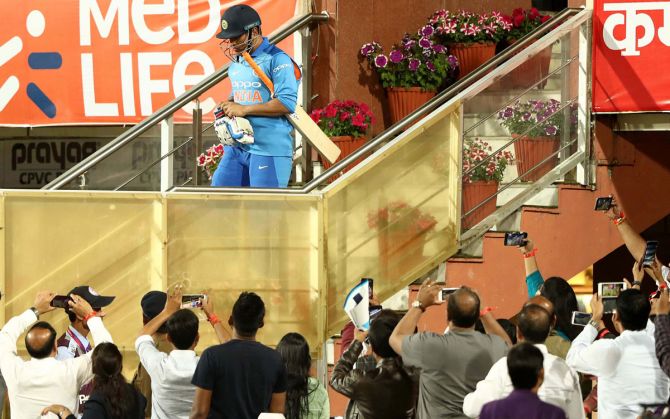 20. Dhoni is in fifth position for most sixes overall in international cricket with a tally of 359 sixes in 538 matches.

21. Dhoni is second in the list for most sixes as captain in international cricket with 211 sixes in 332 games as the skipper, only behind England’s Eoin Morgan.

22. Even after he made his Ranji Trophy debut at the age of 18 in 2000, he was employed as a ticket collector at the Kharagpur railway station in West Bengal between 2001 and 2003.

23. He later joined Air-India. He represented the national airline in the BCCI Corporate Trophy in 2009. Dhoni gave up his Air-India job in 2013.

25. The sight of him taking off his gloves and bowling in the Lord’s Test against England in 2011, even before lunch on Day 2, angered another World Cup-winning captain, the legendary Kapil Dev.

‘Dhoni has made mockery of Test cricket by bowling. This is not acceptable that on the second day of the Test match, you can’t do this,’ Kapil had remarked.

26.Dhoni has one wicket to his name in international cricket — when he bowled Travis Dowlin of the West Indies during the 2009 ICC Champions Trophy.

He handed over the ‘keeping gloves to Dinesh Karthik and got Dowlin bowled off an inside edge in his first over.

27. During India’s tour of England in 2011, Dhoni had got Kevin Pietersen leg before wicket, but KP used DRS and overturned the decision.

During the 2013 Champions Trophy, Dhoni had trapped Mahela Jayawardene leg before, but Mahela too took the review and got the decision overturned.

28. Dhoni was not in favour of the Decision Review System. It was no surprise that he would ace the DRS after India began embracing the technology.

Dubbed as the ‘Dhoni Review System’ by his fans, Mahi gets DRS calls right more often than not.

29. Dhoni holds the record of playing the highest innings by an Indian wicket-keeper in Tests.

In 2013, Dhoni scored a brilliant 224 against Australia in Chennai.

He is also the only Indian wicket-keeper-batsman to score a double-century in Test cricket. 31. Amazingly, Dhoni missed out on making it to the India Under-19 World Cup team back in 2000. Ajay Ratra was selected as the wicket-keeper.

32. Dhoni was the most expensive signing at the first IPL players auction, contracted by the Chennai Super Kings for $1.5 million.

34. His favourite actor is John Abraham. His long hairstyle from his initial years of international cricket were inspired by John.

35. Dhoni’s biopic MS Dhoni: The Untold Story, starring Sushant Singh Rajput in the title role, was released on September 30, 2016. The film went on to become a big hit.

36. Dhoni played badminton and football and was selected to represent district and club in both sports in Jharkhand where his Uttarakhand native parents had settled down.

It wasn’t until he was in Class 10 that Mahi decided to focus on cricket.

37. Dhoni remains an avid soccer fan and is a co-owner — along with Abhishek Bachchan and Vita Dani — of Chennaiyin FC, the football team who participates in the Indian Super League.

38. An honorary lieutenant colonel in the Territorial Army and late Parachute Regiment, Dhoni’s wicket-keeping gloves in the first two games at the 2019 World Cup had a military touch.

The regimental dagger insignia of the Para forces was embossed on his green wicket-keeping gloves.

After objections from the ICC, Dhoni removed the dagger insignia from his ‘keeping gloves for the rest of World Cup 2019.

39. His motorcycle obsession is well-known. The X132 Hellcat is one of the many bikes in Dhoni’s collection.

He also owned a team — the MSD R-N Racing Team India — in the FIM Supersport World Championship which stopped operations from 2104. It was later named Mahi Racing Team India; Telugu movie superstar Nagarjuna is an investor in the team.

40. Dhoni loves dogs and once said he loves going back to his dogs at his Ranchi home after a series because they treat him the same, whether he has won or lost.