‘The way he has performed in the IPL, he has been picked for the T20 World Cup.’ 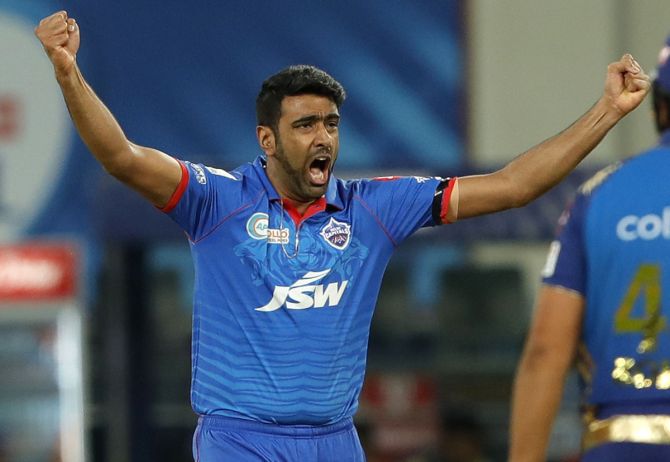 Life has come a full circle for Ravichandran Ashwin.

Once a Test specialist Ashwin is struggling to make it to the playing XI in the ongoing Test series in England, but in a major surprise he was picked in the Indian team for the T20 World Cup, to be held in the UAE next month.

Ashwin, 34, last featured in a T20 International for India four years ago when he played against the West Indies in Kingston in July 2017. He was also left out of ODI teams thereafter as India preferred the wrist spin duo of Yuzvendra Chahal and Kuldeep Yadav.

With off-spinner Washington Sundar ruled out of the T20 World Cup with injury, the selectors preferred to go in with Ashwin’s experience as the pitches in the UAE are expected to aid the spinners.

‘Washington Sundar has been ruled out with injury and Ashwin is an asset for the team,’ Chief Selector Chetan Sharma said on Wednesday.

Like Sundar, Ashwin is capable of bowling at any point in the innings, whether starting off with the new ball or in the middle overs as he does for Delhi Capitals in the IPL.

It was his good showing with the ball in the IPL last year for Delhi Capitals, which was held in the UAE, which tilted the scales in Ashwin’s favour.

Ashwin took 13 wickets in 15 matches, with an economy rate of 7.66 to play an integral role in Delhi Capitals registering their best finish in IPL 2020 as they finished runners up to Mumbai Indians.

‘The way he has performed in the IPL, he has been picked for the T20 World Cup. Ashwin plays regularly in the IPL, where he has been doing very well. In a tournament like the World Cup, you need an off-spinner in your team. The pitches in UAE where half of the IPL will also be held, the wickets will be low and slow, and it will support the spinners. That is why it is important to have an off-spinner in your team,’ Sharma pointed out.

Overall, Ashwin boasts of a very good record in the IPL with 139 wickets in 159 matches at an economy rate of 6.90.

When it comes to T20 Internationals, Ashwin has taken 52 wickets in 46 games at an economy rate of 6.97.

He last featured in the limited overs format for India in 2017, before the young duo of Yuzvendra Chahal and Kuldeep Yadav arrived on the scene and were the preferred bowlers for the next few years.

Ashwin, who has been handed another lifeline in limited overs cricket, says he always believed in himself.

Not one to take things lying down, Ashwin pointed out to the quote on the wall of his trophy cabinet room, which reads, ‘Every tunnel has light at the end of it but only those in the tunnel who believe in the light will live to see it…’

‘I wrote this quote down a million times in my diary before putting this up on the wall! Quotes that we read and admire have more power when we internalise them and apply in life,’ Ashwin tweeted.

‘Happiness and gratitude are the only 2 words that define me now.’