Gautam Gambhir believes current skipper Dinesh Karthik should bat after Eoin Morgan and Andre Russell and also wants Sunil Narine to be be dropped from the top of the order. 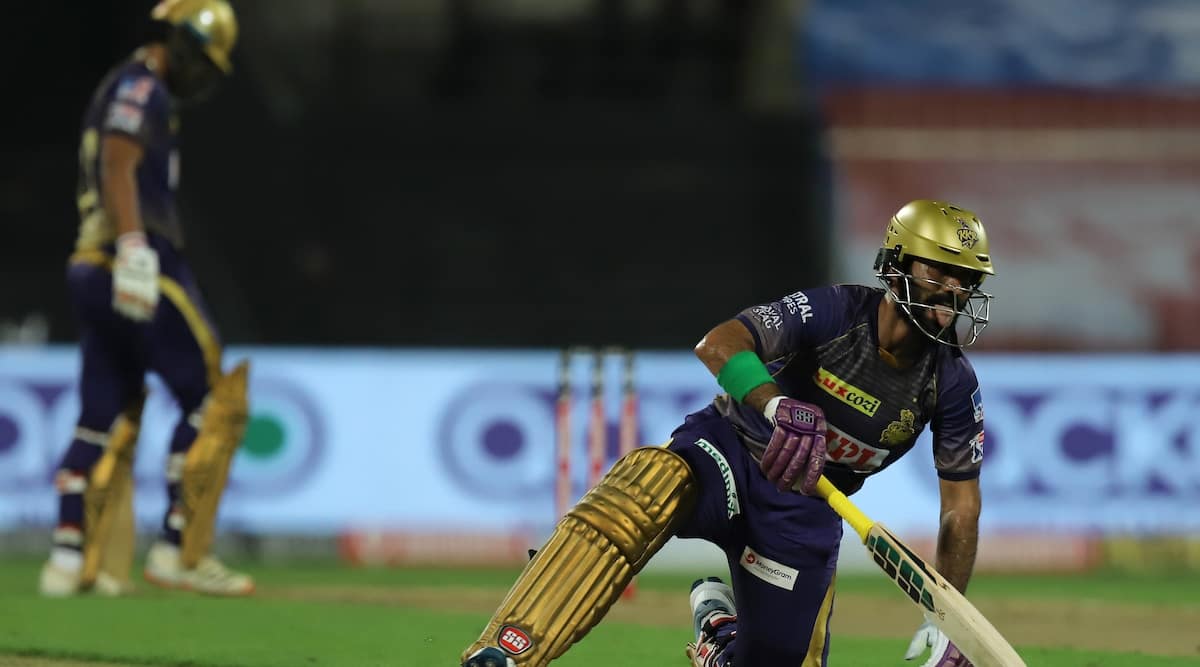 Apart from a 23-ball 30 coming at no 3 against Mumbai Indians, Karthik has failed to produce any significant score despite batting ahead of Morgan so far in the tournament.

The wicket-keeper batsman scored 6 after coming on to bat at no 5 against Delhi Capitals on Saturday even as Morgan (44 off 18) and Rahul Tripathi (36 off 16) raised hopes of a successful chase after batting at no 6 and 8 respectively.

“Rahul Tripathi goes up the order, Dinesh Karthik plays at no 6, not before Morgan and not before Russell as well. Probably Sunil Narine goes to bat at 8 or 9. If Morgan bats no 4 and Russell at 5 and Dinesh Karthik to follow,” Gambhir told ESPNcricinfo.

The former India opener also felt Karthik miscalculated by giving the 19th over to spinner Varun Chakravarthy (1/49) as it yielded 20 runs.

“Your best bowlers need to ball the 18th, 19th and 20th over, unfortunately it didn’t happen. Pat Cummins, Sunil Narine — if a spinner has to bowl. Even Mavi, he did a fabulous job in the previous games and so did Andre Russell. You have to got to give your best bowlers,” he said.

“Yes Varun Chakravarty did bowl well in the first few overs but you cannot expect a young spinner to be bowling the 19th over and that too in Sharjah, probably it was a miscalculation.”

Gambhir said KKR gave away 20-25 runs extra at the Sharjah Cricket Stadium which has shorter boundaries.

“It is never finished till it is finished, that’s what we saw in Sharjah. These are too many runs, probably, 20-25 runs more than what KKR was expecting.

“It was the brilliance of (Anrich) Nortje, just backing himself which actually changed the fortune of the match,” he said referring Nortje’s the 19th over in which he conceded just five runs and took a wicket.

Gambhir also praised Iyer for his 38-ball 88, which was laced with seven fours and six maximum hits.

“We keep talking about how he plays spin but today he showed that he can dominate fast bowlers as well,” he said.

Difficult to bat up the order as we have number of match-winners: Morgan

England’s World Cup-winning captain Eoin Morgan, who is playing the role of a finisher for Kolkata Knight Riders in the ongoing IPL, said it is “difficult” to get a spot higher up the order in a team which boasts of so many “match-winners”.

Coming in to bat at No.6, Morgan hit an 18-ball 44 to conjure up hopes of a successful run-chase before KKR fell short by 18 runs against Delhi Capitals’ total of 228 on Saturday. For England, Morgan has mostly appeared at No.5 and 4.

Andre Russell (13) and skipper Dinesh Karthik (6) batted ahead of him in the match.

Asked if he came out late to bat, Morgan said: “No, I don’t think so. When you look at our batting line-up, we have a number of match-winners, so it’s very difficult to go up the order.

“Particularly when you have a world-class all-rounder in Andre Russell. He is an incredible striker, and when he comes up the order, obviously everybody else has to shift down a little bit,” he reasoned at the post-match online press conference.

Opening the innings, Sunil Narine has not been able to deliver any performance of note so far.

Asked about his place in the batting order, Morgan said: “Sunil is the type of player who can produce match-winning innings. It’s never been a string of scores, over the years, but more about his impact in a game.

“He always takes the positive option, which summarises how we want to play our cricket,” he said.

Morgan said his team played fantastic cricket and there were a lot of positives to consider despite the loss.

“…Delhi bowled well, to a position of strength and looked like winning it. It just wasn’t meant to be,” he said.

“We move on, we played some fantastic cricket throughout so far but Delhi have looked more promising early in the tournament, so to come out and produce a fantastic game but not getting over the line, there are huge positives to take.”

DC then returned to restrict KKR to 210 for eight with Anrich Nortje taking three wickets.

“I don’t think a lot went wrong. To come to Sharjah, you expect a 200-plus in a game and potentially they got a couple of boundaries too many but we were still in the game till the 20th over,” Morgan said.

“T20 can be over-complicated at times. I think when you play at a small ground, you can delve into people’s mistake too much. So, going back and looking at the execution of our yorkers, length balls and bouncers and honest about how to move forward is important.”

Delhi Capitals assistant coach Mohammad Kaif attributed the win to the intensity shown by the batters in the power-play.

“Sharjah has been a high-scoring game. So, we had to come back stronger. We had spoken to our batters to show more intensity in the Power-play,” he said.

“(Prithvi) Shaw played a fantastic knock, we have seen Shaw how dangerous he can be in the Power-play. But we had the intent, we spoke about it right from the first ball and we saw that from the batters.

“First Shaw and Shikhar (Dhawan) started and then Shreyas Iyer played a brilliant knock…overall it was a team performance and the batters had the intention to play their shots”.

The former India batsman praised veteran leg-spinner Amit Mishra for dismissing Shubman Gill before being forced to leave the field due to an arm injury.

“Amit Mishra got injured I think. He would have played a major role. He was a bit different compared to other bowlers, a bit slower in the air…Shubman Gill’s wicket was very important because he is someone who likes to play till the end,” he said.

“Rabada probably had a bad day … but the way Mishra bowled to Gill was great to see.”