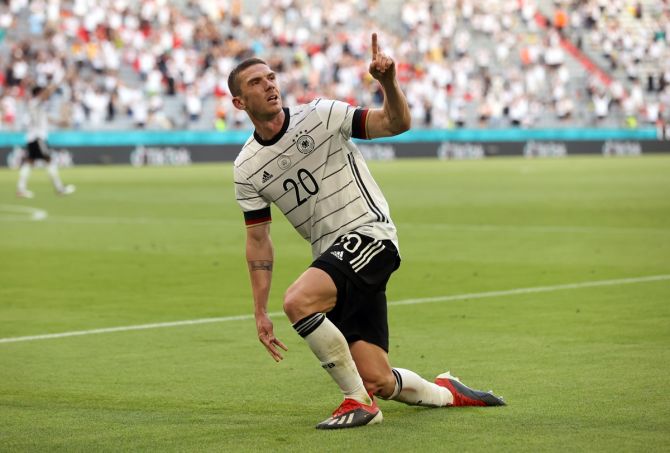 Germany coach Joachim Loew punched the air when Robin Gosens headed in their fourth goal at the far post in their Euro 2020 Group F 4-2 win over Portugal on Saturday, knowing his attacking gamble with his in-form left back had paid off in spades.

Gosens played a sensational game on the biggest stage, intimidating the Portuguese defence with his speed and power down the left wing as he charged through again and again to set up two goals and score another.

“I don’t know if it was the game of a lifetime for him, maybe he still has to play that,” Loew said.

“But an amazing performance from him. He worked very hard and on top of that he was a constant threat up front as well. That is exactly what we needed today.”

The 26-year-old Gosens, who has played his entire professional career outside Germany and unusually has not come out of the country’s youth system, was one of the best in their opening defeat against France but had faced a tighter backline.

Against the Portuguese, he had free rein to display his full set of skills and live up to the title of his autobiography ‘It is worth dreaming’.

The Atalanta defender was crucial to Loew’s plan to attack more often and faster than in their opener, and his constant runs gradually gave forwards Kai Havertz and Serge Gnabry more space to operate inside the box.

Gosens did not take long to ignite, thundering in a flying volley in the fifth minute before his effort was ruled offside, but in an almost identical move he volleyed into the box in the 35th to force Ruben Dias to stab the ball into his own goal.

The defender, a psychology student in his spare time who prefers books to video games, kept up his frenzied runs, remaining a constant source of concern for Portugal’s defence.

He set up Havertz for Germany’s third goal six minutes after the restart, cutting back for his team mate to tap in.

Gosens was the key to Germany turning the game around with three goals from the 35th minute until he headed in to make it 4-1 on the hour and cap a memorable performance.

By the time he scored Germany had had 11 attempts on goal, compared to just two in the entire game against France, and most of those started with Gosens.

The Germans could now seal their spot in the next round when they face Hungary on Wednesday.

Germany’s Loew not surprised by heroics of highly-rated Gosens 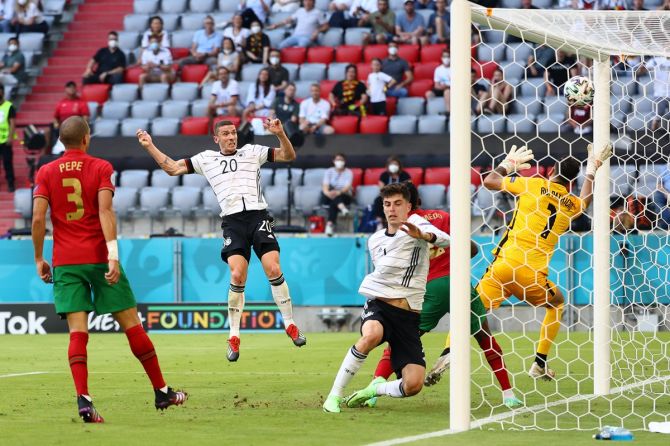 Germany coach Joachim Loew praised Robin Gosens for his dominant display in Saturday’s 4-2 Euro 2020 win over Portugal, saying he knew very early in the left back’s time with the national team that he had all the qualities to succeed.

Atalanta defender Gosens, who has played his professional career outside Germany and has unusually not come out of the country’s youth system, won his first cap in September in a Nations League match against Spain.

The 26-year-old excelled in his ninth game for the country on Saturday, causing problems for the Portugal defence with his blistering pace and power as he set up two goals and scored another in the Group F clash.

“We scouted him a couple of years ago and he managed to adapt real quick and integrate very well into the team,” Loew told a news conference.

Loew said he was particularly impressed with the player’s discipline and communication skills on the pitch.

“As a personality, as a character, we rate him very highly because he’s very open minded, active in communicating. He has a good relationship with all the players,” Loew added.

“He’s really clear in his head. He’s like how he plays on the pitch: very strict, direct, puts in a lot of commitment. That’s the way he fights.”

“These are things that are important to him.”

Germany, who were beaten by world champions France in their opener, will take on Hungary in Munich on Wednesday.