Spain reached the semifinals of the European Championship by beating Switzerland 3-1 in a penalty shootout following a 1-1 draw through extra time. 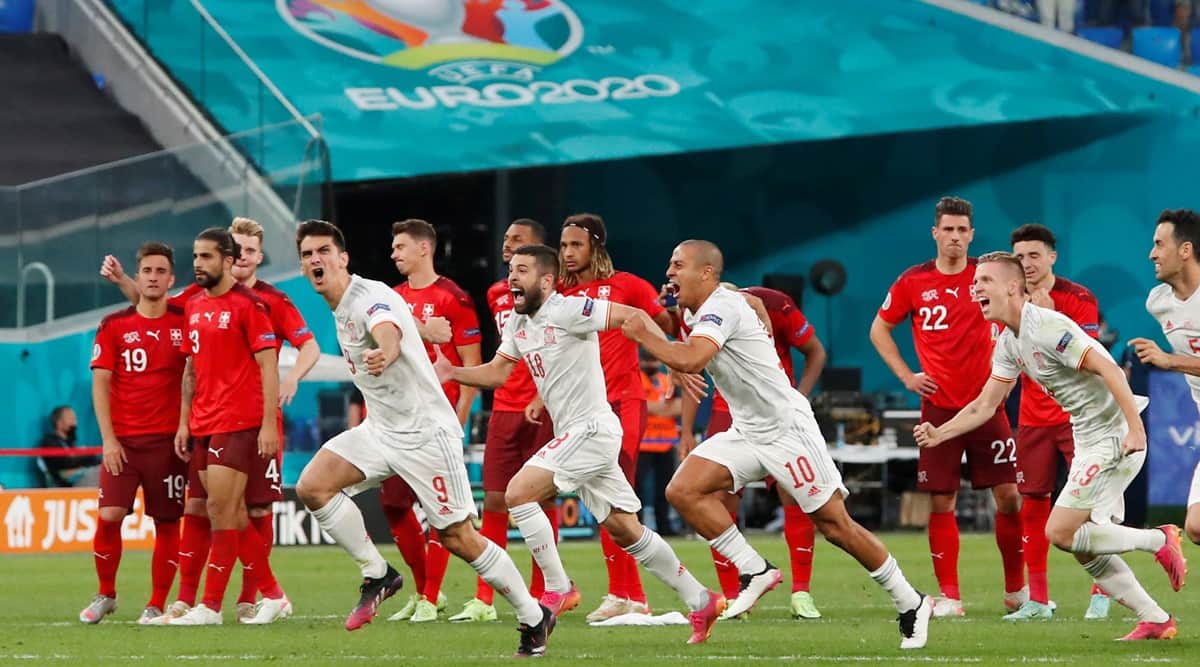 Spain edged ahead of 10-man Switzerland in a chaotic penalty shootout on Saturday evening in the first quarterfinal at the UEFA Euro 2020. With victory at the Gazprom Arena in Saint Petersburg, the three-time European Champions have secured a semi-final spot against Italy. While Switzerland’s goalkeeper Yann Sommer displayed a gallant effort, his performance was not enough to see underdogs Switzerland progress further at the Euros. Here are some highlights from the game:

A highly unfortunate own goal by Swiss midfielder Denis Zakaria got Spain off to a positive start at Saint Petersburg. With 10 own goals this tournament, the count at Euro 2020 has now surpassed the count at every previous edition of the tournament combined! Zakaria’s unlucky touch came in the 8th minute itself, putting Spain ahead of the Swiss side within the first 10 minutes of the game. Through a right corner from Koke, the ball sailed outside the box towards Jordi Alba, who sent a first-time shot on target. Trying to nudge Alba’s strike away with his foot, Zakaria sent the ball racing into the left corner instead, allowing Yann Sommer no chance to keep it out of Switzerland’s net.

Capitalizing on a Spanish defensive error, Xherdan Shaqiri found a sensational equalizer for Switzerland in this dramatic Quarter-final matchup. Miscommunication between Spain’s defenders in the 68th minute saw them lose the ball to Switzerland’s Remo Freuler just inside the 6-yard box. In a stunning Swiss move forward, Freuler crossed the ball towards Captain Shaqiri who sent it into Unai Simon’s left corner with his weaker right foot. A historical moment; Shaqiri now stands as Switzerland’s highest scoring player in the European Championships. He is also among Switzerland’s top ten international strikers with 21 goals for his side.

Minutes after creating an equalizer, Freuler was sent off for a nasty challenge against Gerard Moreno, bringing Switzerland down to 10-men near the 90 minute mark. Freuler was instantly shown a Red Card by English referee Michael Oliver for a dangerous slide into Moreno, who was seen writhing on the ground in pain, 77 minutes into this Quarter-final. Freuler walked towards the sidelines in disbelief; his departure was certainly a major cause for Swiss concern. They would now be facing a relentless Spanish side with just 10 men to support them. However, despite Freuler’s carelessness, Switzerland remained remarkable. They managed to stretch the game to Extra Time and penalties, keeping Spain out of their goal for 30 added minutes, in one of the most incredible defensive plays of the tournament.

When danger is near, Sommer is here:

In a completely Spain-dominated period of Extra Time, Yann Sommer proved beyond brilliant, supported by the efforts of relentless Swiss defenders. But Switzerland had to maintain their line of defence- with over 5 attacks forward in the first 15 minutes, Spain had taken control of Extra Time. The Swiss defenders were holding Spain back well, but the 3 time European Champions nearly made their way through in the 101st minute. This moment was among the closest Spain had gotten; they would have crossed the line had Moreno converted the beautiful delivery he received in the box, but he was blocked off by Sommer in an attempt to tip the ball into Switzerland’s net. With vital saves to deny Jordi Alba, Mikel Oyarzabal, and now Moreno, all in the first half of Extra Time, Sommer had stunned once again. So much so that after being awarded the Man of Match Award at the end of the game, Spain’s goalkeeper Unai Simon responded, “Honestly? I’d have given it to Yann Sommer.”

With no winner at the end of Extra Time, both sides progressed to an exciting penalty shootout: Switzerland’s second at Euro 2020. Switzerland had managed to stay alive with 10 men, and their performance had been incredible. Their line of defence- Akanji, Elvedi, and Schar had proved to be literal wall, and Switzerland had really tested Spain’s offensive. In a nerve-wracking first penalty against the post by Sergio Busquets, Spain seemed to be sliding out of the Championship. However, Switzerland missed 3 of their penalties immediately after; 2 of which were graciously stopped by Unai Simon. Spain, on the other hand, were more on target, converting 3 of their 5 penalties. In a gripping final penalty by Mikel Oyarzabal, Spain emerged victorious with a 3-1 finish at Saint Petersburg.

A fixture that many may have immediately placed in Spain’s favour turned out to be yet another thrilling clash at the Euro 2020. Switzerland, though defeated, will walk out a proud team. They have progressed farther than anyone would have anticipated, and staged a heroic show with their 10-man army. Spain, on the other hand, showcased their professionalism by remaining calm even until the very end. This highly talented side will now progress to an exciting Semi-final clash with Italy, taking them one step closer to securing a 4th European Championship in their names.