The Round of 16 at Euro 2020 indicates we are set for a mesmerising tournament. The knockout-round matches have been intense and full of drama.

Stars have missed penalty kicks, own goals continue to baffle the fans and the defending World (France) and European (Portugal) champions have been knocked out of the competition.

Each Round of 16 game was entertaining. Laxmi Negi/Rediff.com picks the games to remember:

Wales came into the tie against Denmark on the back of a great showing in the group phase and were the pundit’s pick to advance to the next round.

The opening exchanges heavily favoured the Welsh and with an in-form Gareth Bale leading the surge, came close on multiple occasions to breaking the deadlock.

The moment of genius arrived at the half-hour mark when Danish striker Kasper Dolberg latched on to a through ball from Mikkel Damsgaard and unleashed a superb strike from outside the penalty area that curled past the outstretched Welsh ‘keeper and into the far corner to open the scoring.

Dolberg would later double his tally in a performance which would earn him the Star of the Match award and register one of Denmark’s highest winning margins in Euros history. After a perfect start to the group phase with three consecutive wins, Italy were the firm favourites as they lined up against Austria in the UEFA Euro 2020 Round of 16 match in Wembley.

The Austrians defended bravely against the spirited Italians and thwarted wave after wave of attacks and forced the tie into extra-time.

With the tie seemingly headed for penalties, Roberto Mancini brought on Federico Chiesa, a player that the Italian media had been fawning over in the build-up to the tie.

The game-changing moment arrived in the 95th minute when Leonardo Spinazzola’s cross across the penalty area was expertly brought down by Chiesa and hammered into goal from a tight angle.

Minutes later, Matteo Pessina doubled Italy’s lead and though Austria pulled one back late in extra-time, the Italians held on for a famous victory. 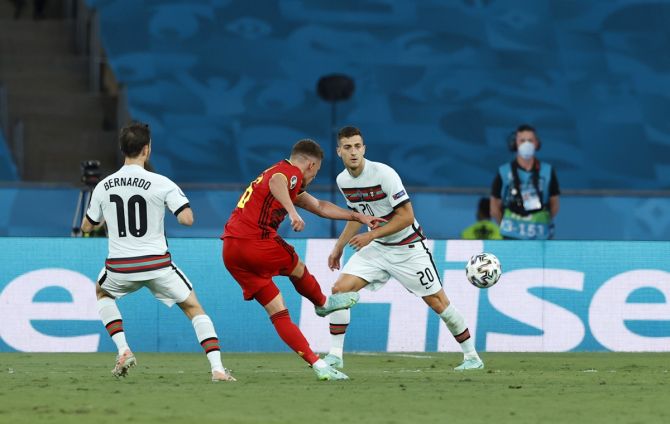 It was the battle of the giants as Belgium took on defending champions Portugal in their Round of 16 encounter.

For the most of the tie, the holders were the ones doing most of the attacking before a moment of individual brilliance decided the tie and sent Cristiano Ronaldo and co crashing out of the tournament.

With the match evenly poised and half-time looming, Thorgan Hazard received the ball at the edge of the penalty area and with two sublime touches, he unleashed a powerful shot that dipped and swerved wickedly before crashing into the far corner of the goal.

Morata delivers when needed most A lot has been written about the current plight of the Spanish team and their recent goal drought, none more so than misfiring striker Alvaro Morata.

Against Croatia in their Round of 16 tie, Spain got off to a horrid start following a goal-keeping error early on, but managed to rally to a 3-1 lead.

Croatia responded with a fairy-tale comeback, grabbing two late goals — the second arriving in stoppage time — to force the tie into extra-time.

With Spain seemingly on the verge of collapse, up stepped Morata to decide the tie once and for all in a moment that confirmed his pedigree as a world-class striker.

As Rodri whipped in a cross from the right wing, Morata took one touch to bring it under control before volleying it into the roof of the net to make it 4-3 and orchestrate a famous Spanish victory. Anything less than lifting the Euro 2020 trophy would have been considered a failure for this current French side.

No one would have predicted that Les Blues would bow out in the Round of 16 — and to a highly unfancied Switzerland outfit for that matter.

After conceding early on, France pulled themselves back to 3-1 with goals from Karim Benzema and Paul Pogba.

Taking a leaf out of Croatia;s book, Switzerland pulled themselves back level with two late goals to send the match into extra-time and eventually to the lottery of the penalties.

After both teams had scored four a-piece from the spot, Kylian Mbappe stepped up to keep France in the tie, only to have his effort saved by Yann Sommer on the line to send the World Champions crashing out of the tournament.

One of the greatest rivalries in international football took centre-stage in the final ties of the Euro 2020 Round of 16 when England took on Germany.

For the most part of the proceedings, England had the lion’s share of the opportunities, coming close to breaking the deadlock on multiple occasions.

As both sets of defenders stood firm and the tie headed towards extra-time, English winger Raheem Sterling opened the scoring with a move that he began and emphatically ended.

After releasing Luke Shaw on the left wing, Sterling made a timely run into the box to meet the resultant cross and finish from close range to send the English fans into raptures.