With Ravi Shastri's tenure coming to an end after the T20 World Cup next month, the BCCI is set to approach Anil Kumble for the role of Team India head coach again. 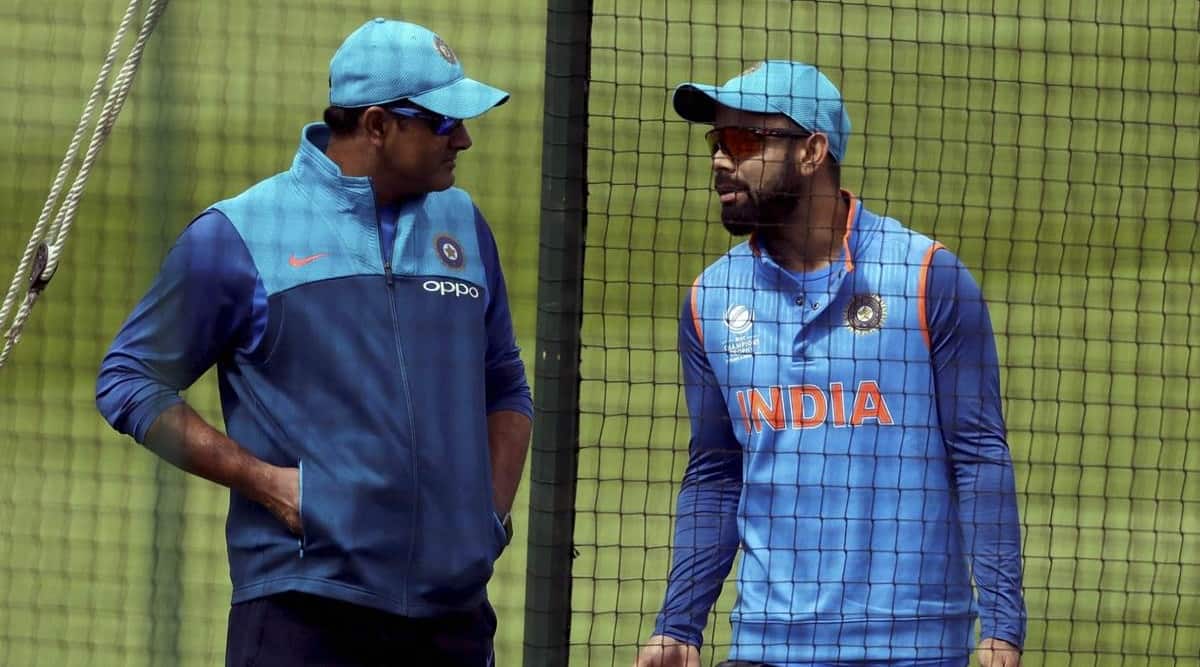 The odds are stacking up against Team India captain Virat Kohli.

With the tenures of Ravi Shastri, bowling coach Bharat Arun and fielding coach R Sridhar coming to an end after the World T20 starting next month, the BCCI is set to approach Anil Kumble to take on the role of head coach once again, The Indian Express has learnt.

Kumble, the former captain and legendary leg-spinner, was head coach of the team before he decided to step down in 2017 after reports emerged of serious differences with Kohli.

On Thursday, a week after the BCCI named former skipper MS Dhoni as a mentor for the World T20 in UAE, Kohli announced that he would step down as India’s T20 captain, paving the way for the captaincy to be split across formats.

Four years ago, soon after Kumble’s exit, Kohli had prevailed upon the BCCI, governed then by a committee led by former CAG Vinod Rai, to get Shastri as the replacement. But now, with a new regime at the helm after the implementation of a Supreme Court-mandated panel’s recommendations, it is learnt that ways to bring Kumble back are being explored.

With Kohli stepping down as T20 captain soon, the BCCI is convinced that the team requires a new coach. In its press release Thursday after Kohli’s decision, BCCI secretary Jay Shah had stated that the board has a clear roadmap for Team India.

It is believed that BCCI president Sourav Ganguly had wanted Kumble to continue in 2017, despite Kohli’s reservations, when he was a member of the BCCI’s Cricket Improvement Committee (CIC).

With Kumble as coach — he was appointed in June 2016 — India reached the final of the 2017 ICC Champions Trophy, which they lost to Pakistan. He is currently in the UAE as head coach and director of cricket operations for the IPL franchise Punjab Kings.

Before deciding to approach Kumble, the BCCI is learnt to have contacted former Sri Lanka captain and current Mumbai Indians coach Mahela Jayawardene with the offer.

However, Jayawardene, who has guided Mumbai Indians to multiple IPL titles, is said to be interested in coaching the Sri Lankan team, and the IPL franchise. An India coach cannot take up any other cricketing assignment as the new BCCI constitution doesn’t allow any individual to hold two posts at the same time.

If Kumble agrees to come on board, he will also have to give up his IPL assignments — he is also the head of the International Cricket Council’s cricket committee.

When Kumble was first appointed head coach in 2016, his combination with Kohli was expected to cover all bases for Indian cricket. The captain’s instinctiveness was to complement the coach’s meticulous planning. But after the early bonhomie, cracks started appearing. It was said that Kumble’s emphasis on planning didn’t go well with the captain who wanted his players to “express themselves”.

In his resignation letter, Kumble expressed surprise at being told that Kohli had reservations about his “style”. “Professionalism, discipline, commitment, honesty, complementary skills and diverse views are the key traits I bring to the table. These need to be valued for the partnership to be effective. I see the Coach’s role akin to ‘holding a mirror’ to drive self-improvement in the team’s interest,” he wrote.

On Kumble’s appointment, Kohli had tweeted: “Heartiest welcome to @anilkumble1074 [Anil Kumble] Sir. Look forward to your tenure with us. Great things in store for Indian Cricket with you.”

After Kumble’s resignation, the post disappeared from Kohli’s timeline.