Australian fast bowler Josh Hazlewood once fretted that he might be too predictable to be a successful T20 bowler but said his approach had gone “the opposite way” after working with Chennai Super Kings coach Stephen Fleming and bowling consultant Eric Simons. 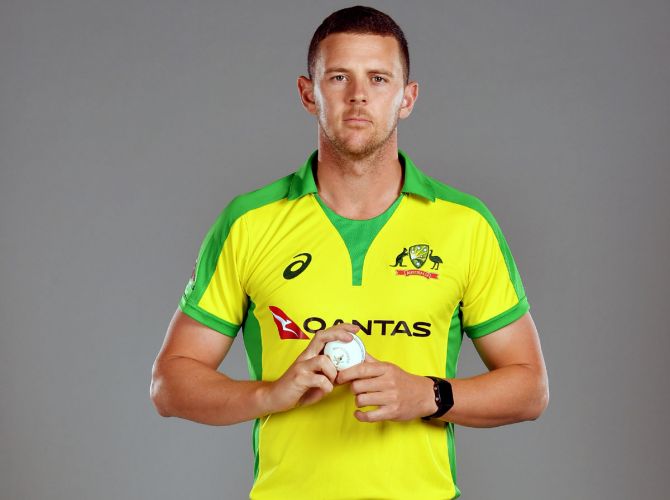 Australia paceman Josh Hazlewood has found white ball form with a red ball mindset, capturing wickets with the line-and-length bowling he has employed to great success in Test cricket.

Hazlewood took 2-19 from his four overs to help Australia claim a five-wicket win over South Africa in their Twenty20 World Cup opener on Saturday, continuing his sparkling form from the Indian Premier League.

Having often been ignored by selectors for the shorter formats, Hazlewood has underlined his value with the kind of bowling that has made him a fixture in Australia’s Test attack.

Hazlewood once fretted that he might be too predictable to be a successful T20 bowler but said his approach had gone “the opposite way” after working with Chennai Super Kings coach Stephen Fleming and bowling consultant Eric Simons.

“(We were) just chatting about batters probably expecting that, expecting you to change,” Hazlewood, who racked up 15 dot balls and conceded only two boundaries against South Africa, told reporters.

“If you get hit for four or six, they’re probably expecting something different next ball.

“So, I think the wickets are a little different here as well, but it’s about … just keep doing the same thing.

“Make them hit fours and sixes off your good deliveries — just above the stumps, a hard length. That seemed to be working for the last few weeks in IPL and again (against South Africa).”

Australia, bidding for their first global T20 title, head to Dubai for their next clash against Sri Lanka on Thursday and will take with them concerns over their batting after struggling to reel in the Proteas’ meagre total of 118 in Abu Dhabi.

“I think that’s sort of how you win your first game of a tournament,” he said.

“There’s a few nerves flying around obviously on both sides and that’s how it looked.

“It’s certainly better to be one win than one loss. It feels like you’re in the tournament.”