Steve Smith scored Australia’s first century of the series to drive the hosts to 338 all out but India stood firm with 96 for two to leave the third Test in the balance at the end of the second day in Sydney on Friday.

India spinner Ravindra Jadeja took 4-62 and brilliantly ran out Smith for 131 to end Australia’s first innings before tea and the home pace attack managed only to oust India’s openers before the close of play.

Josh Hazlewood celebrated his 30th birthday by ending Rohit Sharma’s first innings of the series caught and bowled for 26 before Pat Cummins had Shubman Gill caught at gully just after the young opener had reached his maiden half-century. 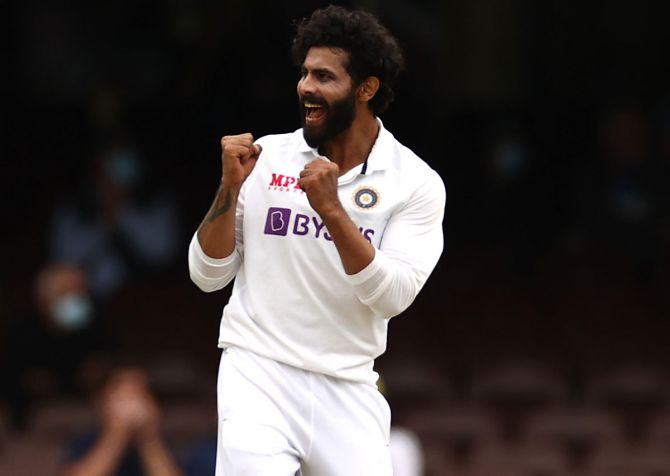 The obdurate Cheteshwar Pujara, unbeaten on nine, and his captain Ajinkya Rahane, who had scored five not out, will resume India’s innings on day three as the tourists look to break the 1-1 deadlock in the four-match series.

That task looked a lot easier while Smith was struggling for runs but after scoring only 10 in his first four innings of the series, Australia’s best batsman rediscovered his form at his home ground.

Overcast conditions contributed to a muted atmosphere at a Sydney Cricket Ground populated by a socially distanced crowd of 9,052 all obliged to wear face masks.

They were all on their feet in the early afternoon, however, as they joined a delighted Smith in celebrating his 27th Test century and first since the 2019 Ashes in England. The former captain, who hit 16 fours in an all but chance-less knock, had a nervous spell on 99 before turning the ball off his hips to square leg for three runs.

“It’s always nice playing at the SCG,” said Smith. “It’s my home and I love playing here, it was nice to put a score on the board and help Australia.”

The frailties in the remainder of the Australian batting were plain to see, however, after Jadeja had broken Smith’s promising 100-run partnership for the third wicket with Marnus Labuschagne, who was caught in the slips for 91.

Resuming on 166-2, Australia would have been looking to bat through much of the day for a tally well in excess of 400 but they lost their last seven wickets for the addition of only 132 runs, most of them scored by Smith.

Matthew Wade departed for 13 after a rash charge down the wicket and skipper Tim Paine, all-rounder Cameron Green, Pat Cummins and Nathan Lyon barely bothered the scorer before following him.

Fittingly, Jadeja had the last word, showcasing his fielding skills with a direct hit from square leg to run out a diving Smith and close the Australian innings.

“Our approach tomorrow should be simple — to spend time in the middle,” Jadeja said. “Everybody needs to contribute and bat with responsibility if we are to put up a good total.”