Hit the straps with a crushing win over Afghanistan, giving them a toehold in the semifinal race. 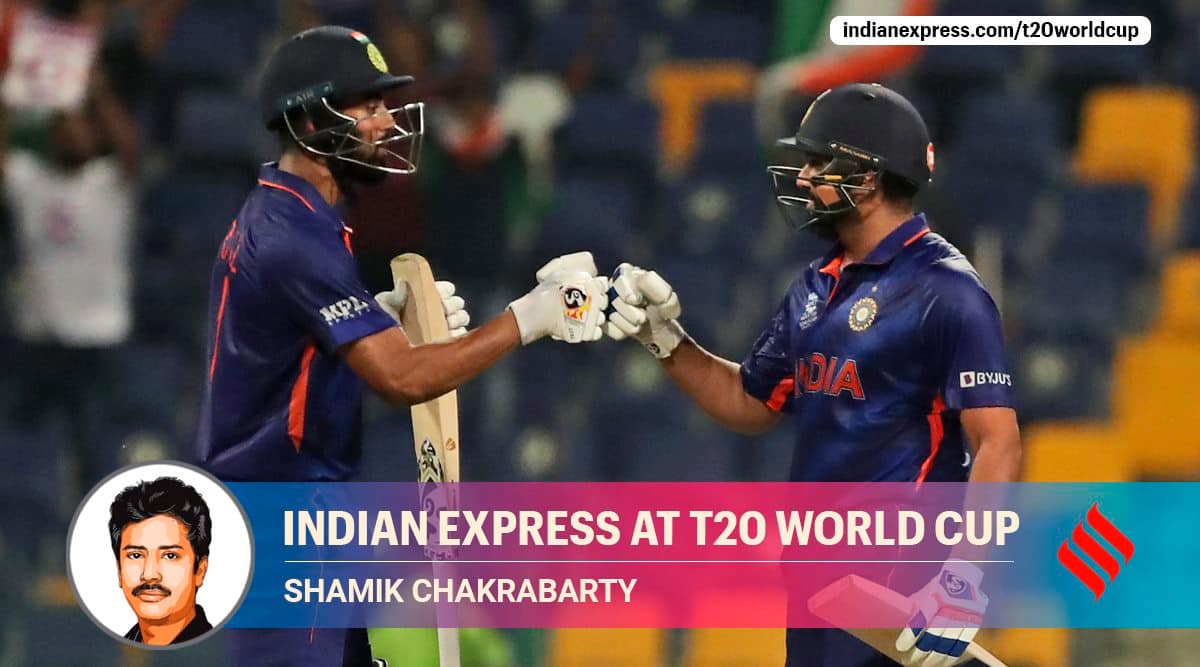 It was the night India shed caginess and embraced boldness. Uncertainty had made them fearful in the first two games, especially against New Zealand. But twice beaten, Virat Kohli’s team rediscovered their aggression against Afghanistan, thrashing them by 66 runs and keeping their remote hopes of reaching the semifinal alive.

The openers, KL Rahul and Rohit Sharma, set the tempo with a 140-run stand, and once India put 210/2 on the board, the game was done and dusted. The landslide margin of the victory lifted their net run-rate to +0.07 as well as confidence.

That said, Afghanistan were far from inspirational—they played utterly poor cricket. It didn’t matter for India. Their opponent seemed incidental, notwithstanding T20 cricket’s unpredictability. Team India was locked in a tussle with its low morale. Back against the wall and with nothing to lose, the batsmen finally blossomed.

It began with a scare or two, though. A cloud of apprehension had accompanied India from Dubai to Abu Dhabi. First, the optimism of Scotland pulling off an upset over New Zealand faded away, with the minnows falling short by 16 runs. Then, as the team started their pre-match warm-up, Jasprit Bumrah bowled off a shorter run-up, his knee heavily strapped. The pitch wore a greenish look, a fresh 22 yards that wasn’t used during the IPL. As is his wont, Kohli lost the toss.

But the change of venue worked wonders. Abu Dhabi is an open stadium with Sydney Hill type grass banks on both sides. The stadium’s openness and the nature of the surface aid fast bowlers upfront. But Afghanistan started with spin from both ends, and Rohit and Rahul quickly flicked the top gear.

Maybe, India’s crawl against New Zealand spinners was on Mohammed Nabi’s mind. But that was an aberration from a set of batsmen that usually plays spin well. The Afghanistan captain had misread the conditions and the mood of India’s opening duo.

Through a premeditated sweep and a lofted drive over mid-on from Rohit, India went gung-ho. Rahul sent Sharafuddin Ashraf six rows back over long-on soon after.

The only time the two openers shed their attacking intent was between five and 8.3 overs, going through that phase without a boundary. In fact, Rohit played five dot balls on the spin, but there was never a chance for a repeat of the New Zealand game. Once Rashid Khan twisted his ankle and searched for the right length, India didn’t have much to bother about.

Almost without breaking a sweat, Rohit and Rahul got to their respective half-centuries, punishing Naveen-ul-Haq in the process. Then, Rohit turned his attention towards Rashid with back-to-back sixes. His dismissal felt like an anticlimax but the team management made the wise call by sending Rishabh Pant at No. 3 to neuter Rashid in his final spell.

The Indian cricket team’s fan following across the globe is something the players treasure. The expats in this neck of the woods create a home-like feel. Throughout the match, some fans ran along the grass banks on the west side, carrying the national flag. Pant entertained them by sinking down on his back knee and hitting a one-handed six over long-off. From Rohan Kanhai’s falling sweep to Pant’s falling lofted drive, cricket’s evolution has been steady.

Hardik Pandya at No. 4 made sense as well. If the team’s belief in Pandya’s finishing ability is unshakeable, this was his best opportunity to regain his confidence, which he did by scoring 35 not out off 13 balls. Aided by a dropped catch by Najibullah Zadran, a dolly on 14, Pandya rediscovered his power-hitting range. Pant remained unbeaten on 27 off 13 balls to shore up his own shattered morale. If by a quirk of fate India reach the semifinals, it would be imperative to have every player in the right mental space.

As for bowling, India eventually gave Ravichandran Ashwin a game, at the expense of Varun Chakravarthy, and the senior off-spinner showed why quality trumps mystery at the international level.

Sample his dismissal of Gulbadin Naib—at the last moment Ashwin flicked the ball with his middle finger, second-guessing that the batsman would sweep. Naib was outdone by the skid and outfoxed by a master spinner.

Zadran was castled by a delivery that came out of Ashwin’s hand like a traditional off-break, but it drifted and went with the angle after pitching. On his return to the T20I fold after more than four years, Ashwin claimed 2/14 from four overs.

There were other bright sparks too. Both Bumrah and Mohammed Shami took wickets in the Powerplay. Catching in dewy conditions was exemplary. A Ravindra Jadeja catch, disallowed by the third umpire as it seemed to have touched the ground, deserved plaudits for effort and agility. Also, much to the team’s relief, Pandya recovered from a blow on his forearm while batting to bowl two overs.