Kolkata Knight Riders got off to the worst possible start chasing 177 set by the Lucknow Super Giants after Baba Indrajith was dismissed for a duck by Mohsin Khan — setting the scene for a bowling masterclass that would see the IPL debutants run out winners by a massive margin of 75 runs at Pune on Saturday.

The game finished midway through the 14th over as KKR spectacularly collapsed to 101 all out. Remarkably, every single Lucknow bowler picked up at least one wicket on the night.

As the dust settled on the pitch and the congratulatory hugs and high-fives began circulating through the Lucknow dugout, paceman Avesh Khan stood out in everyone’s praise for his spectacular contribution with the ball. 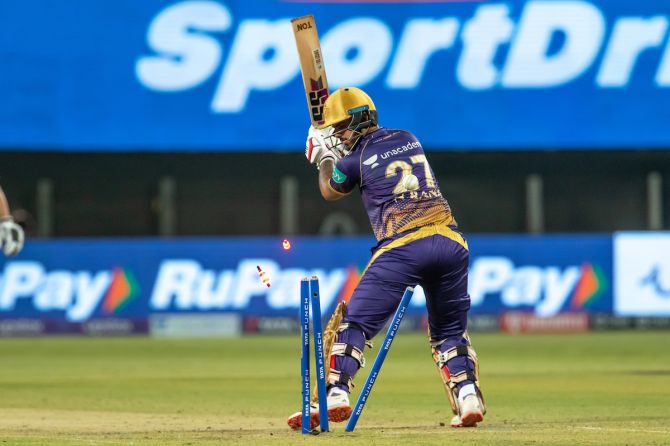 With final figures of 3-19 including a wicket-maiden, Avesh had the all-important scalp of the in-form Andre Russell, who was causing all kinds of problems for Lucknow during his hard-hitting spree at the crease.

Avesh got in on the action by dismissing Nitish Rana in the 7th over with an inch-perfect yorker. Rana tried to make space inside the crease, but failed to connect with the ball as it knocked out the stumps for a stunning dismissal. The over would also turn out to be the second wicket-maiden of the match for Lucknow, following a stunning opening over by Mohsin Khan.

Avesh’s biggest impact was in the 12th over when he claimed Andre Russell’s wicket with a length delivery that was miscued to third man and caught by Jason Holder.

Any hopes of a KKR comeback were immediately quashed as the new man in, Anukul Roy, was dismissed two balls later for a duck, caught behind by Quinton de Kock trying to glance the ball away to fine leg but only managing to edge it. 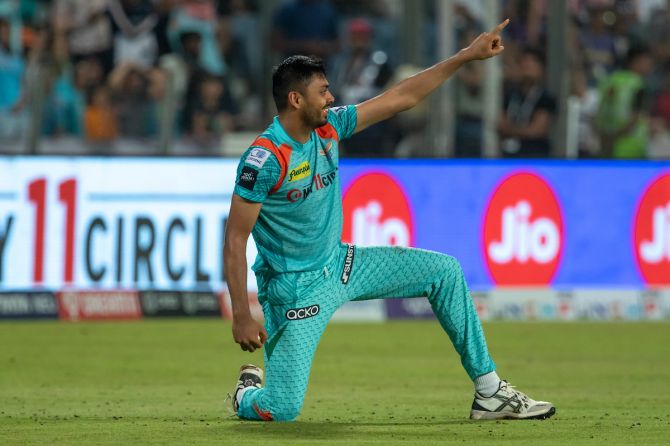 ‘The attempt was to get Dre Russ out as he was going well. My aim was going with the hard lengths even if that goes for six. His wicket was the best of the three as he was on top,’ Avesh said in the post match interview as he collected the Player of the Match Award.

Lucknow’s win takes it deservingly to the top of the IPL 2022 standings. With the entire team firing on all cylinders and with a current run of four matches unbeaten, they are shaping up to be worthy contenders for the top prize.