Guardiola’s players are sweeping all before them this season, having also reached the final of the English League Cup, the quarterfinals of the Champions League and forged a 14-point lead in the Premier League. 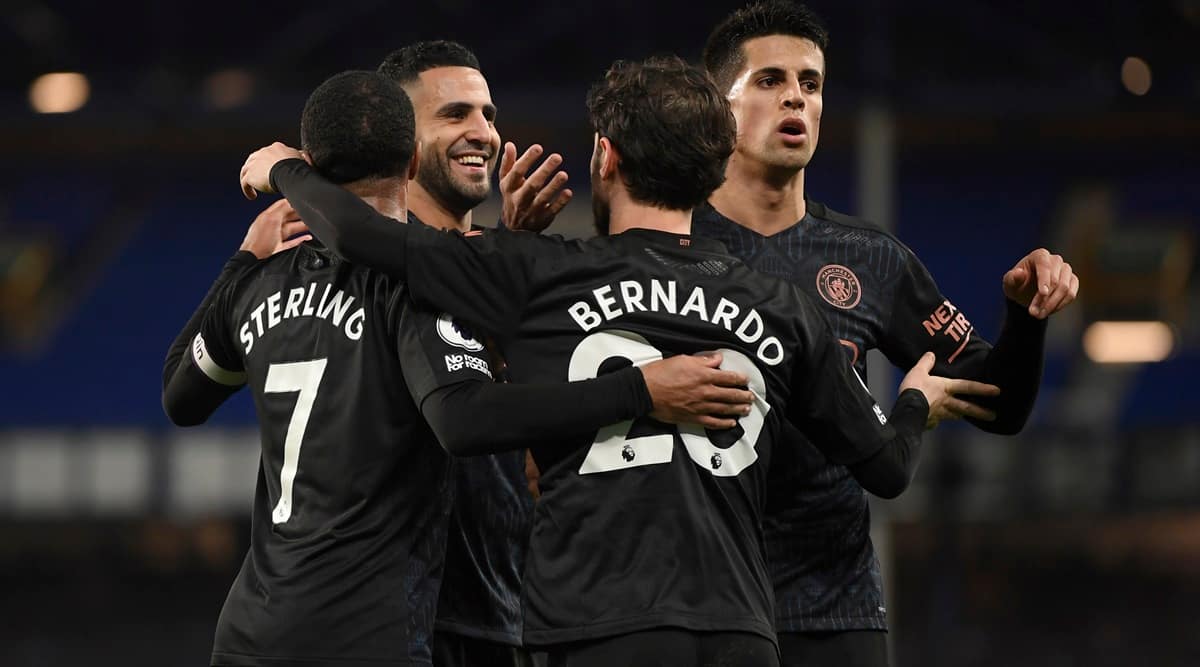 With an unprecedented quadruple still a possibility for Manchester City, the pressure on Pep Guardiola is intensifying heading into the final two months of the season.

So, as his superstar players head off around the world on international duty, the City manager is ready to switch off.

“This week,” Guardiola said, “I promise I will not think about football. I will not watch games.”

Few would begrudge him the break, with an intense 34-match, four-month stretch — featuring games every three or four days — concluding with a 2-0 win over Everton in the FA Cup quarterfinals on Saturday.

The goals came late — through Ilkay Gundogan in the 84th minute and Kevin De Bruyne in the 90th — but there was a certain inevitability about them inside an empty Goodison Park.

“We wanted to keep them uncomfortable … we defended well, didn’t concede space. We played the game we wanted to play,” Everton manager Carlo Ancelotti said. “But they are the best team in the world.”

Indeed, Guardiola’s players are sweeping all before them this season, having also reached the final of the English League Cup, the quarterfinals of the Champions League and forged a 14-point lead in the Premier League.

Extra time loomed when Gundogan stooped to head the ball into an empty net after a shot from marauding City defender Aymeric Laporte was tipped onto the bar by goalkeeper João Virgínia.

It was the Germany midfielder’s 12th goal in all competitions in 2021, more than any other player in the Premier League.

De Bruyne, who started the match on the bench, ensured City’s progress to the last four with a goal in the 90th minute, running onto a pass by Rodri and switching the ball to his left foot before scoring with a composed finish.

“There will be a few more games like this, I think,” Gundogan said, “but we have to be ready for them. If you want to win trophies and fight for everything, you have to find a way to win.”

City also won the FA Cup in 2019 as part of a domestic treble under Guardiola. The team is trying to go one better this season, though the Champions League has so far proved elusive for City despite the club’s heavy spending under its Abu Dhabi ownership over the past decade.

Guardiola refuses to entertain any questions about the possible quadruple, which has never been achieved in English soccer. All he wants now is for his players to return to the club fit and healthy after the upcoming international break.

“Hopefully the (coronavirus) bubbles are controlled,” Guardiola said. “I’m looking forward to everyone coming back safe.”

Southampton is the other team through to the FA Cup semifinals after beating second-tier Bournemouth 3-0 earlier Saturday.

The other quarterfinal games are on Sunday and both are all-Premier League matchups: Leicester vs. Manchester United and Chelsea vs. Sheffield United.

Southampton made it to the last four for the second time in four seasons, with Nathan Redmond scoring twice and setting up another goal against Bournemouth.

Redmond slipped in Moussa Djenepo for the opener in the 37th then scored a superb solo goal in first-half stoppage time, dribbling into the area and skirting a challenge before firing a shot into the top corner.

Redmond added the third in the 59th with a precise, angled shot into the bottom corner after an effort from outside the area by Stuart Armstrong came back off the post.

Southampton also reached the semifinals in 2018, losing to Chelsea.

In the only Premier League match of the day, Brighton beat Newcastle 3-0 to move six points clear of the bottom three and leave its opponent locked in a relegation fight.

Leandro Trossard and Danny Welbeck scored similar goals — right-footed curlers from the edge of the area, after coming in from the right — and Neal Maupay added the third goal for Brighton, which found a cutting edge the team has lacked in recent weeks.

Newcastle is two points and a place above third-to-last Fulham, having played one game less.