When Chelsea meet Arsenal in the Europa League final on the shores of the Caspian Sea on Wednesday, it might be coach Maurizio Sarri's last match in charge despite what appears as a solid first year at Stamford Bridge. 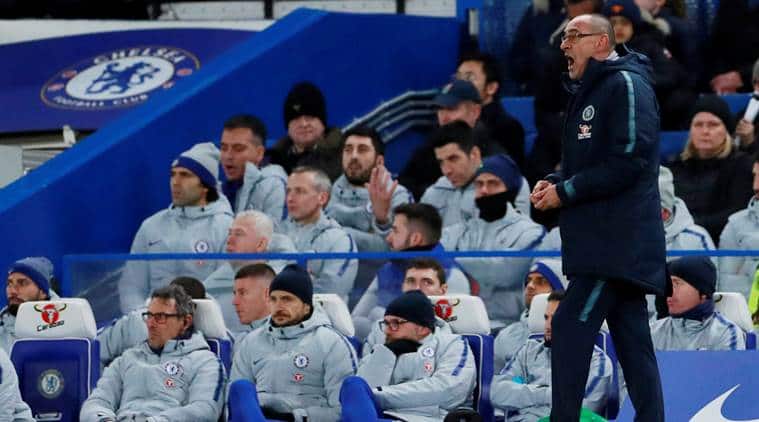 When Chelsea meet Arsenal in the Europa League final on the shores of the Caspian Sea on Wednesday, it might be coach Maurizio Sarri’s last match in charge despite what appears as a solid first year at Stamford Bridge.

Under the Italian, Chelsea have qualified for the Champions League next season and reached the final of the domestic League Cup before losing in a penalty shootout against Manchester City.

By contrast Arsenal, under Unai Emery in his first season in London, missed out on the four Champions League spots on offer in the Premier League after a late slump in form.

The Gunners must now beat their city rivals in the Olympic Stadium in Azerbaijan’s capital Baku to squeeze into Europe’s premier competition. Yet it is Sarri who seems to be on the shakier ground, not least because of Chelsea’s record of hiring and firing managers – a dozen, including interim coaches, have come and gone since Russian oligarch Roman Abramovich bought the club in 2003.

Arsenal, by contrast, gave former manager Arsene Wenger 22 years in the job before he made way for Emery.

Furthermore, Chelsea’s third-place in the Premier league table might look impressive, but they finished 25 points behind runners-up Liverpool and were thankful that Tottenham Hotspur and Manchester United, along with Arsenal, stumbled badly.

Some Chelsea fans have been very direct in their criticisms of Sarri’s tactics and have made it clear to the club’s hierarchy who they would prefer in the dugout next season by chanting the name of former midfield hero Frank Lampard.

In his first season as a coach, Lampard has steered Derby County to Monday’s second-tier playoff final against Aston Villa for a place in the Premier League.

‘ARE THEY HAPPY WITH ME?’

Sarri, who has been linked with the vacant coach’s position at Juventus, acknowledged the uncertainty surrounding his future in the run-up to the trip to Baku.

“I have to speak with my club after the final. I want to know if they are happy with me or not,” he said.

Sarri appeared to be on the ropes in February when Chelsea were thrashed 6-0 in the Premier League by Manchester City, not long after a 4-0 drubbing by Bournemouth.

But Chelsea stabilised while Arsenal went on a miserable run of form late in the season, costing them the chance of leap-frogging bitter rivals Spurs into fourth place.

Arsenal’s strike force of Pierre-Emerick Aubameyang and Alexandre Lacazette will fancy their chances against Chelsea’s often shaky defence, which will be missing the injured Toni Rudiger.

Defensive midfielder N’Golo Kante is expected to be fit for selection after a hamstring injury but England’s Ruben Loftus-Cheek and Callum Hudson-Odoi are out of Chelsea contention with Achilles tendon injuries.

The Gunners’ back line proved to be their own weak link during their domestic season, giving Eden Hazard a chance to shine on what many Chelsea fans fear will be his last appearance for the Blues. He is expected to move to Real Madrid in the summer.

Arsenal will also suffer from the absence of Henrikh Mkhitaryan who decided not to travel to Baku because of concerns over his safety in Azerbaijan, which has a long-running and sometimes bloody dispute with Mkhitaryan’s native Armenia.

The absence of Mkhitaryan has added to the resentment among Arsenal fans at the prospect of a 5,000-mile round trip to the Caucasus for a match against another London team. UEFA has defended the decision, saying it chose the venue two years ago.

The final gives Emery a chance to win the Europa League for a fourth time having led Sevilla to glory in the competition for three years in a row between 2014 and 2016. By contrast, Sarri has yet to win a major title as a coach.