Wins the elusive major trophy for Argentina after years of being hounded by criticism of picking silverware only for his club, Barcelona At the final whistle in the smothering emptiness of the Maracana, Brazil’s theatre of dreams, Lionel Messi became a child again. Messi was, at last, a champion in Argentina’s blue and white, beating Brazil 1-0 at their home, a goal that lobbed from his colleague Angel di Maria’s left-boot ending what seemed like an eternal wait.

He slumped onto the dew-hewn grass, covered his face with his sweaty arms and wept till his joyous teammates lifted him and tossed him in the air. Moments later, he wrapped his sweaty arms around Neymar, Brazil’s tragic-hero, and consoled him, before, to the deafening applause of the smattering crowd, mostly support staff, football officials and dignitaries, he held the 30-inch tall trophy like his own child, and kissed it, and then kissed it again, in a blissful trance, his eyes closed but tears trickling down his cheeks. 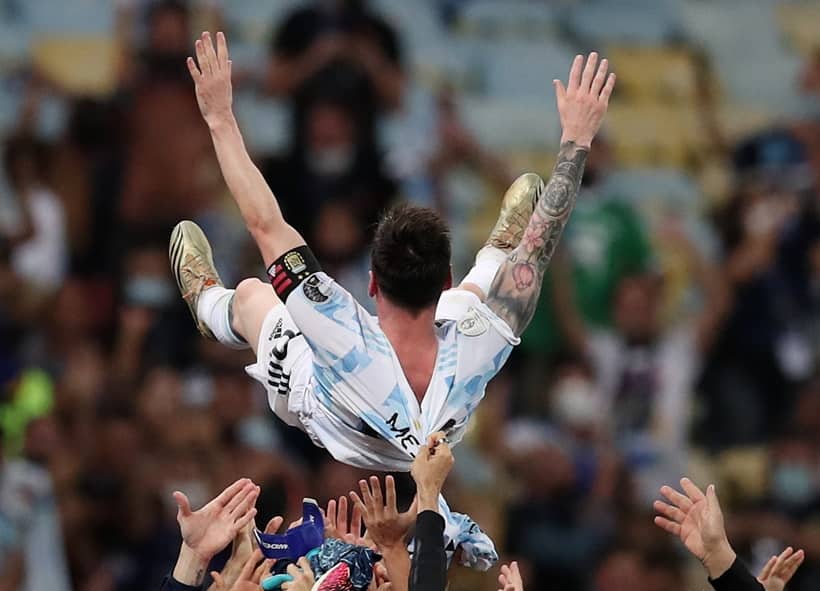 He briefly escaped into the dressing room, then resurfaced before rolling with his teammates on the weeping grass-blades of Maracana. Messi began to weep again, and teary-eyed, video-called his family, and broke into a fit of tears again, like a child in front on his own children. Often blamed for not showing enough emotions on the pitch, Messi chose the most spontaneous of them, the tears, to express the immeasurable joy of winning the first major tournament triumph for the country, one that has cruelly teased and tricked him in the past. The ghosts of all the lost finals would never be exorcised, not least that of the 2014 final at this very arena, the regrets will linger forever, but the joy of winning something that has always dodged, something that seemed not destined, would make the moment sweeter for him. It could prolong his international career, steeling his resolve for the World Cup quest in 15 months too. Another heartbreak in a final, he would not have endured, and as in 2015 and 2016, could have considered folding up the blue and white stripes of Argentina eternally.

His obsession for winning a trophy for his country—without a major one for the last 28 years—has been never as palpable as it has been in recent times. Just before this tournament, he told a journalist friend of his: “I will swap all my golden boots for winning a trophy for my country.” On the field, he has been an uncommonly agitated and infuriated person, a different person at times, picking arguments with referees and opponents, expressing more joy and anger than ever before, admonishing and shouting at his teammates with a newfound zeal.

The five goals and four assists—of winning the tournament single-handedly value—were not so much a testament of his ascendant evolution, as it was a vindication of his unyielding will to conquer the one milestone he has not. He was, after the shootout win over Columbia, even cruel, when instead of sympathising with his former Barcelona teammate Yerry Mina, who fluffed the penalty, he clapped mockingly at him and shouted something like “keep on celebrating.”

There have been times when he has looked tired and off-colour, like he was in the final where he fluffed a fairly regulation goal-scoring chance by his gold-standards, but he masked the vulnerabilities with his defiance and grit and showed the world that his attachment with the Argentina jersey is stronger than ever before and deeper than they thought. So much that the missing title was not just a blot on his career, but a hole in his heart, a crack in his psyche.

It was also the night Messi appropriated to the grand Argentinean concept of Pibe—literally means an urchin kid, but in the parlance of the game, a hyper-talented footballer brought up in the streets blessed with an equal amount of skills and street-smarts, symbolised by Diego Maradona, who they called El Pibe de Oro (The Golden Boy). Messi, with his game largely shaped at the La Masia academy, and his upbringing rather privileged, wasn’t ever one. So he was never the Pibe.

Messi’s apparent detachment towards Argentina was a myth, a mistranslation of his persona. Only that he has not always demonstrated his love for Argentina outwardly. Be it for Barcelona or Argentina, he has always been a quiet player, not always the most demonstrative one. He is not much of a social-media animal, interviews are cliches on a loop, he carefully protects the person he is, making him an enigma of sorts. Sometimes, when he has spoken the truth, it was misinterpreted. He was asked in a national television: “Do you feel you owe the World Cup to the Argentinian people?” Messi replied: “We owe it to ourselves.” A scandal erupted.

Whereas it was perceived as a measure of maturity in Europe, it was misconstrued as aloofness in Argentina, whose archetypal heroes, be it their greatest footballing hero Diego Maradona or the father of the nation José de San Martín, are loud and audacious, bruising and buccaneering. It’s not that Messi did not feel sad after each of Argentina’s exits, but he had a different way of expressing disappointment, in an inhibited manner, as they do over in Catalonia, where he had spent most of his 34 years.

Much was made of Messi’s Mona Lisa-like cryptic face when he received the golden boot after the World Cup final defeat to Germany, but only a few knew he disposed the trophy with a staff member and told him, “do whatever you want to do with it,” before plunging to the floor and weeping for hours. Some of his managers could only empathise with him and the burden he carried every time to the ground. “The World Cup is like a revolver to his head,” former manager, Jorge Sampaoli, once summed up the burden of being Messi.

That revolver would be stuck to his head till his last game for Argentina, but his desire to achieve as much as he could for his country before his powers fully wane has liberated him from the pressures of the outside world. Messi is selfish as he has never been, selfish in his cause for his country, and in the process, winning the first of the long-elusive title, appropriating to the pibe concept late in his career and being a child again.