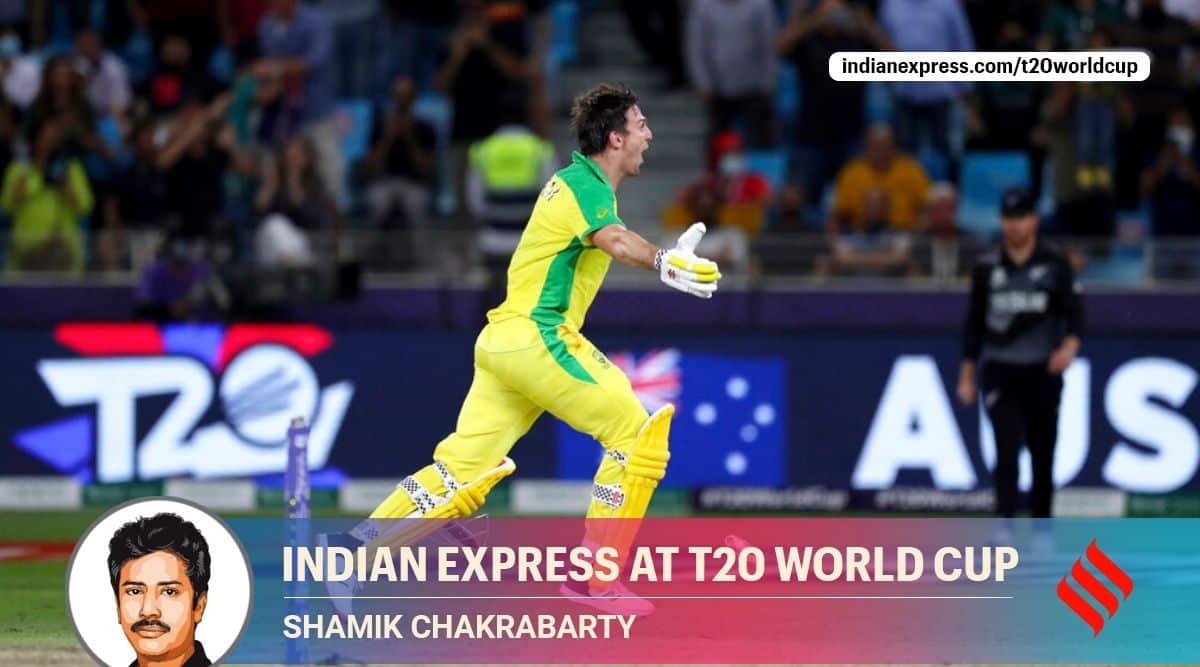 THREE BAGGY Green holders in a household, two of them World Cup winners, is an impressive legacy. Geoff Marsh won the World Cup in 1987. Sunday night in Dubai, his younger son Mitchell went one better.

He had won the 50-over World Cup in 2015 before starring in Australia’s maiden T20 World Cup triumph.

The phone was buzzing at Geoff’s residence in Perth. Mitchell’s call came a little late after he was done with collecting the Man of the Match award and celebrating with the team. The proud father knows what it feels like to win a World Cup. At the other end of the line, Mitchell sounded relaxed. “He was a lot more relaxed when I spoke to him.”

For Geoff though, it was never about his son’s individual performance. Years in top-level cricket has taught him that winning in cricket is almost always down to team effort. For Mitchell, however, the T20 World Cup triumph offered an escape to stardom, from being the “third-best” batsman in his family, after his father and elder brother Shaun.

From being a prodigy in 2010, when he led the Australian colts to the U-19 World Cup title,to slipping under the radar at senior level, Mitchell’s career has had ups and downs aplenty. “This kid is the next superstar of Australian cricket, no doubt,” the late Dean Jones had said about Mitchell more than a decade ago.

But the youngster flattered to deceive. Yes, injuries played a part, but for a long while, Mitchell struggled to reach the next level. The ‘late bloomer’ moniker used for him carried a hint of sarcasm. The T20 World Cup was his coming-of age tournament. Geoff agreed. “Yeah,he has got himself fit now. I think injuries have plagued him through his career. They are gone now at the moment, touch wood. He keeps working on his fitness. The important thing for him would be to keep performing.

That’s the biggest thing at this level and this is what his cricket requires,” he told The Indian Express.

Marsh Sr had nailed it.

Mitchell will have to keep performing not to be a flash-in-the-pan type. Just 32 Tests over seven years at the highest level, and 63 ODIs and 36 T20Is since his debut in white-ball cricket 10 years ago, is not befitting a cricketer of his pedigree and talent. At 30 years of age, he is no longer a young prodigy. But of late, Mitchell has been working hard on the mental aspects of the game, aiming to bring more steel to his cricket. The final against New Zealand provided a sneak peek. Geoff gave a lowdown.


“He is big, he is strong. He hits the ball hard. He has got a pretty good technique. He has all-round abilities. And he is mentally strong. One of the things he has really worked hard during the West Indies tour and the Bangladesh tour was to perform when things were really tough, working hard through those tough times. I know one of his goals is to play well under pressure.”

Being the son of Geoff and younger brother of Shaun has had its advantages.One gets a feelof an international dressing om from an early age. As a kid, Mitchell saw his heroes at close quarters. But it has its downsides also. Comparisons start quickly and at the senior level, faults can get magnified.

Can Mitchell build on his T20 World Cup performance,or it would again be one step forward,two steps back?

Geoff knows his younger son has the game to succeed in Test cricket also. He isn’t a one-dimensional white-ball cricketer. But like a hard taskmaster, he reiterated the consistency factor. “I think he has shown at the Test level tha the can play. You know, Test cricket is tough. It’s a really hard game. But whatever the format, you have to keep performing and that’s applicable to everybody.” 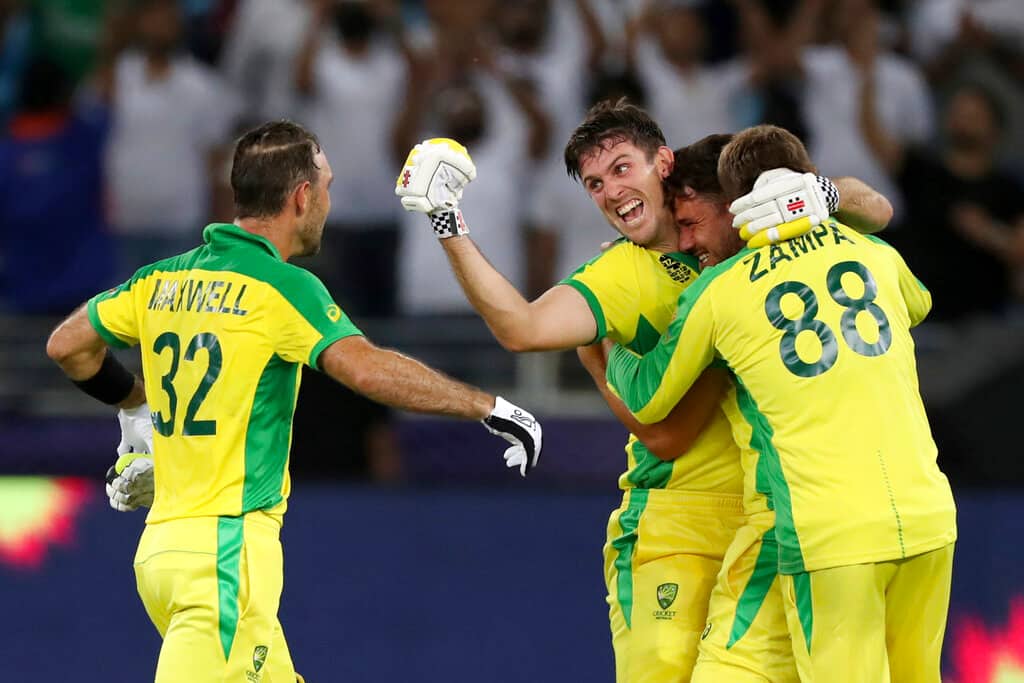 Make no mistake. Geoff is immensely proud of what his son has achieved. But he credited the World Cup glory to team effort. “Yeah, we spoke after the game. He was pretty happy. The whole team was very,very happy. You work so hard to achieve your goal. At the end of the day, it was a great team performance and David Warner was terrific both in the semifinal and the final. There were a lot of really good performances, not just Mitchell’s.”

The Australian players had a shoey drinking beer from a shoe– after the game. ‘Under The Southern Cross’ they sang. Far afield in Perth, Geoff’s Baggy Green team spirit came to the fore. “We are obviously very pleased (for Mitchell), more pleased for the whole squad.

It was for the first time in a while that the Aussie team got together; coaching staff and all the best players were together. They worked really hard for six weeks. They knew itwas going to be really tough. Really pleasing to see them come through with flying colours in the end.”  This tournament was a redemption song for Warner as well and Geoff is equally pleased for the senior opener, who let his bat do the talking and turned a corner.

“David Warner came into this tournament on the back of a disappointing IPL. And he fought, he kept going, he didn’t change his game plan; he was out there to hit the ball and he has been a champion for a long, long time. He stood up to be counted at this World Cup. Just fantastic.”

Success in the family

Geoff knows a thing or two about winning the World Cup. In 1987, he was one half of the Boon-Marsh opening combo of the Australian team led by Allan Border that defied the odds to win the World Cup.

He was the coach when Australia went on a winning spree to capture the 1999 World Cup. Aaron Finch’s Australia, too, were written off before this T20 World Cup. Then, the hammering against England happened and Australia’s hopes slid further. 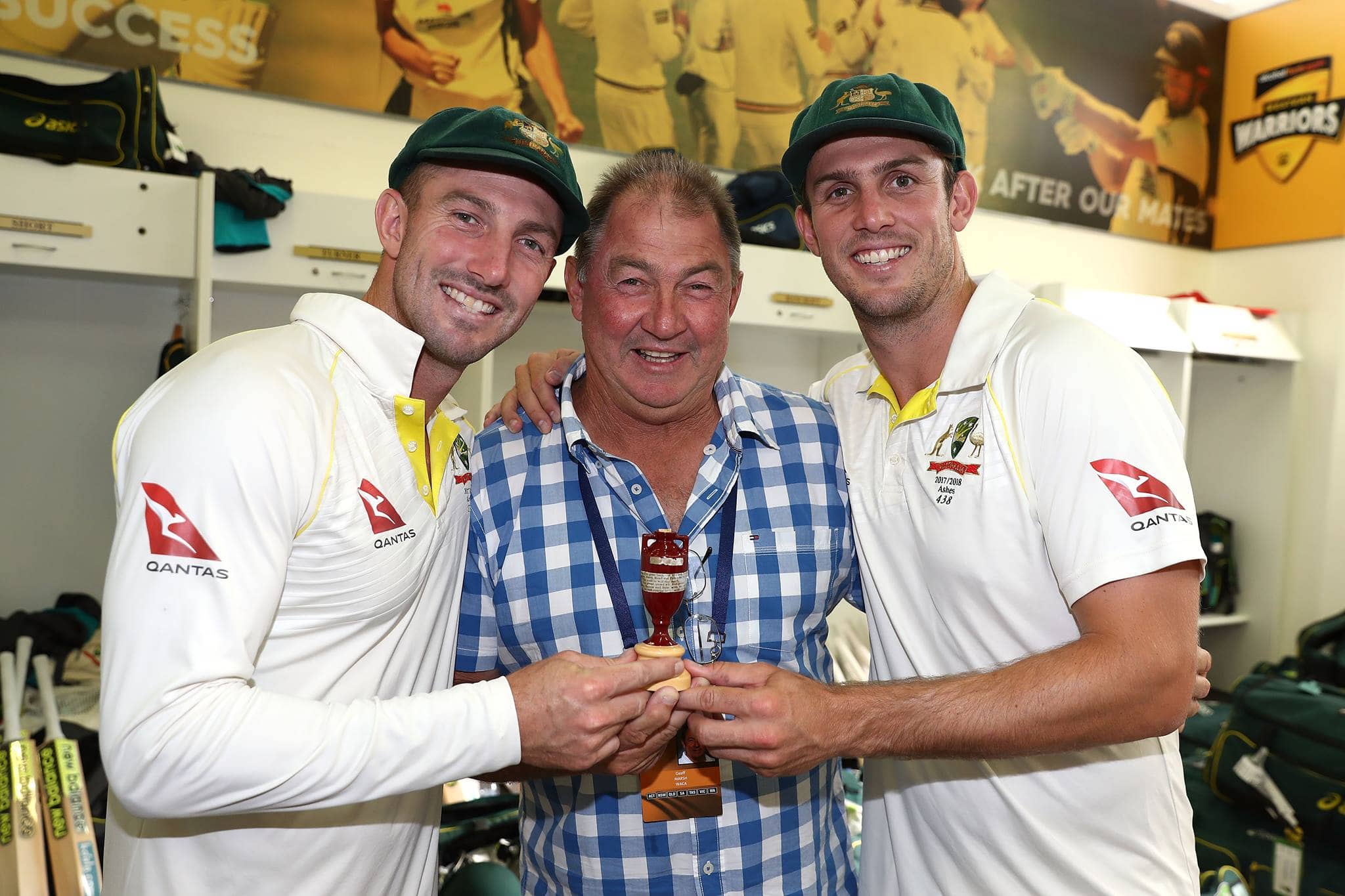 The turnaround story had Mitchell at No.3 in the batting order, providing the right balance to the team. Geoff offered a bigger picture. “ (Adam) Zampa was magnificent right through the whole tournament. (Josh) Hazlewood was fantastic. (Mitchell) Starc was great. When you have such a fantastic spin bowler like Ashton Agar not getting into the side, then that’s a very strong squad.I think it was about Australia getting their best side on the park.”

It was the monkey-off-the-back moment for Justin Langer also,the head coach who reportedly was facing a player revolt only about three months ago. The man whose methods were allegedly called stroppy had been showered with praise after the victory on Sunday night. Langer, in fact, always had the backing of those who played with him and know him at close quarters. Geoff is a big fan.

“I think Justin Langer is a very good coach. He is a very good man and his ability to take his team to the World Cup victory just shows who he is. He has done a magnificent job and you heard the players speak very, very highly yesterday. I think the whole squad worked hard with Justin to be good on the field and off the field.

They became united and enjoyed their cricket. “Mitchell’s homecoming would trigger another round of celebration, but that’s not happening immediately. “We don’t see him immediately (laughs). “He goes back to quarantine and then he will be busy playing cricket. It’s very hard for theplayers to get back home; they are playing all their cricket. About getting to meeting him, we are waiting on that,” said Geoff.

That’s the life of a modern-day cricketer. But when Mitchell returns home, he would carry his newly-acquired stardom. The “third-best” batsman in the family now has two World Cups.