‘Fact of the day. It takes Stefanos Tsitsipas twice as long to go the bathroom as it takes Jeff Bezos to fly into space.’ 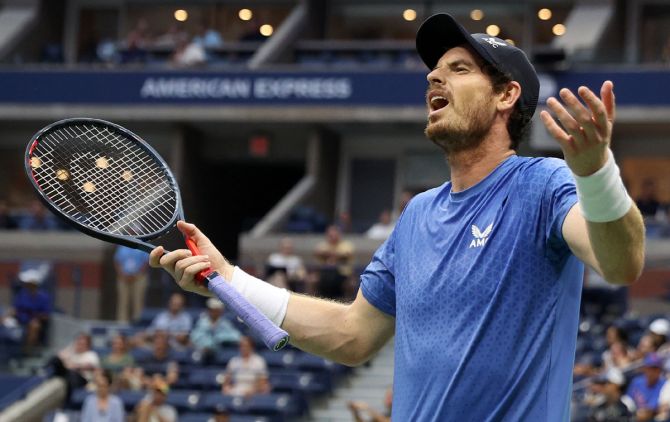 Andy Murray launched a fresh rocket at his US Open conqueror Stefanos Tsitsipas on Tuesday, griping that the Greek player took longer on bathroom breaks than it took billionaire Jeff Bezos to reach outer space.

The Briton was furious when Tsitsipas took a break that ran close to eight minutes during their five-set first-round clash on Monday, which he felt disrupted his game and swayed the outcome.

The 2012 Flushing Meadows champion was still stewing a day later.

“Fact of the day. It takes Stefanos Tsitsipas twice as long to go the bathroom as it takes Jeff Bezos to fly into space. Interesting,” the 34-year-old Scot tweeted on Tuesday.

Tsitsipas, 23, had pointed out after the match that he had not broken any rules, as there are no time limits on bathroom breaks. “If there’s something that he has to tell me, we should speak the two of us to kind of understand what went wrong,” he said.

His incensed younger brother, Petros, responded to Murray’s broadside on Twitter: “Never expected this kind of behaviour, from a supposedly tennis legend!”

Murray had called his opponent’s bathroom breaks “nonsense”, saying that he had been warned by his team about such tactics before the match.

During the fifth set, where Murray was broken in the first game, the former world number one could be heard shouting “it is cheating” towards his box.

World number three Tsitsipas took the seven minute-plus break before the decisive fifth set. He also took another bathroom break before the third set and a medical timeout in the run-up to the fourth.

He will take on world number 44 Adrian Mannarino of France in the second round on Wednesday.

The bathroom breaks were subject to continued debate at the US Open on Tuesday, as American Reilly Opelka took aim at the tennis media.

“The press that have never stepped foot on a tennis court in their life, have never been in the environment, couldn’t last 30 minutes out in this humidity, in this heat,” he said, adding that he highly doubted Tsitsipas was getting coached.

But Alexander Zverev, who objected to Tsitsipas leaving the court during their Cincinnati semi-final earlier this month, said the behaviour was unacceptable from someone of his stature in the sport.

“It’s happening every match. It’s not normal,” he said. “He’s one of the best in the world at what he does. I do not believe that he needs to do that.”