The world’s top-ranked team only needed a draw to qualify from the top tier’s Group 2. Belgium finished the group phase with a five-point lead over Denmark and England, joining France, Italy and Spain in next year’s Final Four. Romelu Lukaku scored twice as Belgium beat Denmark 4-2 on Wednesday to book a spot in the Nations League’s finals.

The world’s top-ranked team only needed a draw to qualify from the top tier’s Group 2. Belgium finished the group phase with a five-point lead over Denmark and England, joining France, Italy and Spain in next year’s Final Four.

Lukaku reached 57 goals for his country with two clinical finishes, while Youri Tielemans delivered yet another excellent performance rewarded by a goal. The Leicester midfielder also created his team’s second goal when Denmark threatened to pull ahead following Jonas Wind’s equalizer.

Lukaku’s two goals came in the second half before a blunder by goalkeeper Thibaut Courtois three minutes from time gifted Denmark a second goal and maintained a bit of suspense until the end. Kevin De Bruyne completed the scoring on the counter in the 88th.

“It’s a relief we made it,” Tielemans said.

Playing in an empty stadium because of coronavirus restrictions, Tielemans broke the deadlock inside three minutes. Lukaku was dispossessed in the box but the Danes failed to clear the ball. Tielemans, who already scored from long range in a 2-0 win against England last week, latched onto it and fired a low shot from outside the area into the bottom right corner.

The Danes pressed high but lacked pace and could not find space. However, a flash of brilliance from Christian Eriksen brought them back in the match in the 18th minute after the Inter Milan player set up Martin Braithwaite with a long pass on the right side. The striker’s shot took a deflection and Wind headed home the rebound.

The goal injected confidence into Denmark and Braithwaite had another chance to score but lost his one-on-one with Courtois. The hosts responded with a header from Lukaku that landed inches wide near the half-hour mark. 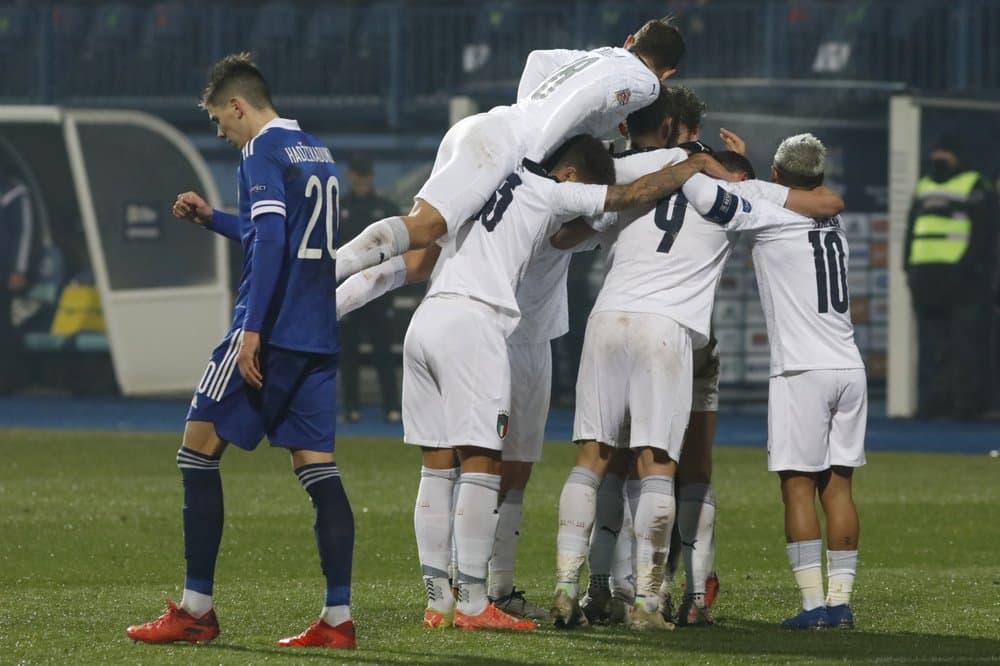 Italy advanced to the Nations League Final Four by beating Bosnia-Herzegovina 2-0 on Wednesday.

Andrea Belotti and Domenico Berardi scored in a game that Italy dominated to ensure it finished top of Group 1 and earned the right to host the Nations League finals in October.

Federico Bernardeschi also hit the crossbar late on with one of Italy’s numerous chances.

Italy will be joined in the tournament finals by France, Belgium and Spain.

“It will be nice to measure ourselves up because we’re talking about the strongest teams in Europe so we can’t wait to compare ourselves to them to see our level, how far we’ve come,” assistant coach Alberico Evani said.

Evani filled in for head coach Roberto Mancini, who is self-isolating after testing positive for the coronavirus.

Italy finished a point ahead of the Netherlands, which scored two late goals to win 2-1 in Poland.

Bosnia was already mathematically relegated to League B. Sent home by Gareth Southgate in disgrace three months ago, Phil Foden is back in the England manager’s affections again.

The 20-year-old midfielder not only set up Declan Rice’s opener but scoring his first international goals with a late second-half double as England beat Iceland 4-0 in the Nations League on Wednesday.

On only his third appearance, he became the youngest Englishman to score more than once at Wembley for his country.

It was only in September that the Manchester City player made his England debut — in the 1-0 win in Iceland in September — before he broke coronavirus regulations by meeting women from outside the team’s bubble with teammate Mason Greenwood.

Both were ordered back to England from Reykjavík to protect the health of the team, missing the 0-0 draw with Denmark. They were also dropped from the squad for October’s international triple-header, with only Foden recalled for this month’s final fixtures of the year for Gareth Southgate’s side.

Netherlands come from behind to beat Poland 2-1 The Netherlands came from a goal down to beat Poland 2-1 in the Nations League on Wednesday, but it was not enough to earn last year’s runner-up a place in the finals.

The result in Poland was ultimately irrelevant as Italy beat Bosnia 2-0 in Sarajevo to win Group 1 by a single point ahead of the Dutch and advance to the Final Four.

Kamil Jozwiak gave Poland the lead when he outpaced Davy Klaassen in a sprint from the halfway line, cut inside Stefan de Vrij and rolled the ball into the goal off the inside of the post in just the sixth minute.

Memphis Depay equalized from the penalty spot in the 77th and captain Georginio Wijnaldum deflected a corner into the net in the 84th.

The Netherlands, which lost the final last year in the first edition of the Nations League, made four changes from the team that beat Bosnia 3-1 on Sunday. Star striker Robert Lewandoski was fit enough to start for Poland, although he was substituted at halftime.

Apart from a shot by Przemyslaw Placheta immediately after the break, the second half was one-way traffic as the Netherlands pressed forward in search of a goal.

It finally came in the 77th minute when Depay converted a penalty after Jan Bednarek had pushed Wijnaldum. The Dutch captain, who scored twice against Bosnia on Sunday, secured the win seven minutes later when he turned in a corner.