‘The only issue for me as far as the Indian team is concerned is the batting.’
‘When we lost in New Zealand, the batting was the major issue.’

The ICC World Test Championship final could prove to be the biggest game in the history of Test cricket, believes former India wicket-keeper and ex-chief selector Kiran More.

Virat Kohli’s India come into the big game devoid of match practice but will take confidence from their memorable series triumph in Australia earlier this year and their home series win against England.

New Zealand cannot be taken lightly courtesy of their pace attack which can be a handful in the helpful conditions in England. The Kiwis have a two Test series against England to get acclimatised ahead of the WTC final.

“The World Test Championship final is not like any other Test match. You will need to be in the game all five days, so it will be a mental battle too,” More tells Rediff.com‘s Harish Kotian.

How do you rate India’s chances in the WTC final? Will it be a clash of two of the best pace bowling attacks?

New Zealand have been doing well in Test cricket in the last 3-4 years. They have a good Test team consisting of a top class fast bowling attack. They have some world class batsmen too.

We have not played New Zealand at home recently, we lost to them when we visited them last year. But I still believe India has a good chance to win the World Test Championship final.

India has a complete team. All our fast bowlers are fit this time around. They can be handful on any wicket. We have Jasprit Bumrah, Ishant Sharma, Mohammed Shami and someone like Mohammed Siraj who has taken his bowling to a different level altogether.

And all these fast bowlers bowl very well to left-handers, so it is not going to be easy for New Zealand who have quite a few left-handers in the top order.

And don’t forget we have two world class spinners in Ravichandran Ashwin and Ravindra Jadeja.

And if you see our batting line-up, what can be better than having Virat Kohli, Rohit Sharma, Ajinkya Rahane, Cheteshwar Pujara and Rishabh Pant? They can single-handedly win matches on their own.

The World Test Championship final is not like any other Test match, it is like a World Cup final.

You will need to be in the game all five days, so it will be a mental battle too.

I believe India has a better chance to win the World Test Championship final even though their preparations have not been ideal with so many days spent in quarantine ahead of the match.

It won’t be easy for the Indian team, but I think the players are capable of delivering the goods despite the problems.

New Zealand have a slight advantage in terms of preparation as they are playing England in a two-Test series before the World Test Championship final.

Who among Ashwin and Jadeja should play if you are looking to play one spinner?
Will the team consider Jadeja’s all-round skill or the mastery of Ashwin?

The decision on the team composition will depend on the conditions and the pitch. The team management will have to consider whether to go in with three fast bowlers and a spinner, or whether they want to play an extra spinner as the all-rounder.

The big advantage for India is that both spinners can bat. Ashwin has five centuries in Tests while Jadeja has also scored a hundred.

If they both play, they can bat in the lower order, so we will have two all-rounders in the team and it will add a lot of balance to the team.

While the bowling attack seems to be one of the best in the world, there seems to be some concern with the batting department.

The only issue for me as far as the Indian team is concerned is the batting. We have not clicked as a unit in our batting.

If you see when we lost in New Zealand, the batting was the major issue. Even in Australia, our batting didn’t click together as an unit, we had to depend on a few individuals.

When we needed, Ajinkya Rahane got a century in Australia, then Rishabh Pant played some good knocks, then in the lower order guys like Washington Sundar and Ravichandran Ashwin also contributed with the bat.

Will you say the top order is a concern? While Rohit Sharma is certain to start, who should open with him?
Should India continue with Shubman Gill or should they bring in Mayank Agarwal or K L Rahul?

Mayank Agarwal has scored a lot of runs in Test cricket while Rahul hasn’t played much Test cricket recently.

So I would say it will be a toss-up between Mayank and Gill for the second opener’s slot.

I have a lot of respect for Rahul. He is a terrific player, but you can’t straightaway put him in the Test team in such a big game, he will find it difficult.

It will be a tough call for the team management, but if you ask me it will be a call between Gill and Mayank. 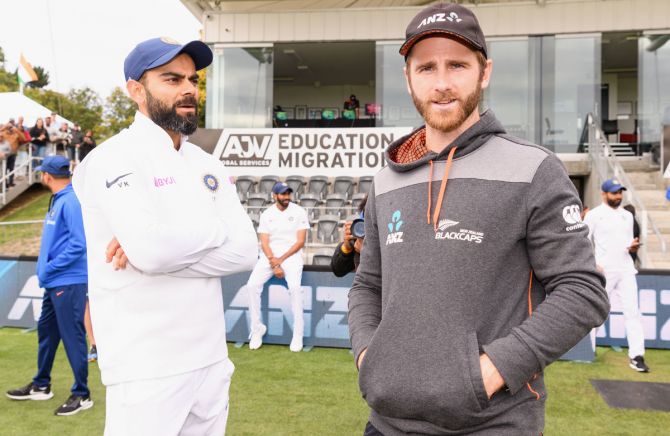 The one battle everyone is waiting for is between Virat Kohli and Kane Williamson. How eagerly are you looking forward to that clash?

Virat and Williamson are definitely the top two batsmen in the world. They have been captaining their side for the past few years and they have a good record both as captain and as a batsman.

Personally, I am looking forward to watching them both bat.

They don’t have to prove anything to anyone except that it is a final and they will be aware whoever does well and leads his team to victory, he will be hailed as a champion player.

Both of them are outstanding, they have played some amazing innings across all formats and I have no doubt they will go down in the history of cricket as one of the greats.

As a former wicket-keeper how happy are you with the rapid improvement shown by Rishabh Pant in the last one year, with both bat and gloves?

Rishabh has always been good. He came into the Indian team very young and he needed time to settle down. I believe he has settled down nicely now.

This is his second tour to England, in fact the third tour if you consider the World Cup in 2019. He knows the conditions well, he has scored a century in a Test match. With the gloves too, I believe he will do a good job.

If a batsman scores hundreds in tough away conditions like England and Australia, then you know that player is something special.

Rishabh played some crucial knocks with the bat in Australia to help us win the Test series. I feel he will once again be the key player for us in the World Test Championship final and also in the England series.

He is on top of his game at the moment and I think he feels confident enough to change the course of the game with the bat from any position. What tips would give Pant because wicketkeeping is not easy in England?

In England, as a wicket-keeper you have to watch the ball till very late. The wickets in England are very different from the wickets you get in Australia or India. The ball wobbles a bit in England so you have watch it till the very last minute.

You have to watch the ball and take it very close to the body. You should be steady when receiving the ball in the gloves.

When the ball wobbles, you need a bit of luck too because it is not easy to keep wickets.