Ariarne Titmus and Elijah Winnington led podium sweeps as Australia got the Commonwealth Games swimming competition off to an explosive start on Friday, scooping 11 medals in total including five golds.

There have been questions about the competitiveness of some events at the Birmingham Games but that was not the case in the pool where World records were under threat and great racing lit up the first day of action.

Although at times the night looked like the Australian Olympic trails, there was an electric atmosphere inside Sandwell Aquatics Centre.

Most of that excitement was generated by the Australians, who have brought their A Team of swimmers to Birmingham, led by 400m freestyle World record holder Titmus and Emma McKeon, winner of seven medals at last summer’s Tokyo Olympics. The evening began with World champion Winnington leading an Australian medal sweep in the 400m freestyle and finished with Australia fighting off a brave challenge from England to touch first in the mixed 4×100 freestyle relay.

The Australians did not have it all their way the entire evening, Canadian teenager Summer McIntosh underscored her status as the next big thing in women’s swimming with a dominating victory in the 400m individual medley adding Commonwealth gold to her world championship title.

There have only been nine swims in history to go sub-4:30 in the event and McIntosh now owns two of them.

“I got a lot of buzz off the crowd, seeing all of the people out there,” said McIntosh. “I’ve been working on a lot of stuff in training so I can execute my 400m IM better than I did at worlds, because I had so much room for improvement – and I still do.” 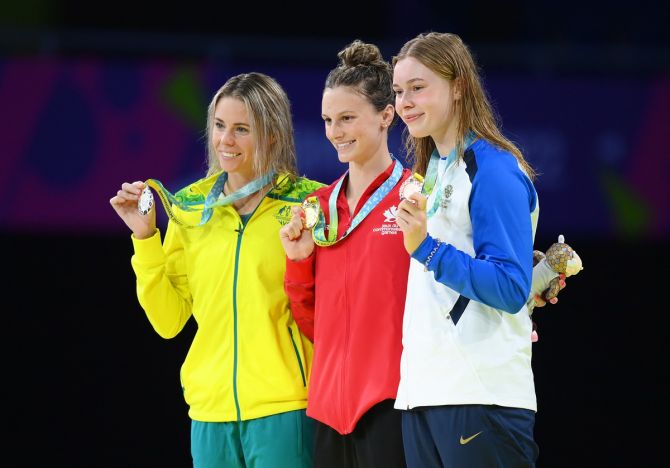 Titmus, well rested and ready to race after skipping the World Championships, came into the 200m freestyle final targeting gold and tipped to break the oldest world record in women’s swimming.

The 21-year-old led from the gun and was chased hard to the wall over the last 50 metres by Mollie O’Callaghan, touching in a Games record of 1:53.89. However, she could not break Federica Pellegrini’s mark of 1:52.98 that was set in 2009 during the sport’s notorious super-suit era.

O’Callaghan finished just .12 back for silver and Madison Wilson took the bronze to complete a second Australian sweep.

“I don’t really think about records,” said Titmus. “I knew there was a bit of hype around the world record but I really don’t think about that much, I just go out there and try and race the best I can.” Australian Olympic and World champion Zac Stubblety-Cook added Commonwealth gold to his growing collection, winning 200m breaststroke but was made to work for every bit by England’s James Wilby, who had the crowd on its feet roaring as he made a late move on the world record holder to take silver.

Adding to a dazzling night for Australia was Timothy Hodge, who grabbed gold in the para men’s 100m backstroke S9.