Images from Day 2 of the third Test between Australia and India, at the SCG, on Friday.

Ravindra Jadeja denied Marnus Labuschagne a deserving hundred as India’s bowlers reduced Australia to 249 for 5 at lunch on the second day of the third Test, at the Sydney Cricket Ground, on Friday.

In a stop-start first session, Labuschagne, who was looking good on 91, got an arm ball from Jadeja, which bounced a bit more, denying him room for a non-existent cut shot. The result was a smart catch by skipper Ajinkya Rahane, who positioned himself a bit wide at first slip. 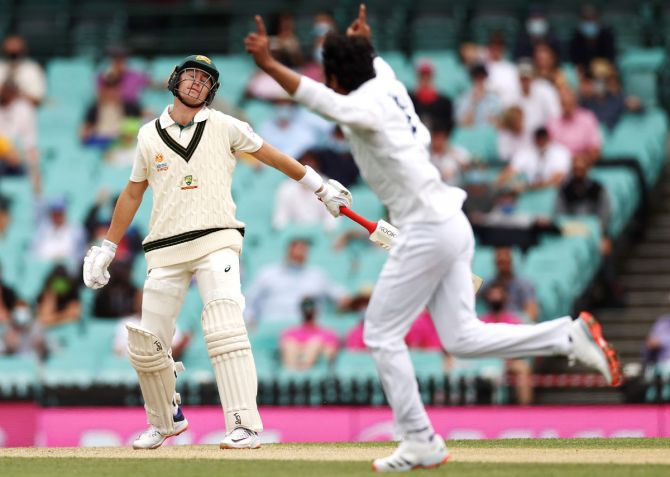 Jadeja (2/43 in 12 overs) then dismissed a fidgety Matthew Wade (13), who came down the track and scooped a simple skier for Jasprit Bumrah, as India finally had a good session after a rather uneventful first day in which the home team had the upperhand.

At the stroke of lunch, Bumrah (1/37 in 19.5 overs) bowled a beauty to trap Cameron Green leg before. Before the three dismissals, Labuschagne and Smith added 100 runs for the third wicket. Labuschagne’s 196-ball innings was studded with 11 boundaries. No one deserved a three-figure score more than him.

The duo, in a bid to neutralise India’s leg-side field, played some eye-catching strokes. Smith (76 batting, 159 balls), in fact, completed his half-century in the next over after Labuschagne’s dismissal, off Ravichandran Ashwin (0/74 in 24 overs), who has been well below his best during the four sessions that India have been on field. Smith and Labuschagne faced little trouble as they blended caution with aggression perfectly during the first hour on a track that’s offering slow turn with no visible demons in it.

The Indian bowlers continued bowling in straight lines with a heavy leg-side field that they have been employing since the second Test match. What changed for Australia was the understanding of the opposition strategy better as they showed aggressive intent. While Jadeja got a couple of wickets, both Ashwin and him erred on the shorter side of the length giving Smith ample opportunity to rock back and play through the vacant spaces in the off-side area.

Once a couple of wickets fell, Smith started attacking even more, prompting Rahane to slightly spread the field as runs started coming at a fair clip. The former Australia captain went into the break with 11 fours in his kitty.