Only the fourth time in 115 editions of the world’s oldest soccer rivalry, dating back to 1872, that a game ended goalless and the first time ever at Wembley.

England’s ambitions to be crowned kings of Europe got a cold dose of reality as they were held to a 0-0 draw by a gutsy Scotland side in a Euro 2020 ‘Battle of Britain’ on Friday.

Victory for Gareth Southgate’s England side in the eagerly-awaited Group D clash at a rain-swept Wembley stadium would have sealed a place in the last 16 but they produced a nervous performance against the Scots, who kept their own hopes alive.

Scotland’s Tartan Army had swept south into London for the first match against the Auld Enemy in a tournament finals since England’s 2-0 Wembley win at Euro ’96.

They could have headed back across the border savouring an historic victory for Steve Clarke’s side who matched their supposed superiors throughout an absorbing contest. 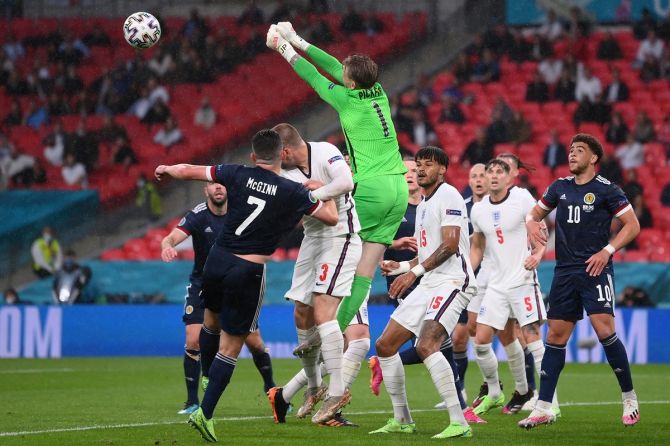 As England’s anxiety levels increased after the break, Lyndon Dykes had an effort cleared off the line by Reece James while Che Adams slashed a late effort wide.

It was only the fourth time in 115 editions of the world’s oldest soccer rivalry dating back to 1872 that a game ended goalless and the first time ever at Wembley.

England, whose starting XI had an average age of 25 years 31 days — their youngest ever in a major tournament — managed only one shot on target, although John Stones did thump a header against the woodwork.

It was a dispiriting evening for manager Gareth Southgate and not even the introduction of Jack Grealish after the interval could unlock the Scots rearguard.

The sight of skipper Harry Kane trudging off to be replaced by Marcus Rashford after a worryingly ineffective performance summed up England’s night. 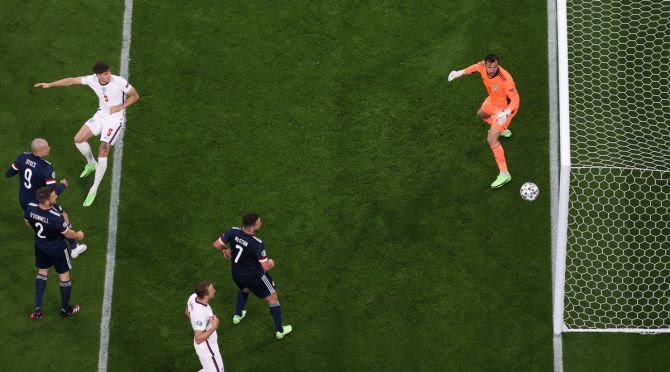 “Fair result, fair play to Scotland they defended well,” Kane said, though that was doing a disservice to a Scotland outfit who were the better side.

“It wasn’t our best performance, but it’s another point closer to qualification and that’s our ultimate goal.”

England are level on four points with the Czech Republic who they face at Wembley on Tuesday when Scotland and Croatia, who each have one point, meet at Hampden Park in Glasgow.

Scotland will face Croatia with renewed belief after a superb reaction to their 2-0 home defeat by the Czechs.

“Everybody’s buzzing after that,” midfielder Callum McGregor said. “I thought every player was first class, outstanding to a man. We needed that performance to keep us alive in the group.”

While too many of England’s players underperformed, Scotland’s played out of their skins with Chelsea youngster Billy Gilmour outstanding on his first start. 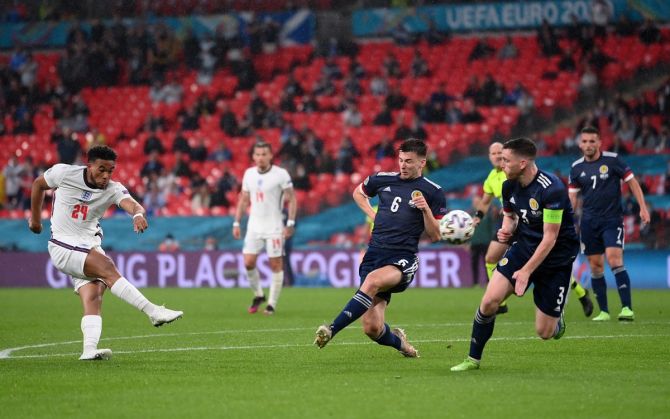 When the heavens opened again shortly before kick off it felt like the perfect conditions for Scotland’s ‘Bravehearts’ to upset the odds on the Auld Enemy’s turf.

Adams, one of four changes from the side that started against the Czech Republic, almost drew first blood for the Scots in the fourth minute when his goalbound shot from O’Donnell’s cut back struck Stones.

England responded with Stones rattling the frame of the goal from a corner by Mason Mount, who then wasted a glorious chance, prodding wide after good work by Raheem Sterling.

England never looked in control and were indebted to Jordan Pickford for a great low save from O’Donnell’s volley.

England were crying out for the dribbling skills of Grealish and they failed to land a shot on target in the first half of a match at Wembley for the first time since 2017.

Scotland, on the other hand, reached the interval growing in belief that something special was brewing.

Southgate resisted the temptation to play his cards at halftime and England began the second period well with Mount’s fierce shot forcing Marshall into his first save.

James, one of two changes to the England side that beat Croatia on Sunday, then lifted a shot over.

It was all too frantic for the hosts though and England suffered another scare when Dykes’ effort looked like creeping in before James headed clear.

Grealish entered the fray, replacing Phil Foden, but England were bogged down and rarely looked like breaking through as Scotland clung on for a share of the spoils and cheered long and loud by their travelling fans.