A frustrated Coco Gauff broke down in tears after her 7-5, 6-3 defeat by Jelena Ostapenko at the Australian Open on Sunday, with the 18-year-old American saying she just could not come up with the answers to the Latvian’s game.

Gauff came into the tournament having enjoyed a superb 2022 where she reached the French Open final but it was former Roland Garros champion Ostapenko who dominated the contest to set up a quarter-final meeting with Wimbledon champion Elena Rybakina.

“I think every loss is somewhat in my control because I do feel like I’m a good player, but today she just played better,” Gauff, seeded seventh, told reporters.

“There were moments in the match where I was getting frustrated because I normally can problem solve but today I feel like I didn’t have much answers to what she was doing.

“There were balls I was hitting deep and she was hitting them on the line and hitting them back deep, like, over and over again. It’s just one of those days that just didn’t go my way and went her way.” 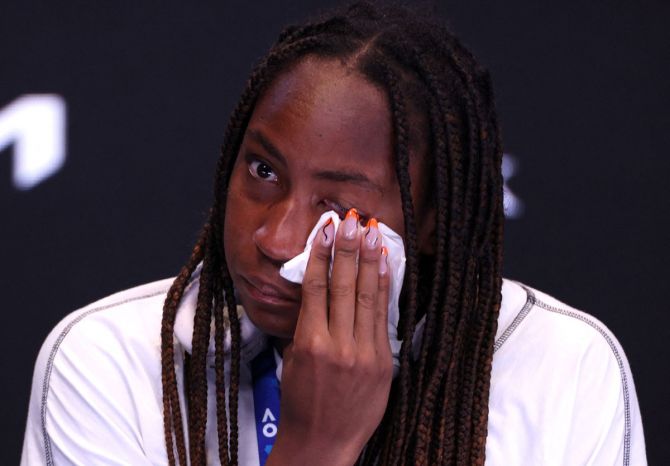 Gauff began to tear up when asked to explain her frustrations.

“I think it’s because I worked really hard and I felt really good coming into the tournament and I still feel good,” Gauff said. “I still feel like I’ve improved a lot.

“But when you play a player like her and she plays really well, it’s like there’s nothing you can do.

“So it’s a little bit frustrating on that part.” Gauff is partnering fellow American Jessica Pegula in the women’s doubles at Melbourne Park and she said playing in the format helps her get over the disappointment of defeat.

“I think doubles has taught me how to play after losing, how to play with frustration,” Gauff added.

“So I feel like it’ll help me in the future. Bouncing back from a loss is difficult in a Grand Slam but I’m looking forward to tomorrow. I hope I can help her and I hope that she continues well in the (singles) tournament now that I’m out.

“I hope she wins it. I knew we would probably face each other if we both kept winning. I’m rooting for her all the way.”