Images from Sunday’s action in the Premier League.

Jesse Lingard’s hot streak continued with two goals as West Ham United climbed back into fourth spot in the Premier League with a 3-2 victory over third-placed Leicester City on Sunday.

Lingard, who has been in scintillating form since arriving on loan from Manchester United in mid-season, took his tally for the Hammers to eight goals with two strikes before half-time.

When Jarrod Bowen made it 3-0 shortly after the interval and Issa Diop’s effort was ruled out for off-side, the home side were rampant at the London Stadium.

But what happened after that suggests West Ham fans will need to strap themselves in for the remaining seven games of the season as once again they turned a position of comfort into a one requiring extra sets of fingernails.

Leicester, weakened by the absence of Ayoze Perez, James Maddison and Hamza Choudhury, who were omitted for a breach of COVID-19 protocols, finally began to show the intensity required and got a lifeline when Kelechi Iheanacho fired home with 20 minutes left.

West Ham, who squandered a 3-0 lead to draw with Arsenal last month and almost did the same against Wolves in midweek, looked nervy and Iheanacho ramped up the tension with a second goal in stoppage time.

Manager David Moyes paced the touchline frantically but West Ham survived six added minutes to maintain their quest for an unlikely top-four spot. They moved back above Liverpool and Chelsea with 55 points from 31 games, one point behind Leicester who suffered a second successive league defeat.

“We almost made a mess of it at the end. It has been like that for three games,” Lingard said. “We are still learning.

“It is great. We are in something to fight for. Games are like cup finals. We grind out the wins and take the points home. The lads battle on. There is a big belief in the team.” 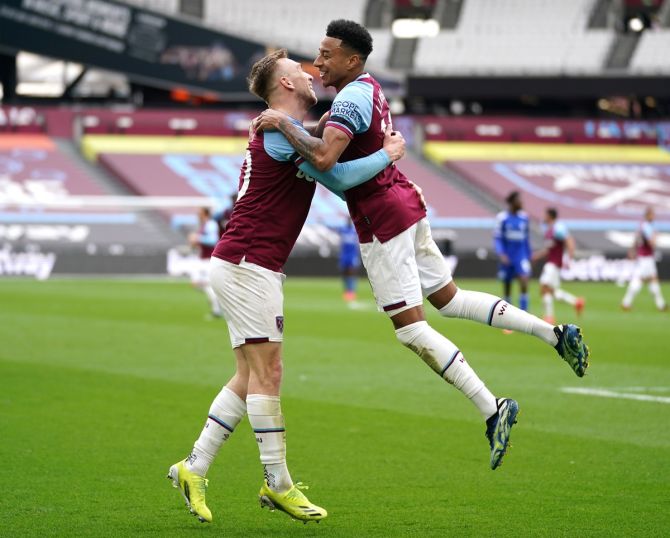 After Liverpool’s last-gasp win over Aston Villa on Saturday and Chelsea’s victory over Crystal Palace the pressure was on West Ham to respond against an injury-weakened Leicester side whose stranglehold on a top-four place is loosening.

While Leicester enjoyed plenty of early possession West Ham showed the clinical edge Moyes has instilled in them.

They took the lead in the 29th minute when Vladimir Coufal played the ball in towards Lingard who improvised a sensational first-time curling volley with his right instep which completely bamboozled Leicester keeper Kasper Schmeichel.

Leicester conceded again just before halftime when Bowen galloped down the right and crossed for Lingard who slotted into an empty net for his eighth goal in nine league games.

Lingard was also involved in the move which saw Tomas Soucek’s pass set up Bowen to make it 3-0.

A sloppy pass by Arthur Masuaku was punished by Iheanacho in the 70th minute and when Iheanacho fired past Lukasz Fabiański in stoppage time West Ham were rocking.

In a frantic finale, Schmeichel went forward at a Leicester corner and Wesley Fofana headed a great chance wide. 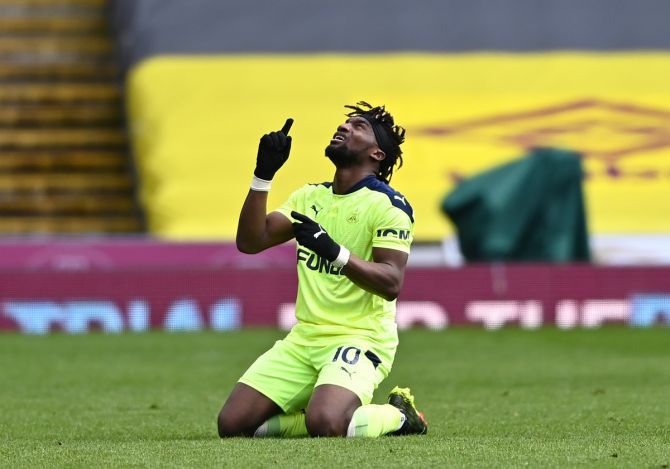 Frenchman Allan Saint-Maximin came off the bench to turn the game around for lowly Newcastle United as they came from behind to earn a vital 2-1 Premier League win at Burnley, earlier on Sunday.

Burnley had led through an 18th-minute goal from Czech striker Matej Vydra and were well on top before substitute Saint-Maximin changed the game inside seven minutes with an assist and a goal.

The result will ease the nerves of Newcastle fans whose team are now six points above Fulham, who occupy the final relegation spot. Steve Bruce’s side, in 17th place, also have a game in hand and are just a point behind 15th-placed Burnley.

Sean Dyche’s team still have work to do to make sure of top- flight survival and will be bitterly disappointed to have got nothing from a game they dominated.

The Clarets made a lively start and broke through when Chris Wood pulled the ball back to Vydra who confidently slotted home.

Dwight Gayle had the ball in the net for Newcastle but was flagged offside and Burnley keeper Bailey Peacock-Farrell, in for the injured Nick Pope, did well to keep out a near-post flick from the forward.

Newcastle keeper Martin Dubravka made a reflex save to keep out a potential own goal from Paul Dummett and he was alert to tip over a thunderous effort from Matt Lowton.

Burnley put Dubravka’s goal under intense pressure and needing a change of momentum Newcastle manager Steve Bruce made a double substitution in the 57th minute, sending on Callum Wilson and Saint-Maximin who were both returning from injury.

The move worked in spectacular fashion as after being on the field for two minutes Saint-Maximin set up Jacob Murphy for a superbly struck equaliser from outside the box.

The Frenchman showed his individual ability with a brilliant goal to put Newcastle ahead, picking the ball up on half-way and running at the Burnley defence before jinking to create space and unleashing a lethal drive into the bottom corner.

Saint-Maximin caused more trouble for Burnley in the final minutes, getting to the byline before picking out Miguel Almiron whose low shot was cleared off the line by James Tarkowski.