“We have cycled to lot of cities in Europe and Asia during this Race to Rugby World Cup and we have been asked whether we have found any city so far, where we can settle. Just today morning, after the ride in Chandigarh, we texted some friends saying that Chandigarh is that city for us." 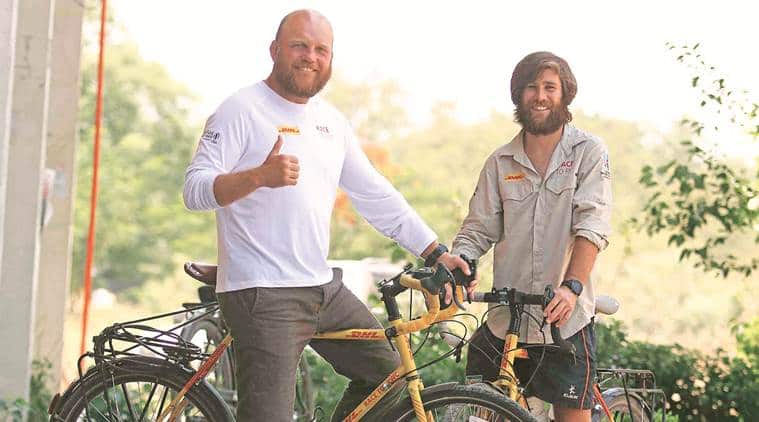 On Tuesday morning, as cyclists Ron Rutland and James Owens took a ride with some cyclists from cycling clubs from Chandigarh at the Sukhna Lake, the duo were stopped by a Chandigarh Police officer and were directed to cycle on the adjoining cycling track. The duo, who have been cycling from London to Tokyo as part of Race to Rugby World Cup (RWC) via one of the official sponsors of the event, completed 10,000 kms out of the 20,000-kms journey and found Chandigarh to be one of the best cities in Asia for cycling.

“We have cycled to lot of cities in Europe and Asia during this Race to Rugby World Cup and we have been asked whether we have found any city so far, where we can settle. Just today morning, after the ride in Chandigarh, we texted some friends saying that Chandigarh is that city for us. It has wide roads, dedicated cycle paths and a lot of greenery. This morning, when were cycling on the road, a lady police officer told me to cycle on the track. It has to be one of the best memories of this trip for us,” said Rutland, who worked in an event management company in South Africa before taking this challenge.

Rutland and Owens started the cycle ride through 27 countries in February this year. Their journey is an initiative of international logistics company, DHL. It is also one of sponsors of Rugby World Cup. The race will culminate in Tokyo, Japan, on September 19, a day before 2019 Rugby World Cup starts. The cyclists have so far cycled across Europe , Central Asia and Pakistan before entering India via Attari border last week. The cyclists are also carrying official match whistles, which will be given to referees for opening match.

“Apart from the physical and mental challenge, the journey so far has given us an opportunity to meet people from diverse backgrounds. Everyday, we met new people and people have joined us for cycling. When we started from Europe, it was winters and the weather was harsh. In countries like India, temperature is touching close to 42 degrees and it is one of the challenges. But that’s what we wanted to experience and it has been a learning journey for both of us,” said Owens, who is based in Vietnam and works for Child Fund Pass It Back, a charity supporting rugby in Asia.

The duo also met some of the rugby players competing in the Chandigarh Rugby Championship and officials from Rugby India in the evening Tuesday. Even though rugby is not as popular in India as it is in Europe and other countries, the cyclists believe that the sport has the potential to grow in India. “Rugby has got massive potential in India. Even though not many people know about the sport, the fact that the youngsters can play it on a grass ground and practice with a normal rugby ball, makes India a country to watch for. Rugby India has been running a lot of coaching seminars and other tournaments and I guess India will see a rise in the number of players opting for this sport,” added Owens.