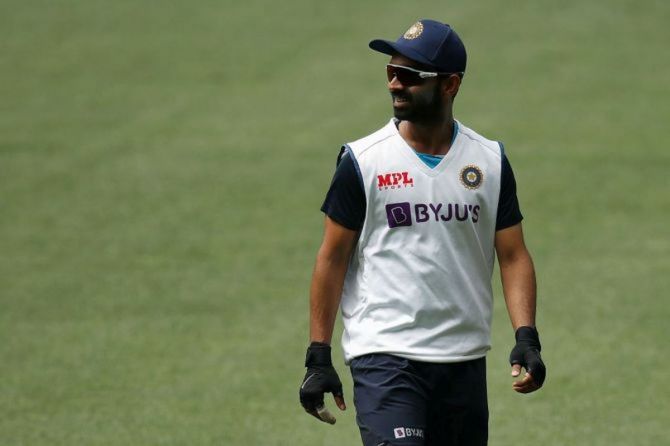 Ajinkya Rahane isn’t the batsman he used to be, says Deep Dasgupta, the former India player and commentator.

In a video uploaded on his YouTube channel, Deep cites one of Rahane’s innings in testing conditions at the Wankhede Stadium. The reason why Rahane was so successful away from home, he adds, was that he came in at No 3 for Mumbai and was used to playing the new ball.

‘I don’t think Rahane is the same player that he was,’ Deep says. “In 2015-2016, Rahane was unbelievable. He was a player that I saw playing for Mumbai. The Wankhede pitch on the first morning was moist, the pitch had grass and it was a nightmare batting there those days.’

‘But Rahane scored more than 4,000-4,500 runs before playing for India, batting predominantly at the No 3 position.’

Since Rahane is skilled at playing swing bowling abroad, he is often caught off-guard by reverse swing at home, Deep says.

‘When you bat in India, your skillset changes,’ Deep points out. ‘You play swing and pace outside, but here you need to play reverse swing. If you go and check Rahane’s footwork in 2015-16, you will realise that his footwork is not that definite.’

‘He is very tentative in his first 20 balls and whenever he plays a big innings, he is a lot more confident.’

Rahane scored of 49 and 15 in the World Test Championship Final.

‘She screamed saying a big part of the hill had crashed. Then phone got disconnected’
Lifestyle

Muted celebrations amid Covid curbs as ICSE, ISC results out