Rohit Sharma has scored 647 runs including 5 centuries from 9 matches in the 2019 World Cup so far. Here's the timeline of his record-five centuries in the cup. 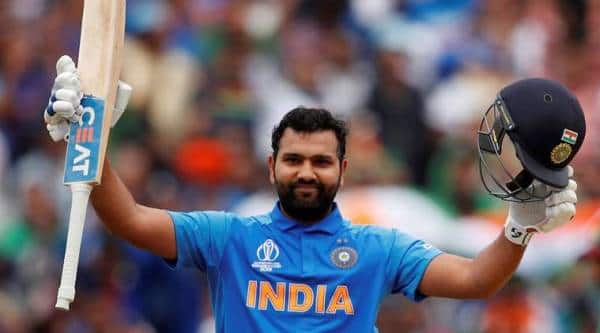 Rohit Sharma started off his World Cup campaign with an unbeaten 122 against South Africa at the Rose Bowl in Southampton on June 5. He led a tricky chase for India with a ton before scoring 57 against Australia. The Indian opener reached his 23rd ton in 128 balls, hitting 10 fours and two sixes in the process. His valiant effort with the bat helped India beat South Africa by 6 wickets and 15 balls to spare.

Rohit Sharma stamped his authority when he hammered his second ton of the World Cup 2019. It came against arch-rivals Pakistan at Old Trafford at Manchester on June 16. Asked to bat first, Rohit Sharma took the attack by the scruff of the neck and scored on all sides of the ground with KL Rahul. Rohit Sharma had a couple of close shaves when he could have been run out, but kept ticking off the runs as India looked set for a big score. Rohit Sharma went on to smash 140 off just 113 with 14 fours and three sixes. He also hit one over the backward point which was quite similar to Sachin Tendulkar’s 2003 World Cup six against Pakistan at Centurian. This was Rohit Sharma’s second century in World Cup 2019 and 24th ODI century.

Rohit Sharma’s Midas touch continued even against the toughest opponents. He scored a brilliant hundred against England at Edgbaston in Birmingham on June 30 to keep India in the game. Chasing a challenging total of 338, India started cautiously after losing the wicket of KL Rahul in the third over. Rohit Sharma was looking out of touch initially in his innings but he didn’t throw his wicket away. Rohit built an important partnership of 138 with India skipper Virat Kohli. Kohli lost his wicket for 66. On the other hand, Rohit kept going strong and registered his 25th ODI hundred and third of this World Cup. India. Rohit took 109 balls where he hit 15 fours.

His next masterclass was on display against Bangladesh when he blasted 104 off just 92 deliveries and helped India beat Bangladesh by 28 runs in Birmingham on July 2. With the win, India secured a semi-final berth. With the ton, he became highest run-scorer in the tournament with 544 runs in just 7 innings at a stunning average of 90.66 and strike rate of 96.96.

His exploits included 4 hundreds – the joint-highest in any single World Cup, along with Kumar Sangakkara in 2015. His run-aggregate in this World Cup is the fifth-highest of all-time after Sachin Tendulkar (673 in 2003), Matthew Hayden (659 in 2007), Mahela Jayawardene (548 in 2007) and Martin Guptill (547 in 2015). Rohit may well top this list as India has a minimum of two matches left in the tournament.

Now with Rohit Sharma’s fifth century of the ongoing World Cup, a number of records are to his name. Rohit Sharma had a 189-run opening stand with KL Rahul, the highest in this tournament. It came in the 31st over. Rohit Sharma gave an easy catch to Angelo Mathews at mid-off after scoring 103 off 94 balls. He smashed 14 fours and two sixes in his knock. Besides, he is now the top scorer of World Cup 2019 leaving Bangladesh’s Shakib al Hasan behind. Rohit Sharma has amassed 647 in 8 matches so far.