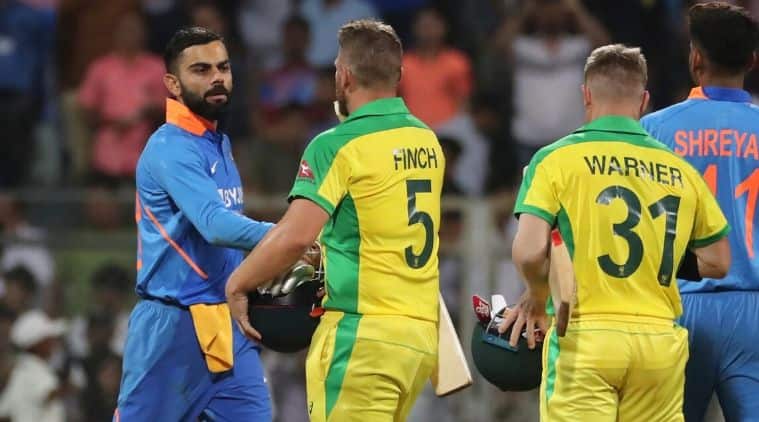 Aussie openers Aaron Finch and David Warner took the team to thrash India by 10 wickets in the first ODI of the three-match series at Wankhede Stadium, Mumbai on Tuesday. Chasing 256 for the win, Finch (110*) and Warner (128*) took the Indian bowlers to the cleaners to register the emphatic win with 74 balls to spare and take a 1-0 lead in the series.

The Warner-Finch pair hit centuries in the largest partnership against India in the ODIs, for any wicket anywhere in the world, as they easily chased down their target of 255 with 12.2 overs to spare. Warner finished on 128 from 112 balls, while Finch was unbeaten on 110 from 114. It marked just the fifth time in history that two Australian openers have both scored centuries in the same game, and it’s the team’s first-ever 10-wicket win in India. While it’s the 5th occasion that Aussies have registered a 10-wicket win in ODI cricket. Highest partnership ever against India:

Finch and Warner ended up breaking a record of the highest partnership against India. Their partnership ended on 258 which is the highest ever in ODI cricket for any wicket against India. This is also the 2nd highest target chased in ODI cricket without losing a wicket. David Warner continued his red hot form from his triple ton in the Adelaide Test against Pakistan.

Aussies leg spinner Adam Zampa (1-53) also got Virat Kohli caught and bowled for 16, as India lost 4-30 after being in a dominant position at 1-132 after 27 overs. It marked the sixth time in Zampa’s international career that he has removed Virat Kohli, by far his best record against any batsman. With his unbeaten knock of 128 runs, Warner becomes the 4th fastest batsman and fastest Australian to score 5,000 ODI runs. The lefty reached the milestone in his 115th innings, which makes him the third-fastest man overall to the landmark, after South Africa’s Hashim Amla (101 innings), and Sir Vivian Richards and Virat Kohli, who both took 114 innings each. He is comfortably the fastest Australian to the mark, taking 13 innings fewer than the next best Dean Jones. Despite losing the World Cup 2019 game to India, Aussies stepped onto the Indian soil with confidence that they had beaten India 3-2 when they came here before the world cup. Notably, Aaron Finch’s men had overturned a 2-0 deficit to win a 5-match series 3-2 in 2019 in India and this loss at Mumbai in the first ODI is India’s 4th successive loss to Australia in ODIs at home. On the other hand, Australia have won nine straight ODIs in Asia, dating back to last year – their best winning streak.

‘NO NRC’, ‘NO CAA’ protest during India-Australia clash at Wankhede

Might have to rethink batting position: Virat Kohli after losing 1st ODI to Australia