A man wearing a jersey declaring support for anti-government protesters in Iran was escorted by security officers into the stadium where the national team was due to play a World Cup match with Wales on Friday, a Reuters witness said.

Reuters could not immediately confirm why the man, wearing a shirt declaring “Women, Life, Freedom”, was being accompanied by three security officers in blue.

The media liaison at the stadium for world governing body FIFA did not immediately respond to a request for comment, while the stadium media manager was not aware of the incidents but would respond later. 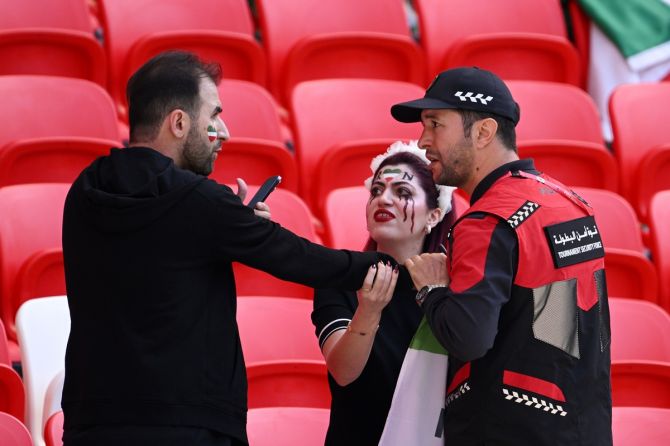 A spokesperson for the organising supreme committee referred Reuters to FIFA and Qatar’s list of prohibited items, but without saying which prohibited item the fan was carrying. The rules ban items with “political, offensive, or discriminatory messages”.

Another anti-government Iranian fan told Reuters she had sneaked a T-shirt past security into the stadium grounds but that her friends had been turned away because of their T-shirts which read “WOMEN LIFE FREEDOM”.

Inside the stadium, a woman with dark red tears painted from her eyes held aloft a soccer jersey with “Mahsa Amini – 22” printed on the back – a reference to the 22-year-old Iranian Kurdish woman whose death in police custody two months ago ignited the nationwide protests in Iran, a Reuters photo showed.

A man standing next to her held a shirt printed with the words “WOMEN, LIFE, FREEDOM”, one of the main chants of the protests. 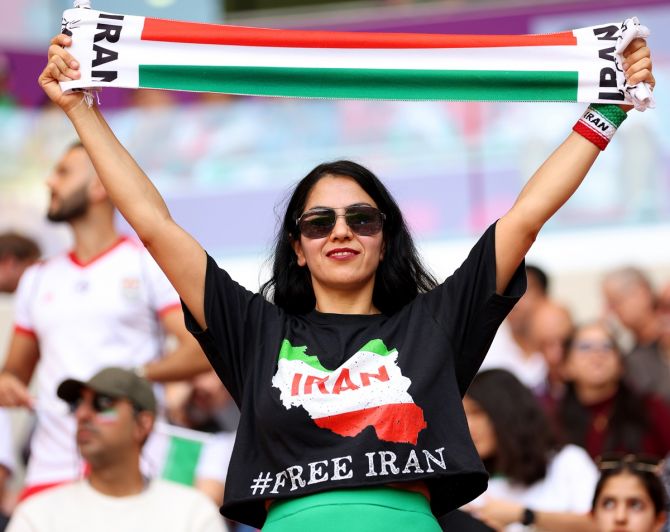 Another supporter held an Iranian flag with the words “Allahu Akbar” (God is Greatest), scored through with black lines as a security man stood nearby apparently pointing at him.

The protests ignited by Amini’s death mark one of the boldest challenges to the Islamic Republic since the 1979 revolution in Iran.

Amini died after being arrested by morality police for allegedly breaching the Islamic Republic’s strict dress codes. Iran’s World Cup team refrained from singing the national anthem ahead of their opening match with England on Monday, a sign of support for the demonstrations.