Tiraspol does not regard itself as part of Moldova. It is, instead, the self-styled capital of Transnistria. 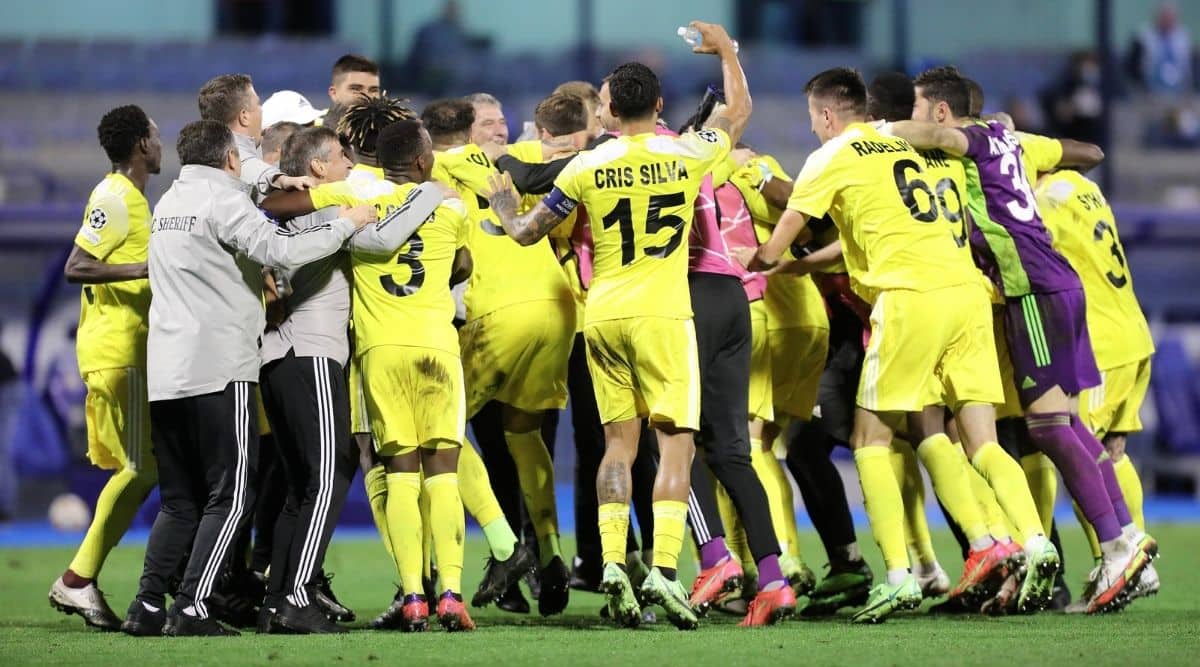 Edmund Addo sank into child’s pose in the middle of the field, his forehead touching the turf, his arms outstretched in front of him, a gesture of supplication and thanks. About 60 yards away, euphoria had overwhelmed his teammate Giorgos Athanasiadis, his legs buckling as two colleagues tried to help him to stand. Their coach, Yuriy Vernydub, danced on the touchline.

They were all relatively recent arrivals to Sheriff Tiraspol: Addo, a Ghanaian midfielder, and the Greek goalkeeper Athanasiadis had joined this summer; Vernydub predated them only by a year. Still, though, they knew what this meant to their team, which had been waiting for this moment for two decades.

And they knew what it meant to them. They had upended their lives to move to a country that does not technically exist, to play for a team based in a disputed territory, to join a club that represents a state-within-a-state, a grayscale place unmoored from the rest of the world. Now, after seeing off Dinamo Zagreb, the Croatian champion, they had their reward: Addo, Athanasiadis and the rest of Sheriff would be in the Champions League. 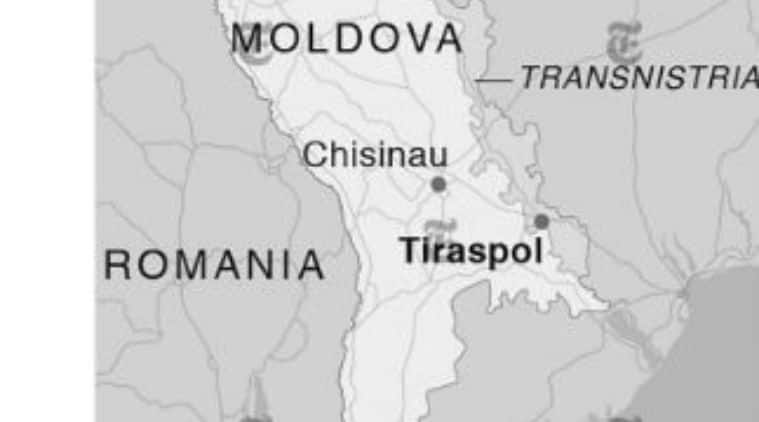 The next day, they would learn the identities of their opponents: Shakhtar Donetsk, Inter Milan and, best of all, Real Madrid would all be coming to Moldova, Europe’s poorest country, to compete in the most revered, the richest, the most-watched competition in club soccer.

At first glance, Sheriff’s story may have the air of a fairy tale, but the details — fittingly — are rendered in shades of gray. Tiraspol, the city where the team is based, may be in Moldova as far as UEFA, European soccer’s governing body, is concerned. Sheriff may be the current, and essentially perennial, Moldovan champion.

But Tiraspol does not regard itself as part of Moldova. It is, instead, the self-styled capital of Transnistria — the Pridnestrovian Moldavian Republic, to give its proper name — a breakaway republic on the left bank of the Dniester river, a 25-mile-wide sliver of land with its own currency (the Transnistrian ruble), its own flag (red and green, with a hammer and sickle) and its own government (the Supreme Soviet).

Sheriff does not fit easily into the role of underdog. It has won all but two Moldovan titles this century. It plays in a state-of-the-art stadium complex built at a cost of $200 million in a league where many of its opponents play on ramshackle fields, surrounded by wasteland, in front of only a few dozen fans.

Its team is full of imports, drawn from Africa and South America and much of Eastern Europe, while its rivals can only afford to field locals. “It rarely buys players for big money,” said Leonid Istrati, a prominent agent in Chisinau, the Moldovan capital. “But only Sheriff can afford good level players. Before, a few other teams could. Now, they can’t.”

The source of the team’s financial power is in its name. Sheriff is the centerpiece of the private economy in Transnistria, a conglomerate founded by two former KGB agents in the chaotic days of the 1990s, after the collapse of the Soviet Union and Transnistria’s war of independence from Moldova.

Its roots, reportedly, lie in the region’s historic smuggling. Transnistria’s liminal status, its porous borders and its opaque history — it is home to one of Europe’s largest weapons dumps — have long made it a haven for all manner of illicit activity, from gunrunning to drug-trafficking and cigarette counterfeiting.

In 2006, the European Union’s border monitoring force estimated that if the territory’s import statistics were accurate, every single person in Transnistria was eating more than 200 pounds of frozen chicken legs every year. Even Sheriff’s founder, Viktor Gushan, has admitted that his company has had to operate “between things.”

Now, though, Sheriff — the conglomerate and the club — is everywhere. It runs a chain of supermarkets. It runs gas stations. It has a winery and a television channel and a phone network. “It is important to remember that the Transnistrian area works entirely for Sheriff Tiraspol,” said Ion Jalba, a journalist and commentator in Moldova. “In Tiraspol, everything is controlled by this company. There are Sheriff shops and Sheriff fuel stations. The soccer club is like a child fed by the whole separatist area.”
It is that which allows Sheriff to pay its players as much as $15,000 a month to play against domestic opponents earning just a few hundred dollars, if they are paid on time. Zimbru Chisinau, historically the biggest team in Moldova, survives only on the rent paid by the national team for the use of its stadium.

That, in turn, has given Sheriff considerable power. Despite the political differences between Moldova and Transnistria, the relationship between Sheriff and the country’s soccer federation, the FMF, is thought to be remarkably close. “Soccer here is in complete control of Sheriff,” said Cristian Jardan, a soccer journalist in Moldova.
The authorities have not only postponed games this season to give Sheriff time to prepare for its Champions League qualifiers, they have also amended their rules on the number of foreign players a team can field in order to allow the club to strengthen its squad, Ion Testemitanu, a former Moldovan international and erstwhile vice president of the country’s soccer federation, said. “No other team in Moldova can compete,” he said.
Many, then, do not even try. Over the last year, Moldovan anti-corruption investigators contend that as many as 20 matches in the country’s soccer leagues have been fixed, with players paid a few hundred dollars by gambling syndicates to guarantee results. One whistleblower told the newspaper Ziarul da Garda that players were instructed that their job was to “earn, rather than to win.”

The corruption is so rife that, in 2015, even Testemitanu was approached by fixers representing a syndicate in Singapore. At the time, he was not only vice president of the national federation — the FMF — but assistant manager of the Moldovan national team, too.

“They took me out to a nice restaurant, they said they wanted information, and then after half an hour they told me what they were proposing,” he said. “They wanted to fix national team games: the youth teams, the women’s teams, everything. I did not say anything, just that I had to think about it. Then, straightaway, I phoned the police, and told them what had happened.”

Testemitanu agreed to wear a recording device, and to be followed by a surveillance team, to help detectives gather evidence. His wife instructed him not to sleep at home, so as not to place his family in danger. “I was frightened, of course,” he said. “I knew it was a risk. But I want normal football in Moldova.” Two weeks later, Testemitanu said, the conspirators were arrested.

That did not stop the problem; in the last year alone, the Moldovan authorities contend fixers have made as much as $700,000 from bribing players to throw games. It is proof, Testemitanu said, of endemic corruption in Moldovan soccer, one that journalists and investigators have documented stretches as high as the FMF itself; an investigation by Ziarul da Garda, for example, found that several high-ranking executives had amassed huge property portfolios while working for the organization.

“The FMF does not invest in Moldovan football,” Testemitanu said. “It invests in itself: it builds training camps and futsal halls, but it does not spread the money from FIFA and UEFA to the teams that need it.”

Sheriff’s presence in the group stage of the Champions League should be a chance to address that. The club itself will receive around $20 million simply for making it through the qualifiers; the FMF also will benefit from a handout from UEFA, a reward for having a representative at this stage of the competition.

There is little hope that money will make an impact on Moldovan soccer, though. The country’s academies are underfunded, its facilities poor. Everywhere except for Sheriff, that is. “It has an incredible academy,” Jardan said. “But it does not promote anyone. There are barely any Moldovan players in the team that will play in the Champions League. It is not a Moldovan team. It is not even really a Transnistrian one.”
For all that, there is genuine excitement at the prospect of Champions League soccer gracing even disputed Moldovan soil. Testemitanu regards it as a “dream come true.” He has tickets for Sheriff’s opening game, against Ukraine’s Shakhtar Donetsk on Wednesday, and he is hoping to get tickets for the visits of Inter Milan and Real Madrid, too.
He is willing to undergo the indignity of traveling to Tiraspol — being forced to show his passport at a border that his nation, and the international community, does not recognize, to be registered by authorities that still fetishize the iconography of the Soviet era — for the chance to see those teams. Jalba is the same: Seeing a team from the Moldovan league on this stage, he said, is “a source of pride, and a feeling of amazement.”

They know that it will come at a cost, but there is a fatalism, too: It has been like this for so long that it is easy to wonder what difference it could feasibly make. “The money from the Champions League will count for Sheriff, but even without it, it would have been the richest team in Moldova anyway,” Jalba said.

“The people who run the club do not care about the money,” Testemitanu said. “They already have money. They do not need $20 million. They control a whole country. It is about reputation, about being in that top league, in the Champions League.”
Now that Sheriff is there, though, now that it has finally made it, all that happens is that the difference is entrenched. The last wisps of the final shade of gray disappear, and everything becomes black and white.

This is what Sheriff has been waiting for; it is what the rest of Moldovan soccer might have been dreading. It crystallizes the inevitability of Sheriff’s winning the league, again and again, into perpetuity. Watching from Moldova, it is not a fairy tale about a plucky hero, but quite the opposite. It is the final victory of the giant. “For Moldovan football,” Jardan said, “this is the end.”