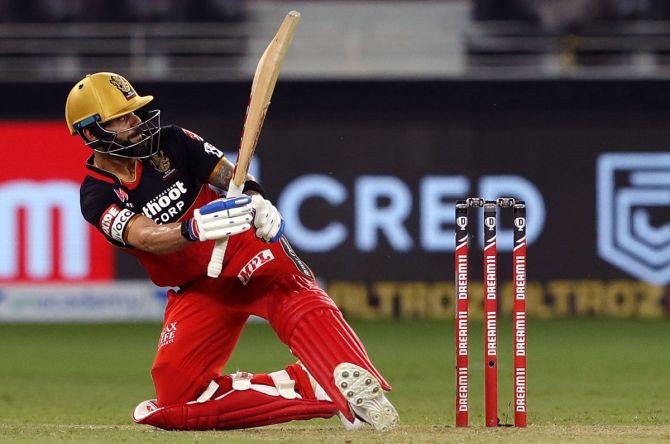 Virat Kohli had an indifferent start to IPL 2020, failing with the bat in his first three games.

Everyone knows you can’t keep a batsman of his class down for too long. He bounced back with a 53-ball 72 not out to guide RCB to victory against the Rajasthan Royals, but RCB suffered a 59-run thrashing at Delhi Capitals’s hands in their previous game.

Kohli knew that victory against the Chennai Super Kings was important to get RCB’s campaign back on track and he took it on himself to deliver with the bat.

After a slow start, the duo broke the shackles with a boundary each off Shardul Thakur in the fifth over, before Kohli hit Dwayne Bravo for a boundary with his trademark drive through extra cover.

Things got difficult in the middle overs as Padikkal (33) and A B de Villiers (0) both fell in the 11th over. Washington Sundar (10) didn’t make much of a contribution either.

RCB looked on course for a total around the 140-run mark as they reached 103/4 in 16 overs, before Kohli changed the complexion of the innings with amazing strokeplay in the death overs.

Watched by wife Anushka Sharma in the stands, he pulled Thakur for a four to race to his fifty from 39 balls, in the 17th over, and then slammed Sam Curran for a couple of sixes in the next.

Kohli gave Thakur the charge and blasted him for a straight six to keep the boundaries coming at the end.

Taking a cue from de Villiers’s book, Kohli also tried something new when he brought out the lap sweep against Bravo for a boundary, in the final over.

He finished unbeaten on a whirlwind 90 from 52 balls, with four sixes and as many fours, as RCB posted 169/4.

Courtesy Kohli’s quickfire knock, RCB scored 68 runs from the last four overs, a total which proved too difficult for CSK on a pitch that got difficult for batsmen in the second half.