South Africa’s in-form bowling attack made the most of friendly conditions to shoot out Bangladesh for a paltry 84 in the T20 World Cup Super12s match, in Abu Dhabi, on Tuesday.

Kagiso Rabada led the way, taking three wickets in the span of five deliveries in the Powerplay to have Bangladesh’s batting reeling early.

Bangladesh lost half their batters for just 40 on the board at the drinks break.

Going into Tuesday’s game, there was some pressure on Rabada, who had taken just two wickets so far and had gone for 32 runs against Sri Lanka. But he quickly put any concerns to rest with a fiery display of pace bowling with the new ball. 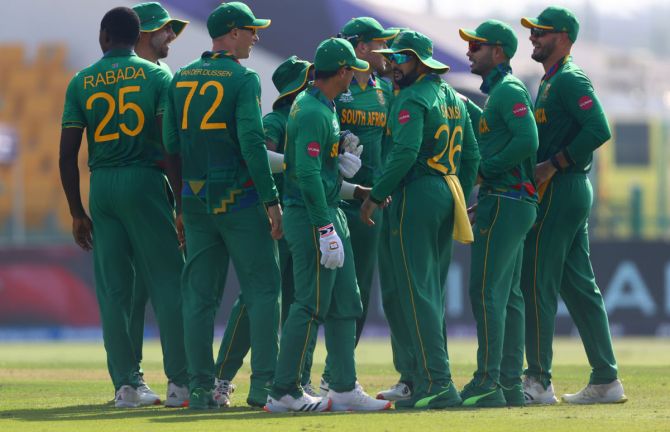 With a covering of dry grass on the surface and some help expected for the pacers, skipper Temba Bavuma chose to bowl. And while he then opened with the left-arm spin of Keshav Maharaj, it was Rabada who got the breakthroughs in his second over.

Mohammad Naim spooned a catch to midwicket, before Soumya Sarkar followed him back the very next ball, trapped in front by a beauty. Rabada bowled full, almost at a yorker length, and got it to move late into the left-hander. Sarkar was hit on the boot, and the wicket was given on review.

Returning for his next over, Rabada might have had a hat-trick, but the ball fell a few yards in front of the fielder at point.

But he needed just two more balls to pick up his third: Mushfiqur Rahim was surprised by the bounce and Reeza Hendricks at gully held on for a good catch. 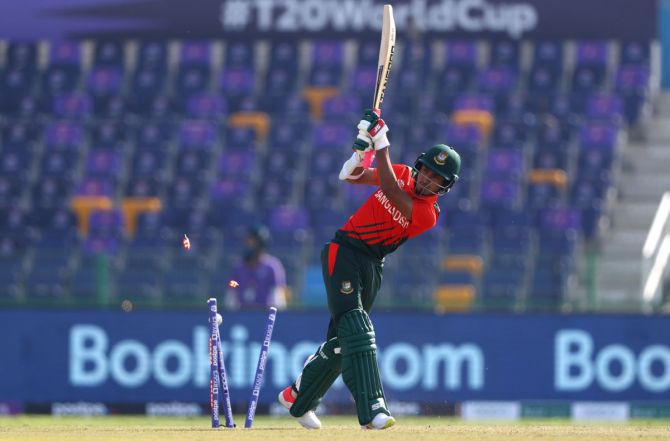 At 28 for 3 in the Powerplay, Bangladesh had endured another disappointing period of batting under the fielding restrictions. But it got no easier for them.

The in-form South African bowlers got good pace and bounce, as well as some movement, and were rewarded for it.

Anrich Nortje got Mahmudullah with a short one that rose on him, forcing the batter to fend and glove a catch. 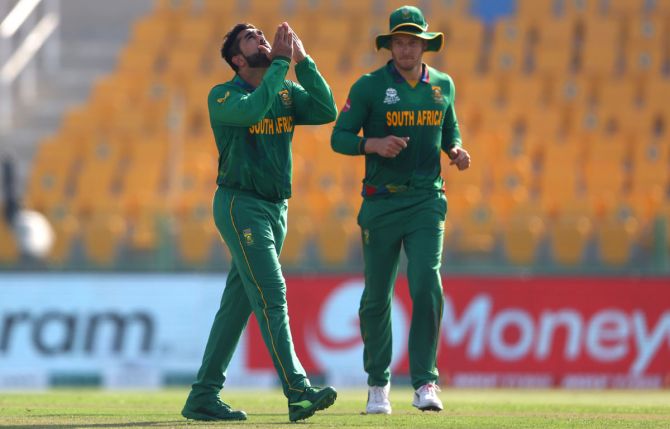 Then, Afif Hossain, looking to swing hard on his first ball, missed and the ball from Dwaine Pretorius thudded off his pad onto the wicket.

Even as wickets tumbled around him, opener Liton Das (24 off 36 balls), who got going with a four through covers off Rabada, held firm. But Shamsi needed just three deliveries to trap him lbw.

Mahedi Hasan (27) offered Bangladesh fans some entertainment with an aggressive 27 off 25 balls.

His three boundaries included a six over cover off Shamsi, but once he became Nortje’s second wicket, Bangladesh quickly folded.