‘I am a gadha (donkey)! But God has been on my side and I have managed to produce players,’ Dronacharya Awardee Merzban Patel tells Laxmi Negi/Rediff.com. 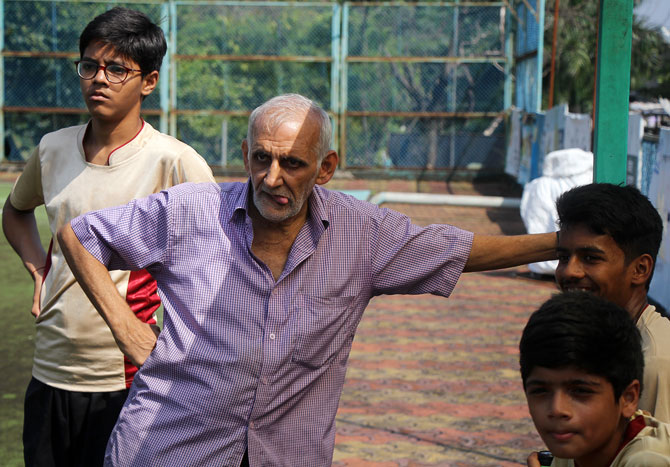 Every evening, at around 6.30, Children’s Academy in the north-west, Mumbai, suburb of Malad is abuzz. A small-built man makes his way into the school premises to impart hockey coaching to the kids.

On one such evening, I sit with Merzban Patel as he imparts some life lessons in a dimly lit bus parking area which is used as a hockey nursery. He does not complain about the lack of facilities, but says, “I have produced a National player (Suraj Karkera) from this very ground.”

Popularly known as ‘Bawa’ — a tribute to his Parsi ancestry — in Mumbai’s hockey circles, you can tell that the 69 year old has sat down for many such recent interactions, answered hundreds of similar questions and posed for the camera innumerable times.

Yet, his enthusiasm, which earned him the Dronacharya Award (lifetime category) last year for his contribution to the game spanning over three decades, is undimmed. He smiles constantly, the undeniable zest for life sparkling in his eyes.

You believe him when he says he has more than a hundred children and they adore him. So what if he is a bachelor! His players keep giving him a “good headache” and keeps him on his toes. On a bad day they nurse him and on a good day he is their father figure, their Guru. 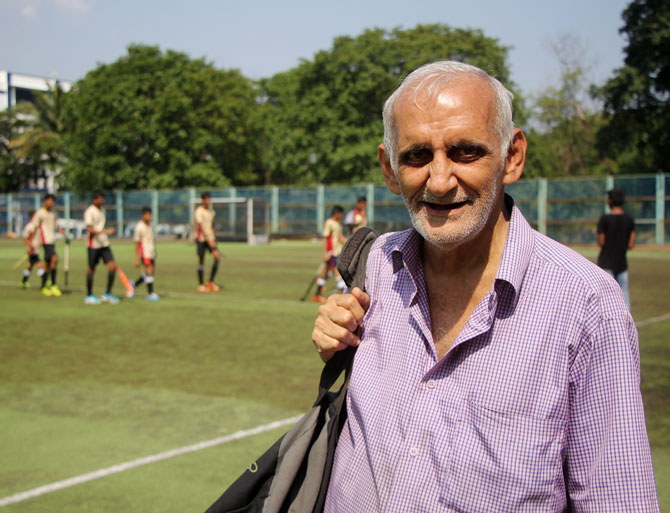 What attributes do you look for in a player?

It is more of an instinct. Now it is 40 years of experience and if a player is athletic, I pay more attention to him.

It can be any sport. The first thing a coach will look for in a player is whether he is athletically built. Unfortunately, in our country, it is not so. Here fitness level is naturally not up to the mark.

Also, nowadays, a player’s personality also counts a lot. His confidence on and off the field should be encouraging. Sometimes, his running style can say a lot about the player.

Even without a stick and a ball it is possible to make out that this boy can become a player.

We are just a small sports club (Apart from coaching at the Children’s Academy in Malad), Our Lady of Dolours at Marine Lines, south Mumbai, Patel is co-founder of the Bombay Republicans Club which participates in Mumbai tournaments and the local league. Therefore, I have always focussed on simple coaching. I don’t have any high-tech methods.

Do you think there is a viable professional career in hockey today?

No, not in the cities. Parents/students are more interested in an academic career. They treat it more as a hobby than a professional career. You can’t guarantee a job in hockey. Parents cannot be blamed for an emphasis on education.

Companies like Air India, BPCL, Indian Oil recruit players, but they have to be top notch. 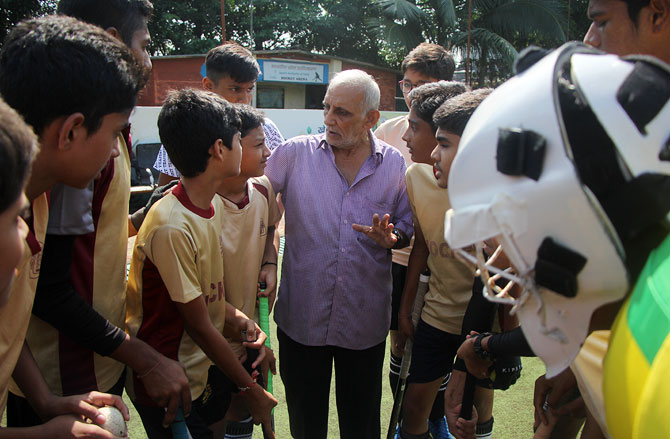 What is the ideal age for children to get involved in hockey? Are there enough opportunities for kids today to take up the sport?

Eight to 14 years is ideal. That’s the age you can realise whether you can become a player.

Our diet in the cities is so bad that it is difficult for the children to maintain fitness. They eat only Chinese food. One of the boys hadn’t tasted fruits for 15 years!

Only two schools have a hockey turf to practice in Mumbai. There are not enough tournaments. They hardly get to play matches. We are short on everything.

What influence do overseas coaches having on the national team?

I can’t answer that because I have not interacted with them. But they have a tactical mind. They are more polished and very systematic. That has been my observation.

What platforms are available at the national level for youth hockey?

There are not enough tournaments. In Europe, at the youth age group, players get to play 35 to 40 matches. It is not possible here.

Our culture is also different, we do not emphasise on sport.

If a child starts playing hockey, he expects a job in the hockey teams of bigger companies. That doesn’t happen in Europe. They work and play hockey.

There are hardly any facilities here. No floodlights after sunset.

Punjab has so many academies. Orissa and Bangalore also have reputed academies.

In Mumbai, there is no residential academy for any sport. Despite all this, we have managed to have so many international players.

Sometimes I imagine, if we had all the facilities, where we would have been! 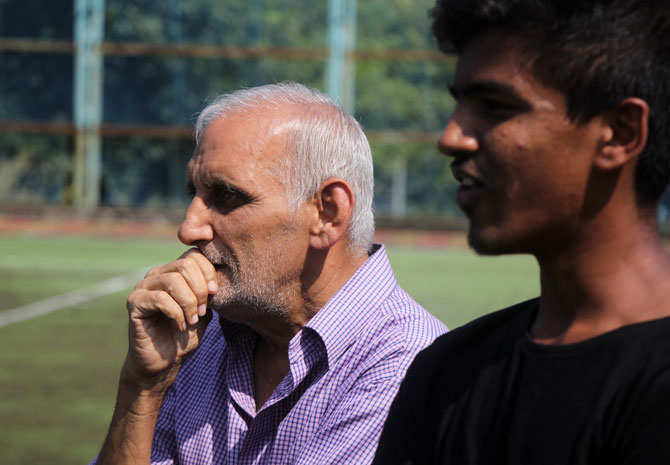 What role do former players play towards developing and promoting the game?

I have contacts with my old boys who help these kids. Some of my ex-students also help in coaching the senior boys.

What is the role of coach education in modern day hockey?

I am nobody. I am a gadha (donkey)! But God has been on my side and I have managed to produce players. People can call me gadha or anything, but I have got the Dronacharya in the first attempt, without any facilities to produce so many internationals. 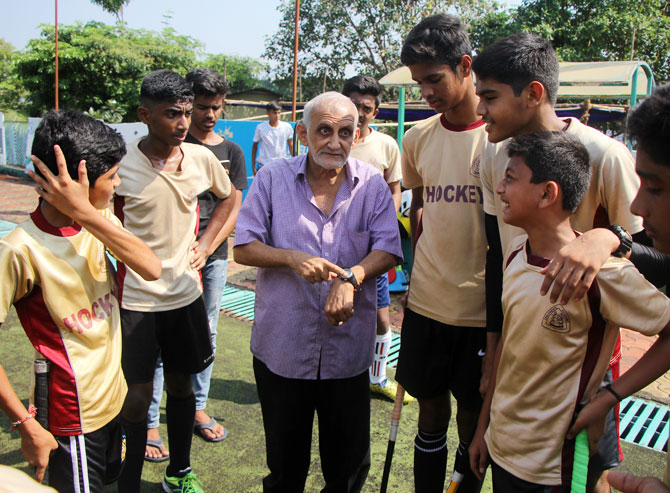 How much emphasis do you put on tactical preparation for your teams in the youth/grassroots age groups?

You can’t point out the boys’s mistakes. The best thing is to tell them to watch videos, recorded matches of major tournaments.

When there is a major tournament at the BHA (formerly the Bombay Hockey Association, now the Mahindra stadium) I take the boys to watch the matches. Technology is so high and we must take advantage of it.

Richard Hadlee used to watch Dennis Lillee’s videos 1000 times. You can’t teach the boy how to run. 20 per cent is natural talent.

Did you have to change your coaching style compared to the 1970s and 1980s?

My secret is I treat the boys like family. I am a bachelor, but I can boast that I have more than hundred children (loud hearty laugh).

I also keep the parents in the loop. Discipline is also important in my coaching. Today, I have to think twice while talking to the players. If I criticise too much, they can commit suicide. Things have changed a lot.

I am also of the opinion that education is the main stumble in the development of hockey. It is difficult for a player to be good in academics and be an exceptional athlete.

There are very few exceptions to that. It is a miracle in spite of so much focus on education there are hockey players coming in from Mumbai.

Another factor is quantity. If you have quantity, you will get quality.

The pool of players in Mumbai is very little and, therefore, we can’t contribute much to the national side.