Spain are second in Group A4 with eight points and must win Tuesday’s showdown at home to Joachim Loew’s side in order to progress to the final four of the UEFA Nations League. 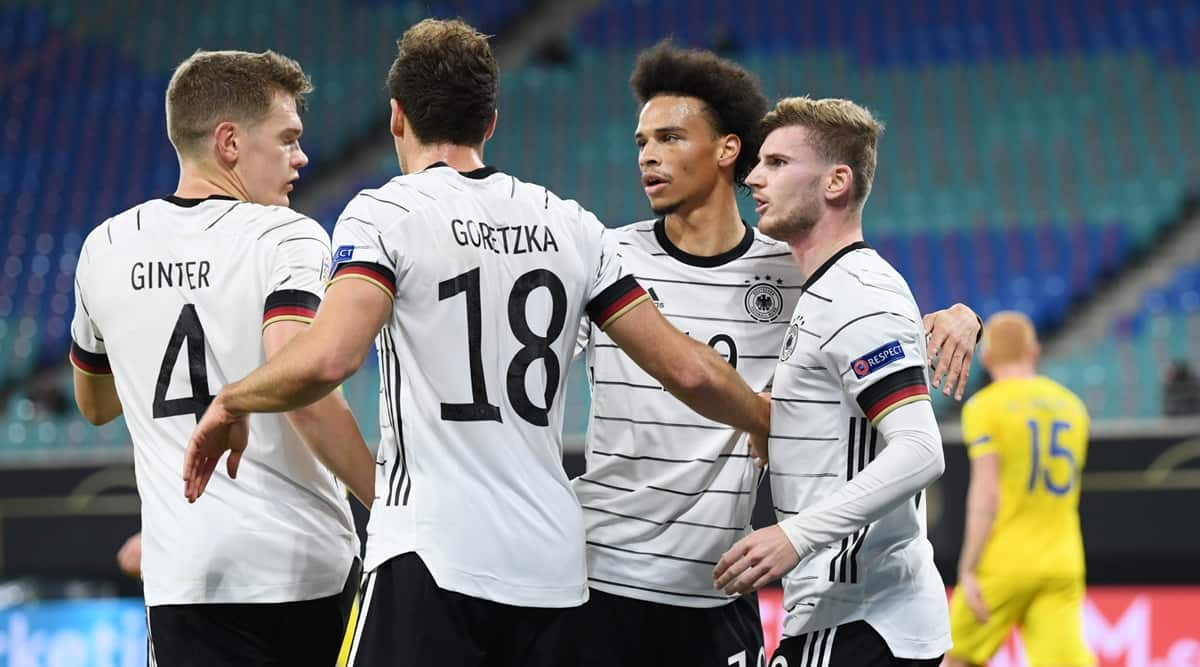 Germany striker Timo Werner scored in each half to help steer his side from behind to a 3-1 home win over Ukraine in the Nations League on Saturday as they topped the group with one round of games left to play.

Werner scored twice after Leroy Sane had cancelled out a surprise 12th minute lead for the visitors, who had four players, including top striker Andriy Yarmolenko, ruled out after testing positive for COVID-19 on the eve of the game.

The Germans, in the midst of an overhaul following their 2018 World Cup first round exit, are now top of Group A4 on nine points, one ahead of Spain who they visit on Tuesday. The top team qualify for the final four stage of the competition.

Ukraine, who hit the woodwork three times, are third on six points, with Switzerland bottom on three after a 1-1 draw with visitors Spain.

After getting the all-clear from Leipzig’s health authorities for the game to proceed, the Germans got off to a strong start but had to come from behind after Roman Yaremchuk scored against the run of play.

Leon Goretzka set up the next two goals, first launching a quick break and sending Sane through for the equaliser in the 23rd minute and then controlling a Robin Koch cross and lofting the ball for Werner to head the hosts in front 10 minutes later.

Germany, with their Bayern Munich contingent back in the squad after being rested in Wednesday 1-0 win over the Czech Republic in a friendly, still showed gaps in defence, having now managed just one clean sheet in their last seven matches.

They did not concede equalisers as in three of their previous five matches but were still lucky when Ukraine hit the post in the 53rd with Oleksandr Zinchenko’s deflected shot.

Werner fired home his second in the 64th before Ukraine hit the woodwork twice more through Marlos and substitute Junior Moraes in a strong finish. Spain captain Sergio Ramos missed two penalties but teammate Gerard Moreno came off the bench to grab a late equaliser and snatch a 1-1 draw away to Switzerland in the Nations League on Saturday.

The result relegated Switzerland and Spain lose top spot in Group A4 to Germany, who earned a 3-1 win over Ukraine and lead the standings with nine points.

Spain are second with eight and must win Tuesday’s showdown at home to Joachim Loew’s side in order to progress to the final four.

Ramos, who also became the most capped European player of all time, had scored all of his previous 25 penalties but was thwarted when Yann Sommer guessed the right way and repelled his spot kick in the 58th minute to preserve Switzerland’s lead.

The hosts had taken the lead in the 23rd minute through a brilliant strike on the half volley from Remo Frueler and could have doubled their advantage in the second half when Haris Seferovic rounded keeper Unai Simon, but Ramos came to his side’s rescue and got back to clear the shot off the line.

Spain then earned a second penalty in the 79th which led to Swiss defender Nico Elvedi being sent off for a second booking.

However, Ramos was again outwitted by Sommer, who could not be fooled by the defender’s chipped ‘Panenka’ penalty and caught the ball. It’s the first time Spain have missed two penalties in one match.

Substitute Moreno saved Ramos’ blushes in the 89th minute, lashing home a cross from Sergio Reguilon as Spain finally found a way past Sommer after firing 20 shots at goal to Switzerland’s seven.