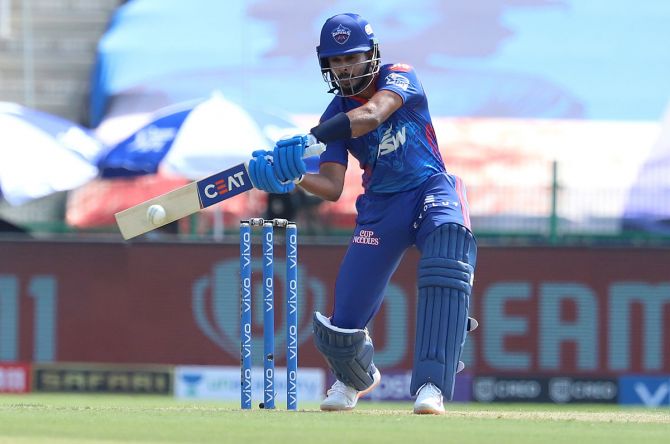 Shreyas Iyer missed the first leg of IPL because of injury and subsequently lost the Delhi Capitals captaincy but there is no shortage of motivation for the Mumbai batter.

Iyer played a crucial knock of 43 from 32 balls to lift Delhi Capitals to a 33 run victory against the Rajasthan Royals in Abu Dhabi on Saturday, September 25, 2021. He was named the man of the match for his superb knock under pressure.

Delhi were in a spot of bother on 21/2 after both openers — Shikhar Dhawan (8) and Prithvi Shaw (10) — perished cheaply, but Iyer along withb Captain Rishabh Pant put his team back on track.

He got going with a cracking cut shot off pacer Kartik Tyagi in the sixth over and then played his favoured straight six down the ground off leg-spinner Rahul Tewatia.

Tabraiz Shamsi also suffered as Iyer played the inside out shot for his second six. His 62 run stand with Pant was instrumental in Delhi’s recovery in the middle overs and helped DC push towards the 150-run victory on a wicket not so easy for batting.

Iyer fell to a brilliant piece of glovework by Sanju Samson who had him stumped off Tewatia in the 14th over.

Shimron Hetmyer played a cameo of 28 from 16 balls to help Delhi finish on 154/6, a total which proved too stiff for the struggling Royals batting line-up.

Even though Captain Sanju Samson stroked 70 not out from 53 balls, Royals were never in the hunt and as they struggled against Delhi’s power-packed bowling attack and finished on a below-par 121/6.