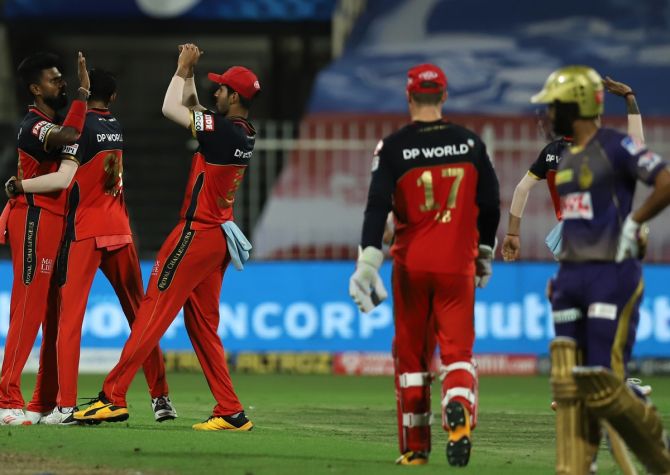 A B de Villiers’ devastating batting display inspired Royal Challengers Bangalore to an 82 run victory at Sharjah over the Kolkata Knight Riders on Monday, October 12.

But RCB had a bowling attack to defend the total.

They were clear in their minds what they wanted to do as they had read the pitch right.

Washington Sundar was top class and virtually derailed the KKR run chase with the prized scalps of Eoin Morgan (8) and Nitish Rana (9). He caused all kind of problems for the KKR batsmen.

KKR plunged into deeper trouble in the next over when Captain Dinesh Karthik was deceived by the googly and castled by Yuzvendra Chahal.

KKR star Andre Russell started hammering the ball all about the park, but all of it was short-lived as Mohammed Siraj, at extra cover, took a comfortable catch off Isuru Udana to send the big man back to the pavilion with a 10-ball 16.

The RCB spinners choked KKR for runs; and in the batsmen’s bid to make up the run-rate KKR lost wickets regularly.

Chris Morris (2/17) and Sundar (2/20) bowled tidy spells for RCB. Chahal was the most economical with figures of 1 for 12 in his four overs.

The victory takes RCB to third place in the league standings with 10 points from 7 matches, the same as table toppers Mumbai Indians and Delhi Capitals.