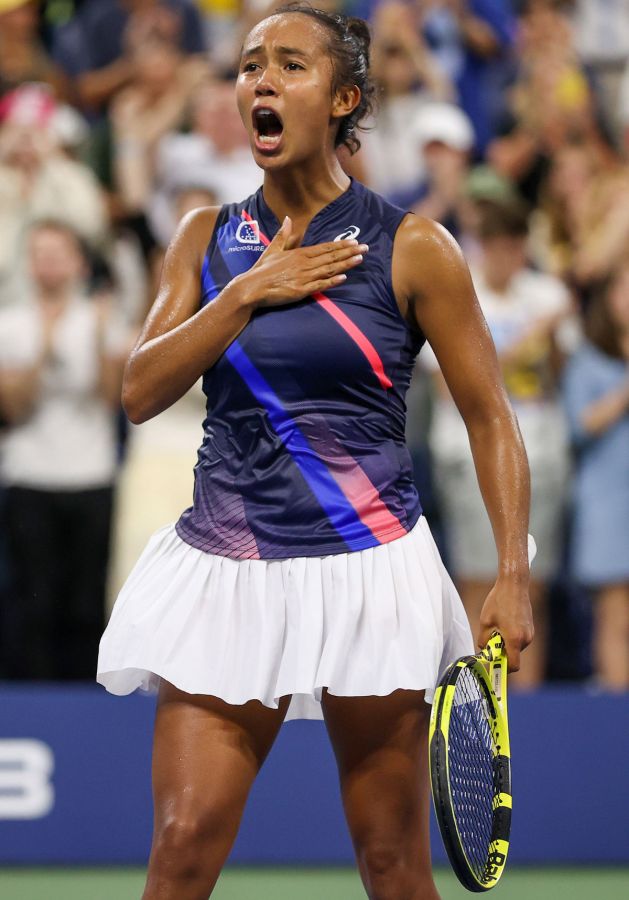 Leylah Fernandez brushed aside yet another former champion as the fearless Canadian teenager stormed into the quarter-finals of the US Open on Sunday with a 4-6, 7-6(5), 6-2 win over 16th seed Angelique Kerber.

It was a precocious and poised performance from Fernandez, who celebrates her 19th birthday on Monday and had already sent a jolt through Flushing Meadows on Friday when she stunned third seed and defending champion Naomi Osaka.

There would be no letdown for Fernandez after the biggest win of her fledgling career, the youngster soaking up the energy from a seething Louis Armstrong crowd after dropping the opening set to three-times Grand Slam winner Kerber.

“Honestly, the crowd has been amazing, so thanks to them I was able to win,” said Fernandez, who next faces fifth seeded Ukrainian Elina Svitolina.

“I was just trusting my game. She’s an incredible fighter, incredible player.

“Just putting one more ball back in, fighting, and just having fun on the court.”

Fernandez had grabbed the early break at 4-2 but could not consolidate it as Kerber, the 2016 US Open winner, broke right back with the help of a pair of double-faults by the Canadian.

Having made the breakthrough, the experienced German quickly took command, winning four straight games to open up a 1-0 lead.

But Fernandez remained unfazed, fist-pumping and screaming with each winner throughout a tight second set that went to a tie-break that she took 7-5.

Kerber, 15 years older than her opponent, countered Fernandez’s enthusiasm with veteran calm and focus, but it was the 73rd ranked Canadian taking charge in the third, sweeping the final five games to clinch a breathtaking victory.

“I think it was a tough one,” said Kerber. “I mean I gave everything I had today. She played I think an unbelievable match, especially in the third set.”

“I think she played also one of her best matches in her career, and she had nothing to lose. “She went out there, she played her tennis. She really is going for her winners.” 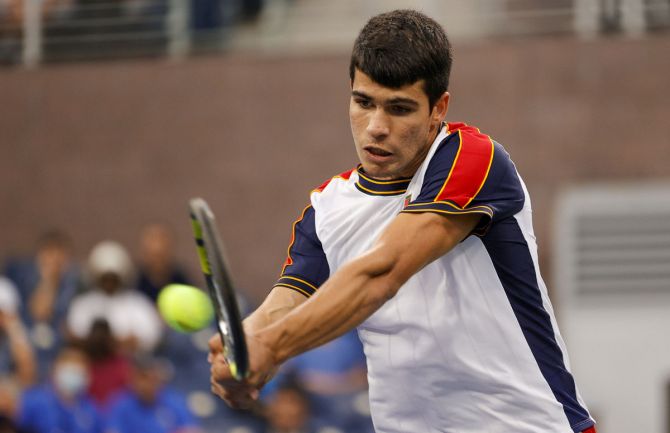 Carlos Alcaraz became the youngest player in the Open era to reach the quarter-finals of the men’s tournament at Flushing Meadows after the 18-year-old Spaniard beat Germany’s Peter Gojowczyk 5-7, 6-1, 5-7, 6-2, 6-0 at the US Open on Sunday.

Alcaraz, who is 18 years and four months old, is eight days younger than Andre Agassi when the American reached the 1988 US Open quarter-finals and semi-finals, according to US Open stats.

The Spaniard is also the youngest to reach this stage in New York since Brazilian Thomaz Koch in 1963, five years before the sport turned professional, when the tournament was known as the US Championships.

Gojowczyk, 14 years older than Alcaraz and playing in the fourth round of a major for the first time, made a bright start to edge the first set, but was hampered by an injury to his thigh and took a medical timeout midway through the fourth.

The German fought hard but faded badly as the match wore on, labouring behind the baseline as Alcaraz closed out the match with a bagel in the decider, sealing victory in three hours, 31 minutes when Gojowczyk sent a forehand sailing long.

Alcaraz smashed 35 winners and seven aces while winning 15 points at the net, feeding off the energy of the vocal crowd on Grandstand, while his opponent ended the match with a whopping 84 unforced errors.

“In the first sets I thought that I reached my limit physically and mentally. I think the crowd was really, really important for me in this situation,” Alcaraz added.

“I felt the energy of the crowd pushing me up… without the crowd, it couldn’t be possible to be here.” 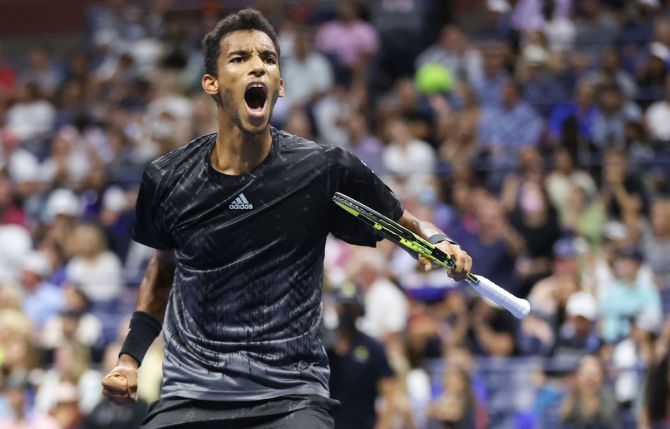 Felix Auger-Aliassime broke through Frances Tiafoe’s defences to win 4-6, 6-2, 7-6(6), 6-4 at the US Open on Sunday in a fourth-round battle between two of the sport’s brightest young talents.

Both players came into the tie at Arthur Ashe Stadium on the back of tough five-setters and it was 23-year-old Tiafoe who started the brighter, going up a break after the first game and shutting down all eight of the Canadian’s break point opportunities to go up 1-0.

Auger-Aliassime, 21, came roaring back in the second set, however, winning all but one of his first-serve points and making just four unforced errors to level the match.

Auger-Aliassime, seeded 12th, rocketed four aces in the ninth game of the third set and twice had a chance to close out the set in the 10th but American Tiafoe dug in his heels to hold serve and fire up his fans in the New York crowd.

Feeding off the energy, Tiafoe then went 3-1 up in a tiebreak but Auger-Aliassime battled back before clinching the final three points to close out the set.

Auger-Aliassime broke to kick off the fourth set and immediately fought off three break points to hold his own serve, going on to clinch the match with a forehand winner and reach his second consecutive Grand Slam quarter-final.

Tiafoe left the court to wild applause and his opponent praised his efforts.

“I understand supporting your fellow American — he deserves the applause, he’s done an amazing effort,” he said in an on-court interview.

Tiafoe said there had not been much between them.

“It was a tough start for me – a lot of nerves,” he said. “I played a great second set and then the third set was almost a coin toss.”

Next up for Auger-Aliassime is 18-year-old Carlos Alcaraz, the youngest male player to reach the quarter-finals at Flushing Meadows in the Open era.

“He’s a great player. At some point, age is just a number and he already feels like a player that’s established,” said the Canadian. 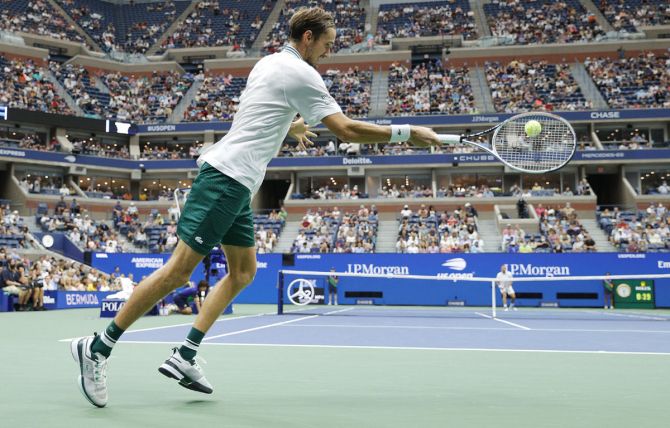 Daniil Medvedev fired off 13 aces to end British hope Dan Evans’ US Open challenge with a quickfire 6-3, 6-4, 6-3 victory in the fourth round on Sunday.

Evans had survived a fifth set tiebreak against Alexei Popyrin to reach the last 16 but on day seven of the hardcourt major, he was no match for the Russian second seed.

Evans handed Medvedev the early break with a double fault in the fourth game of the first set and never recovered from that setback as the Russian belted 43 winners.

Medvedev, who lost in the final to Rafa Nadal two years ago, closed out the final game of the second set in less than a minute with a pair of aces and a service winner and won all of his first-serve points in the third on Arthur Ashe Stadium.

He sealed the match in one hour and 43 minutes to roars from the rowdy New York crowd, which he won over in a remarkable transformation from villain to fan-favourite in 2019, reaching the quarter-finals for the third year in a row.

“I knew I had to keep my focus from start to finish. I was serving good,” said Medvedev. “I was trying to change up the game, mix up the game, and I’m really happy that I beat such tough opponent with that score and with that much energy left.”

He next faces Dutch qualifier Botic van de Zandschulp, who continued his unexpected run in the tournament by taming Argentine battler Diego Schwartzman 6-3, 6-4, 5-7, 5-7, 6-1.

Ticketholders looking to maximize their time inside Flushing Meadows’ famed stadiums would do well to steer clear of the world number two, as he has defeated each of his opponents in under two hours and has yet to drop a set.